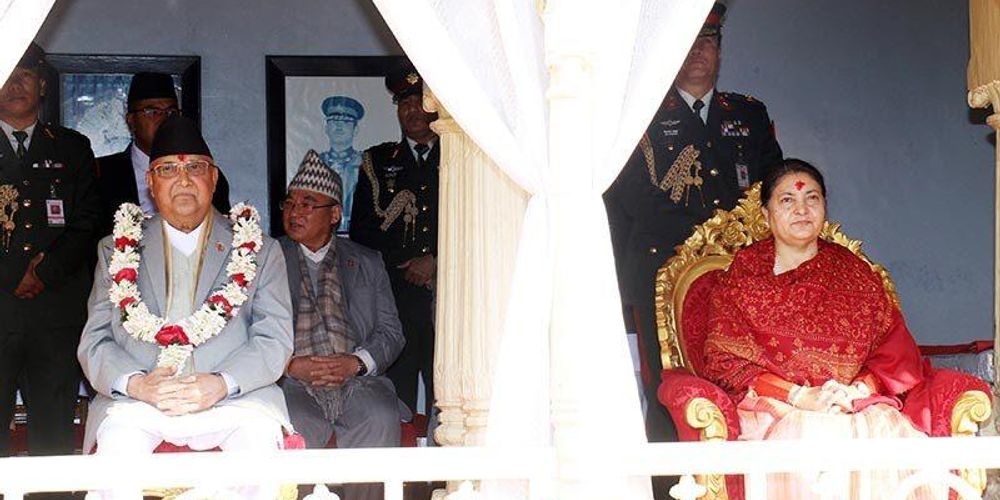 It has long been evident that Nepal’s political class does not care about the Nepali people. If the senior political leadership had any sympathy for the plight of the thousands of Nepalis currently battling Covid-19 in ill-equipped hospitals with a shortage of oxygen, medication and health care personnel, it would’ve put all else aside and attempted to tackle the raging pandemic as a united front.

But instead, what we get is this: a venal prime minister attempting to cling on to power, aided and abetted by an equally dishonest president.

Early Saturday morning, at almost 2am, President Bidya Devi Bhandari, acting on the recommendation of Prime Minister KP Sharma Oli, dissolved Parliament for the second time in less than six months, and declared elections for November 12 and November 19.

To understand how we got here, it is necessary to recall December 20, the first time Parliament was dissolved. Back then, Oli had said he was well within the prerogatives of the prime minister to dissolve the House and call for elections. President Bhandari had duly agreed, like she does with all of Oli’s actions. The Supreme Court, however, disagreed, overturning the dissolution on February 23 and reinstating the House.

Oli pushed on. After all, the House dissolution was only the first move in a drawn-out chess game that Oli had planned. If some pawns needed to be sacrificed for the king to stay king, so be it.

He called a vote of confidence for May 10, a vote that he was certain to lose. And he did. But the disgraced prime minister did not relent. President Bidya Bhandari, under Article 76 (2) of the constitution, asked the parties to form a government. But the opposition was unable to unite behind another party to stake a claim to the executive and Bhandari duly invoked Article 76 (3) of the constitution, reappointing Oli as prime minister in his capacity as leader of the party with the most Members of Parliament.

Read also: Prime Minister Oli has lost the vote of confidence. What does that mean?

But on Thursday, May 20, Oli asked the president to invoke Article 76 (5), without resigning or undergoing a floor test. The opposition parties and constitutional experts cried foul, but that did nothing to deter Oli and Bhandari. Article 76 (5) was invoked and Bhandari asked any member of the House with the ability to command majority support to put forth their claim.

A day later, on May 21, Sher Bahadur Deuba, president of the Nepali Congress, arrived at Sheetal Niwas, the President’s House, with signatures from 149 Members of Parliament from his own party, the Madhav Nepal faction of Oli’s UML, and the Upendra Yadav-Baburam Bhattarai faction of the Janata Samajbadi Party (JSP).

But Oli was already present at Sheetal Niwas, with the purported support of 153 Members of Parliament — all 121 MPs from his UML party and all 32 members of the JSP. He did not have individual signatures but declarations from himself, as chairman of the UML, and from Mahanta Thakur and Rajendra Mahato, Parliamentary Party leader and chairman of the JSP, respectively.

Deuba had individual support but Oli had party support.

The President’s Office said that Bhandari was seemingly unable to decide between the two candidates, leading Oli to once again recommend House dissolution under Article 76 (7), which states: “If the Prime Minister appointed according to clause (5) fails to get the vote of confidence or if any member fails to be appointed as Prime Minister, the President shall, on the recommendation of Prime Minister, dissolve the House of Representatives and fix a date to conduct another election within six months.”

Conveniently, this decision largely favors Oli, who despite failing the vote of confidence, will continue as caretaker prime minister until the elections are held in November. And during the elections, Oli hopes to capitalize on the disarray in the rival Maoist party and the lack of preparedness on the part of the Nepali Congress to gain a fresh mandate and once again, command government.

Whether Oli’s recommendation and Bhandari’s swift approval are constitutional remains to be seen. Constitutional experts have argued that Article 76 (2) mandates the support of political parties represented in the House but Article 76 (5) mandates the support of individual members of the House. If that interpretation holds then Deuba had majority support from individuals while Oli only had an expression of support from himself and the chiefs of the JSP. Oli and the JSP would’ve issued a party whip but it is again unclear if the whip applies in case of Article 76 (5).

This case too will likely end up at the Supreme Court and it will once again be up to the justices to decide whether Oli and Bhandari have acted constitutionally. The elections might not even be held as there is a very real possibility that Oli will use the pandemic to postpone the polls and continue in power indefinitely. This is not inconceivable, after all, both Oli and Bhandari have shown that they have no qualms shredding the constitution when it suits them.

Regardless, November is six months away. Given the manner in which the pandemic is progressing, it is unlikely that Covid-19 will have gone away completely by then. New infections still hover around 8,000 every day and nearly a hundred people are dying every 24 hours. Over 100,000 people are currently infected with the coronavirus, with many of them battling for their lives. Just 7 percent of the population has received one dose of the vaccines. Even as citizens and diplomats are begging the world for vaccines and medical equipment, the government will now begin preparations for an election that is likely to cost roughly Rs 20 billion. How can international actors trust a government that on the one hand begs for help all the while doing little-to-nothing to combat the pandemic and instead, declaring very costly elections?

Prime Minister Oli lost his legitimacy the moment he failed the vote of confidence. The moral thing to do would’ve been to step down and allow someone else to take the helm. Oli did neither. Even if he had remained in power but directed all attention to the pandemic, he could’ve garner support, at least temporarily. After all, a decisive government is necessary to fight a global pandemic. But he did nothing on that end either, besides writing a piteous article in The Guardian saying “We need help.”

The Nepali Congress’ Gagan Thapa did not mince words on social media, writing “This ill-tempered prime minister and hypocritical president have plunged the country into a dark tunnel. The traitorous duo that dared to commit such iniquity in the midst of a pandemic will not stop here. Leaders! Let's not get confused, let's not lose our footing, alongside conscious citizens, let's resist with all our strength the shameless acts of the President and the Prime Minister.”

A defining characteristic of Nepal’s leadership has always been callousness. Whether it was the Ranas, the Shahs, or the myriad Bahun men who came after, the welfare of the citizens — a concern for their right to lead dignified lives — has never figured on their to-do lists. Perhaps it is on us, those of us fool enough to think that maybe a once-in-a-lifetime global pandemic would lead them to put politics aside for once. We should’ve learned from the 2015 earthquakes, another once-in-a-lifetime event, when the political class seized on that tragedy to push through a constitution opposed by so many.

Now, the attention of all the political parties will turn to the election. If the Supreme Court allows the polls to go through, the pandemic will be forgotten, as will the lockdown, social distancing, and the prohibition on mass gathering. The campaign circuit will begin, with mass rallies across the country. Politicians will begin politicking.

And all the while, people will continue to die.