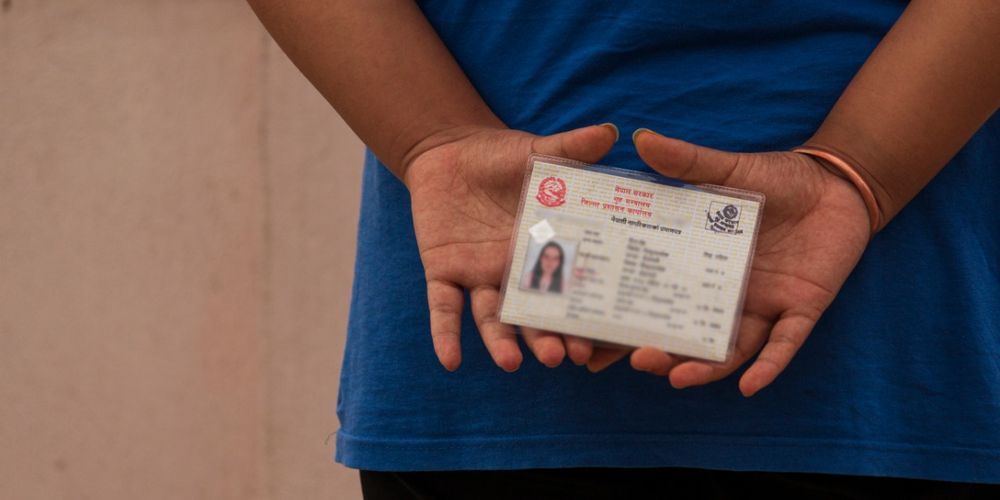 Monika tells me that she has been considering suicide. She is a 24-year-old woman from Bara district’s Kalaiya sub-metropolitan city with a Bachelor’s degree. Over the years, she’s watched as her friends have all obtained decent jobs and gone on to make a living for themselves but Monika, who I am identifying with a pseudonym to protect her identity, has not been able to find employment as she doesn’t have a citizenship certificate.

“My head hurts all the time,” she said. “The only way out for me is suicide because I don't have any means to survive.”

Monika’s father is a Nepali citizen by birth while her mother is a citizen by descent. As per the constitution of Nepal, she is eligible to obtain citizenship by descent but each time she and her 20-year-old sister have attempted to get their citizenship, they’ve been turned away.

Monika and her sister even filed a writ petition at the Janakpur High Court’s Birgunj bench. The court delivered its decision in their favor, issuing a mandamus order in the name of the Parsa District Administration Office (DAO) and the ward office to award them citizenship. But the ward office presented her with a circular issued by the Parsa DAO, mandating all local bodies to stop issuing recommendations for citizenship for those whose father or mother are citizens by birth, saying that the county has no legal provision for the children of citizens by birth.

Monika’s case exemplifies the plight of hundreds of thousands of Nepali citizens whose parents have obtained citizenship by birth.

But on 23 May 2021, a glimmer of hope came. President Bidya Devi Bhandari issued a Nepal Citizenship (First Amendment) Ordinance which has provisions in line with Article 11(3) of the Constitution of Nepal.

The issuing of this ordinance removed the legal and technical complexities for people like Monika. She could now be able to obtain citizenship as per the ordinance.

Unfortunately, on June 10, the Supreme Court issued an interim order to not implement the ordinance after six writ petitions were filed by advocates and political parties, demanding the ordinance be declared void citing long-term implications if the ordinance fails to pass through Parliament -- once the House is restored that is.

And until these issues are decided upon, people like Monika will not be able to exercise their legal rights. Once again, her future is stuck in a limbo.

Nepal’s new constitution, promulgated in 2015, includes significant clauses that address the granting of citizenship. However, the corresponding Citizenship Act has not been amended as per the constitution's provisions, nor has a new citizenship act been drafted.

Thus, citizenship issues have been exacerbated by legal and technical complications. Despite clear provisions in the constitution, the children of Nepalis who received citizenship by birth are not getting citizenship. Without this vital document, many of these children have been unable to get admission into the colleges of their choice, open up bank accounts or obtain a driver’s license.

Again, an advocate filed a writ petition demanding the same circular be nullified on the grounds that the citizenship certificates distributed by the Nepal government in 1998 could not be recognized. Regarding this writ petition, the court issued an interim order to not implement the circular. That year, only 43 people had obtained citizenship on the basis of birth.

The issue of citizenship once again became more and more controversial. The Supreme Court issued different orders in two cases and issued an interim order to maintain uniformity as there was ambiguity in the implementation of the court order. The matter was referred to a final hearing for resolution. But till date, the final hearing has not been conducted.

But ward offices and District Administration Offices have refused to issue Nepali citizenship certificates to these children, saying that the Citizenship Act and regulations have not been enacted as per the constitution.

This ordinance has provisions that are not in the Nepal Citizenship Act, 2063.

However, many believe the issuance of the ordinance was recommended byOli in an effort to win over the support of Janata Samajbadi Party who have been continually demanding for the bill to be passed for years.

And since the ordinance was issued just two days following the dissolution of the House of Representatives by Oli, many are raising concerns over its legitimacy.

But for the common Nepali, such political moves only add to the never-ending struggle to obtain a legal identity, which has many implications on their lives. For many Nepalis, as soon as they complete grade 12, problems arise when enrolling for higher education or to go study abroad. These Nepalis have been approaching the Supreme Court on an individual basis to be allowed to pursue their studies in Nepal or abroad. They even have gone to the court to be able to get jobs or open bank accounts.  Even though they are citizens as per the constitution, they have been forced to live as non-citizens in their own country due to technical reasons. They are being deprived of basic and fundamental rights.

But Damai is sadly an anomaly. The children of around 150,000 citizens who got naturalized citizenship are living without citizenship in the country. Nepali citizens are in a conundrum because the government and Parliament have delayed drafting citizenship laws in line with the constitution. The future of these children has been uncertain for a long time.

A person’s citizenship is not only a matter of identity and nationality, but also a matter of a person's right to live a dignified life. And the state has a duty and responsibility to ensure those rights are respected, as guaranteed by the constitution. And the path to it is quite clear: legitimately passing the Nepal Citizenship Amendment bill through Parliament as soon as possible. Only by doing so can the state be one of the people, one that does right by them.