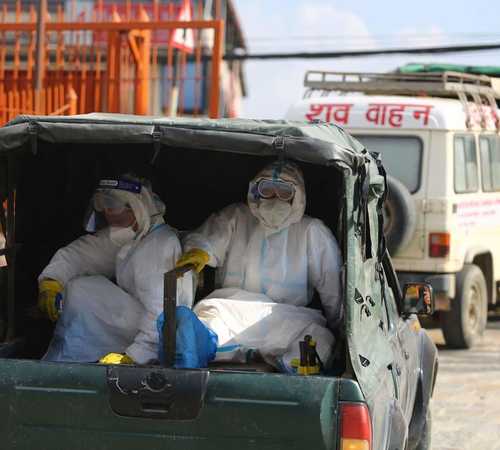 For several weeks now, health workers at Baneshwor-based Civil Hospital have been carrying out various protest programmes calling for an end to the widespread discrimination faced by temporary employees. The employees say the hospital administration is treating its temporary staff as second-class workers, even as their counterparts hired under the Public  Health Service of Nepal government enjoy better pay, perks, and facilities. The employees have demanded that all staff, irrespective of the nature of their contract, be given equal pay, perks, and facilities. They are also threatening to stop regular work--or even quit en masse--if their demands are not met.

In Lalitpur, Patan Hospital--a public, not-for-profit tertiary academic institution--is already struggling to stanch the hemorhagging of its employees. Since mid-August, at least 30 employees of the hospital have quit their jobs, while around a dozen are on unpaid leave. Fearing more resignations in the future, the hospital administration has been mulling over creating guidelines that will prevent more workers from quitting. Patan Hospital is one of the biggest institutions offering Covid-19 treatment in Kathmandu Valley.

These are recent examples of how the growing discontentment among Nepal’s health workers is pushing major hospitals to the brink of a major crisis--at a time when the country is exceedingly dependent on them to recover from the Covid-19 pandemic.

It's hard to get the exact figures, but more than 300 health workers have already quit since the onset of the Covid-19 pandemic. And such cases are expected to increase given the gradual rise in the spread of coronavirus among hospital frontline staff.

According to the Ministry of Health and Population, a number of staff at all hospitals providing frontline treatment have contracted coronavirus, with at least one confirmed Covid-19 induced death of a doctor.

The disaffection among health workers, especially those working in private hospitals outside Kathmandu, is believed to be far worse. On Aug 24, at least 150 doctors of private hospitals in Birgunj had announced they would resign en masse after their demand for higher pay and facilities went unheeded. The doctors only returned to their duties following assurances from local bodies that their demand would be looked into.  They have demanded, among other things, Rs 60,000 per month in salary for each doctor, insurance cover of NRs 2.5 million, hospital-funded quarantine facilities, and guarantee of PPEs. Hospitals in other cities like Chitwan, Dharan, Biratnagar, and Dhangadi have been seeing similar protests. And earlier, in that same month, more than 350 health workers of Birgunj-based Narayani Hospital had tendered their resignations, demanding safety and security for hospital staff. The resignations were later withdrawn.

Even before this pandemic, the country’s health sector was already under scrutiny for its discriminatory treatment and the wage gap among health workers. Health workers with government jobs have long enjoyed far better pay and perks than those working in private hospitals (even temporary health workers at government institutions get paid better). The government hospitals also provide a better social security net and have been giving their workers a risk allowance.

Most health workers in the private sector are not getting timely salaries, let alone risk allowances.

Many private hospitals have not been able to pay staff salaries on time owing to a lack of resources. For instance, Patan Hospital, a semi-autonomous entity that runs on the fees raised from patients, has seen a massive fall in revenue due to disruptions to their (outpatient department) OPD and in-patient services. The hospital used to receive around 4,000 patients daily, but their OPD services have remained near defunct for months due to the lockdowns and the general fear of spread of the virus. The hospital now receives around 500 patients a day, generating far too little revenue to meet its payroll costs for around 1,500 staff. Similarly, other hospitals like Dhulikhel Hospital and BP Koirala Hospital Dharan, both of which are highly dependent on internally raised revenue, are also facing a revenue crunch.

It’s a no secret that the Oli regime and its predecessors have long given better treatment to saffron-clad gurus and matajis than to health workers. Such unwarranted treatment has incensed many in the health sector. As it is, the cost of medical education is skyrocketing, and it's becoming harder for health workers to find jobs with decent pay. For nearly a decade, Dr Govinda KC has been fighting against the commercialization of medical education. Meanwhile, shamans and charlatans are receiving better treatment from society, while health workers are being castigated and expelled for contracting the virus on the job.

But rather than working to address the genuine grievances of health workers, the Oli government has been turning a blind eye to their plight. And the health ministry has been further fueling the discrimation with policies and programmes that favour only government workers. In March, the ministry endorsed a guideline on providing risk allowance to the manpower engaged in the fight against Covid-19--to boost the morale of frontline workers. But the guideline has  excluded tens of thousands of health workers of private hospitals, creating widespread dissatisfaction in the health sector. MoHP officials seem to be aware of the looming crisis but are doing next to nothing to address the concerns because of budgetary concerns and because they do not have a say in the decision-making processes.

Nepal’s health workers are already overburdened. The health sector only has around 16,432 doctors and around 70,000 nurses: that’s far too few personnel for normal times, never mind a pandemic. Thus the degrading morale of health workers is extremely worrying--especially because it comes at a time when the pandemic has been spreading like wildfire, without sparing anyone, including top officials in the Oli government. As of Sunday, Nepal has 84,570 Covid-19 confirmed cases and 528 coronavirus deaths.

The emergence of the new variant has thrown many countries into panic, with many of them, including Nepal, imposing travel restrictions on passengers from South Africa.