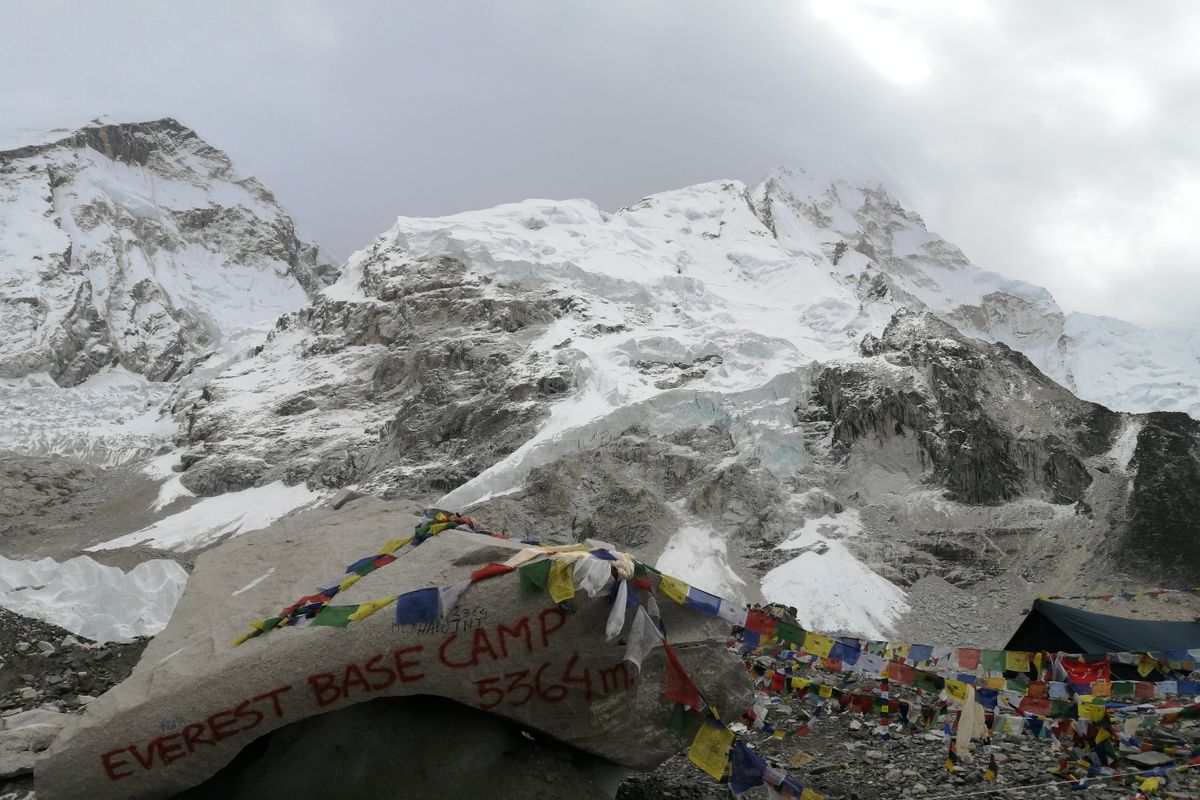 Everest click taken from its base camp in the autumn of 2019. (Photo: Birat Anupam)

Mount Everest is not just the tallest peak on the planet but with Nepal to the south and Tibet to its north, it is also the tallest international boundary. Everest is where travelers from China do not need a Nepali visa, and vice-versa. But Everest is an emotional issue, both in Nepal and Tibet. In Nepal, the peak is called Sagarmatha, meaning ‘'the goddess of the sky’ while in Tibet, it is known as Qomolangma, which means ‘The goddess mother of the world’. The Chinese too have adapted the Tibetan name for the peak to Zhumulangma. These names alone provide insight into Everest's deep-rooted cultural, religious, and spiritual connection to countries on either side of the Himalaya.

Although popularly known as Mount Everest to the outside world, the name itself only came into existence in 1865 when the British Royal Geographic Society named the peak 'Everest' after the former surveyor-general of India, George Everest. Reportedly, Everest himself was in favor of using local names but the surveyors of the time were unable to find a local name. These days, Nepal and China officially use their native names for Everest, at least when it comes to Everest-related bilateral diplomacy.

The first Everest attempt was made from the Tibetan side in 1921. However, the first successful Everest summit was achieved on May 29, 1953 from the Nepali side by Tenzing Norgay and New Zealander Edmund Hillary. The Everest summit was possible only after three decades of attempts and three years of the human summit of the first eight-thousander, Mt. Annapurna, on June 3, 1950.

It was only after the peak was first submitted that Everest gained global attention, leading both Nepal and Tibet to stake their claims to the peak. At that time, however, the border around Everest had yet to be demarcated.

Everest diplomacy: from conflict to collaboration

At the time of the first historic summit of Everest, Nepal and China did not have diplomatic relations. It was only a couple of years later, on August 1, 1955, that Nepal and China first established diplomatic relations. It would take almost six more years for Nepal and China to initiate formal border talks, a major bottleneck to which was Everest. Ownership over the peak was not only debated in the press and among the people but also at the highest political levels. China's Supreme Leader Mao Zedong himself took a personal interest in the Everest issue.

When BP Koirala, Nepal's first democratically elected prime minister, made an official visit to China from March 11 to 22, 1960, a heated debate over Everest ensued. The debate has been recorded by both the Nepali and Chinese sides. According to the Nepali records, illustrated in a book by Jagat Nepal called ‘Pahilo Samsad’ (First Parliament), Koirala addressed a press conference on April 4, 1960 after his visit to China and informed the Nepali people about the Everest debate.

Hinting that Chinese Prime Minister Zhou Enlai had claimed the entirety of the mountain, Koirala said, “But, we have staked our claim. This needs to be sorted out by [the] joint border committee.” Koirala also retells the Everest debate in his autobiography.

The Chinese side too has recorded the heated debate between Nepal and China in a book called Mao Zedong on Diplomacy, compiled by the Chinese Ministry of Foreign Affairs and the Party Literature Research Center under the Central Committee of the Communist Party of China, and published by Foreign Languages Press Beijing in 1998.

The book details the talks between the Nepali delegation led by Koirala and the Chinese side by Mao, held on March 18, 1960. Also involved in the dialogue were Nepal's Home Minister Shailendra K. Upadhyay and Chinese diplomats Pan Zili and Luo Guibo. The Everest issue figures repeatedly in the six-page dialogue between Koirala and Mao, as reproduced below:

Koirala: To you, the currently disputed places are of no importance, while they matter to us. It is a question of prestige.

Mao: Don't worry. They can be solved.

Koirala: There is another question, a question of sentiment. We call it Sagarmatha, the West calls it Everest and you call it Qomolangma. This place has always been within our territory, but Premier Zhou Enlai said it was within yours.

Mao: You should not feel uneasy about it.

Koirala: It is a sentimental question.

Koirala: How about the mountaintop?

Mao: Half for each side as well.  Will that be all right? If it cannot be solved now, we may postpone it as well. The mountain is very high and it can safeguard our security at the border. Neither of us will suffer losses. If all of it is given to you, sentimentally we shall feel sorry. If all of it is given to us, sentimentally you will feel sorry. We can have a boundary marker on top of it.

Shailendra K Upadhyay: Who is to do it?

Upadhyay: In the past, mountain climbers had to have a Nepalese [sic] visa.

Mao: A mountain climber from a third country intending to climb from your side may obtain a visa from your country.

Pan Zili: In the past, mountain climbers had to have a permit from [the] local government of Tibet when they wanted to climb it from Tibet.

Luo Guibo: In the past, some foreign mountain climbers obtained visas from our embassy in Switzerland.

Mao: The long-term practice is that to climb from Tibet, one has to get a permit from the local government of Tibet. The mountain can be renamed. We shall not call it Everest; that was a name given by Westerners. Neither shall we call it Sagarmatha, nor shall we call it Qomolangma. Let us name it Mount Sino-Nepalese Friendship.

Based on this dialogue, which is titled ‘The Sino-Nepalese Border should be peaceful and friendly forever’ in Mao’s book, Nepal and China inked the Nepal China Boundary Agreement on March 21, 1960, and a year later, the Nepal-China Boundary Treaty was signed on October 5, 1961 during the official visit of Nepal's King Mahendra, who was in China from September 26 to October 19, 1961.

Mao: How is everything with Your Excellency? Have all the problems [been] solved?

Mahendra: Everything is settled.

Mahendra: Yes. We all agree.

But the role of Everest in Sino-Nepali diplomacy does not end with the win-win border demarcation. Decades later, the agreement would culminate in a joint height announcement after separate measurements, the first of its kind in the history of Everest.

On May 22, 2019, a Nepali survey team led by surveyor Khim Lal Gautam with the support of Tshiring Jangmu Sherpa reached the peak to carry out observations and measurements. A year later, on May 27, 2020, a Chinese team reached the same summit for observation.

But despite measuring the height of Everest separately, the two countries decided to announce the new height together. This declaration was a very visible outcome of Chinese President Xi  Jingping's state visit to Nepal from October 12-13, 2019.  Following Xi’s visit, Nepal and China issued a 10-point joint statement on October 13, which announced that the height of Everest would be jointly announced by the two countries.

Point eight of the statement reads, “Recognizing that Mount Sagarmatha /Zhumulangma is an eternal symbol of the friendship between Nepal and China, the two sides will promote cooperation in different fields, including addressing climate change and protecting the environment. They will jointly announce the height of the [sic] Mount Sagarmatha/Zhumulangma and conduct scientific researches [sic].”

The new height of Mount Everest — 8,848.86 meters — was finally jointly announced during a virtual program hosted by both Kathmandu and Beijing on December 8, 2020. Everest had grown 86 cm taller from its previously accepted height of 8,848 meters.

Thus, Everest has come to symbolize the changing nature of Sino-Nepal ties — going from a fractious relationship of conflict to one of mutual collaboration.

Birat Anupam   is senior English-language journalist at Nepal's official news agency- National News Agency and senior reporter at nepalpress.com. Based in Itahari, he mostly writes on tourism, diplomacy and the environment. His bylines outside Nepal have appeared in The Diplomat, The Daily Star, The Third Pole, among others.

With Occupy Tudikhel Nepal gets an opportunity to question larger forces that are shaping it physically, and politically.