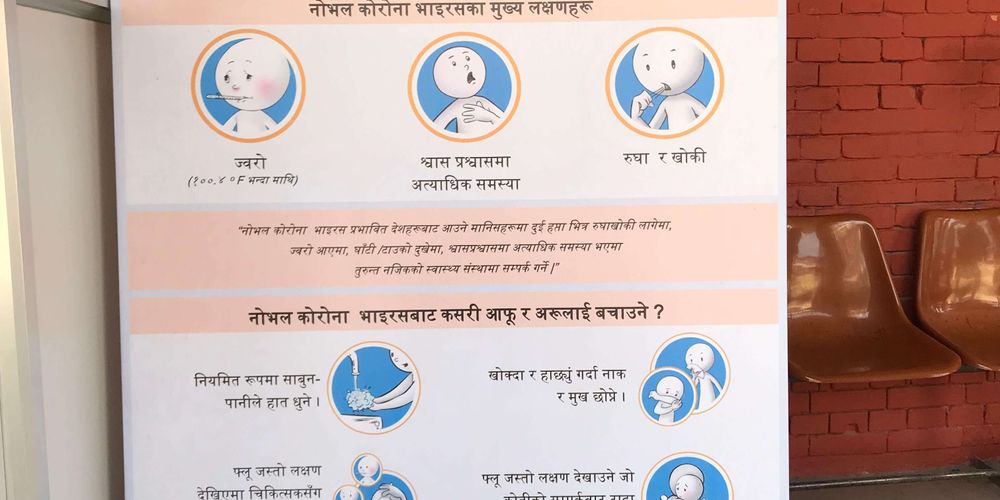 According to media reports, the virus has claimed nearly 9,000 lives and affected over 200,000 people in 150 countries. But authorities here say Nepal does not have any active case as of 19 March.

After long weeks of inaction as the crisis spread in China, Iran, and Italy, the government of Nepal has finally woken up, and is taking one decision after another to prevent a possible outbreak.

On 18 March, the eve of the first day of the Secondary Education Examination (SEE), the government announced an indefinite postponement, and also deferred all other upcoming university examinations. Similarly, all educational institutions have been told to shut down.

Following worldwide examples, Nepal has restricted the entry of all passengers, including Nepalis, coming in from European Union, UK, West Asia and the Gulf region from 20 March until 15 April. Earlier, the travel ban applied only to tourists coming from China, South Korea, Japan, Italy and Iran, or those using these five countries as transit.

Now, travellers coming from all countries will have to undergo a mandatory 14-day quarantine.

Prime Minister’s Office Secretary, Narayan Bidari, on March 19 said that the ban also applies to Nepali workers coming from various work destinations. There has been huge social media uproar against the decision which is likely to affect an estimated 2 million Nepalis.

The government has cancelled all trekking and climbing permits for mountains including the revenue churning Mt. Everest until 15 April. Minister for Culture, Tourism and Civil Aviation Yogesh Bhattarai told the Record the decision could be reviewed based on developments.

Locally, authorities have urged the general public to maintain social distancing, and gatherings of more than 25 persons have been restricted. Similarly, all recreational venues like stadiums, cinemas, theaters, bars, gyms, swimming pools, museums and clubs will have to remain closed until 30 April.

Long after facing criticisms for lack of preparation and control, the central government has decided to collaborate with government hospitals, community hospitals and private hospitals to facilitate the treatment of those infected or showing symptoms of the coronavirus disease. The government is to bear expenses for such treatments and local administrations across the country have been directed to make similar arrangements.

Taking heed of many reports by the media, the government has decided to intensify a campaign against black marketeering that has resulted in a shortage of essential goods and commodities like masks and sanitisers.

Fuel and food items are in short supply mainly due to hoarding by consumers and black marketeering by sellers. Panic buying amidst rampant misinformation about the coronavirus has also contributed to the scarcity of essential commodities.

In the Capital authorities have raided various places and seized nearly four million masks hidden by various profiteering retailers and wholesalers. The confiscated masks are to be made available for sale soon.

Transport operators, hoteliers and restaurants have been urged to pay necessary attention to cleanliness and sanitation. Concerned authorities have been directed to monitor these activities.

The government is hashing out plans to provide packages for businesses affected by the coronavirus. The outbreak has particularly affected the hospitality, tourism and aviation sector, although all sectors, including foreign employment and big infrastructure projects, have started to feel the impact.

The government will renew the visas of foreigners who haven’t been able to return home due to travel restrictions and flight cancellations. Such travellers have been asked to consult the Department of Immigration before their visas expire.

Koilabas: a town left behind

Along the Nepal-India border lies a place where history runs deep, but the future is uncertain