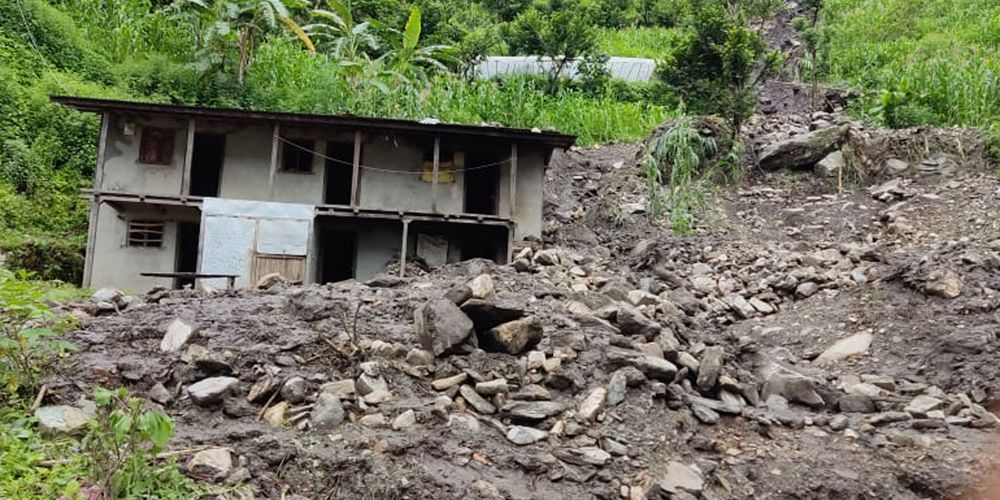 With the monsoons, come the disasters.

Following last year’s monsoon, which saw major floods and landslides triggered by heavy rainfall claim the lives of over 300 people, June and July of this year have been similarly marked by seasonal flooding-related deaths, destruction, and displacement. Like clockwork, this monsoon also saw a predictable spike in conversations around climate change, disaster resilience, and national carbon emission reduction targets.

In the year-and-a-half period since the beginning of 2020, which has been so fundamentally dominated by the Covid-19 pandemic, the Nepal media’s attention has been surprisingly focused on environmental issues. In the first six months of 2021 alone, Nepal has seen persistent droughts across the country that set off record wildfires, multiple non-simultaneous instances of hazardous air pollution in urban centers, concerns over the legalization of harmful resource extraction processes like sand mining, and the most recent Melamchi area floods and landslides.

The last six months have played out like a carefully planned cascade of environmental crises, each connected to the last, aiming to remind the country of the urgency of the climate crisis. Despite having one of the lowest per capita carbon footprints in the world, Nepal is often counted among the nations most vulnerable to climate change. Given its unique topography, diverse geography, and the fact that it is landlocked — global media attention is often reserved for island nations facing the threat of rising sea levels — Nepal’s climate change predicament is often a superficially acknowledged footnote in most international forums.

But make no mistake. Climate change is here and it is going to radically define Nepal’s future. There will be more extreme weather events and the conversation will take center stage in politics and industry. This year so far stands as evidence of the scientific community’s long-standing warnings playing out in the present. And landslides are a major piece of the puzzle.

The towering mountains of the Himalaya, and the rivers that flow downstream from them, are the result of a massive collision between the landmasses of what we now know as the South Asian, or the Indian Subcontinental, and the Eurasian plates. Given that both the continental landmasses had competitive rock density levels, one plate did not become subducted under the other when the collision took place some 40 to 50 million years ago, creating the upward contortion that formed the Himalayan peaks.

The seismic vulnerability of the Himalaya is a direct result of the physical stress accumulated in the plate boundary during and since this collision, causing natural hazards such as soil erosion, landslides, and earthquakes. The 2015 earthquakes reinforced the connections between the mountains, earthquakes, and soil health across the continent, but the dimension of climate change caused by carbon-emitting human activity has yet to enter the conversation in the mainstream.

A 2011 report published by the United Nations Food and Agricultural Organization ranked Nepal seventh in landslide fatalities, behind China, Indonesia, India, and other Asian nations. However, when adjusted for the proportion of population affected, Nepal ranked first in the world.

A February 2020 NASA Goddard Space Flight Center study used satellite estimates to model future projections based on historic precipitation data to assess landslide frequency and intensity risk. They found that warming temperatures were causing more intense rainfall in various areas across mountainous Asia and predicted a rise in landslides by about 30 to 70 percent. Even more worrisome was the revelation that the delicately balanced annual patterns of High Mountain Asia’s water cycle is itself changing, triggering future shifts in monsoon rainfall patterns, calling into question how much damage these floods can cause when they become unpredictable.

Landslides are certainly not a novel, or even surprising, phenomenon in a country with as many slopes as Nepal. With elevations ranging from less than 100 meters to over 8,000 meters across districts, Nepal has eight different climate zones, from tropical plains in the south to northern areas of perpetual snow. In such a terrain, landslides do occur naturally and mechanize processes that define long-term changes in the landscape. They can be initiated by a number of different causes, often a combination of rainfall, snowmelt, stream erosion, earthquakes, and human activity.

One anthropogenic cause of increased frequency and intensity of landslides is the process of building roads, which rashly cut into unstable natural slopes in the relatively young Himalayan range. Research has shown that poorly planned roads built on fragile land, characterized by low soil strength and ever-shifting tectonic plates, are responsible for the recent increase in landslide deaths in Nepal’s hilly regions.

Global warming is another factor. As the air heats up, it is able to hold more moisture. Consequently, the air sucks up more water from lakes, streams, soils, and plants with time, leaving behind drier conditions which can cause long periods of drought. Once the atmospheric moisture reaches a particular threshold, the rainfall that follows is significantly more intense.

This is terrible news for the health of the relatively young and fragile mountains of the Hindu-Kush Himalayan region. Extended periods of dryness cause plants to wither and the soil to weaken over time, threatening long-term impacts on agricultural output. When it does rain, it is so intense that it causes the weakened soil to break quickly, further weakening the earth, causing the cycle to become more intensified with each season.

Experts cite various hurdles in the management of monsoon disasters, including inadequate governmental monitoring mechanisms, insufficient disaster preparedness at the local level, poor recordkeeping, and unchecked economic incentives to invest in poorly planned road construction and resource extraction projects. At the heart of the inaction is the system of using resources to respond to the damage caused by seasonal floods, instead of actively building resilience against them during off-season periods.

The Supreme Court’s recent order to reinstate Parliament brings with it a feeling of political renewal in the country. Still, revolving-door leadership at the executive office and election plans on the horizon suggest it may yet be naïve to expect a recalibration of political priorities amidst the ongoing pandemic and annually worsening environmental conditions.

Glaciers are retreating across the Himalaya and this is bound to have significant consequences for the ecology of the region and the livelihoods of its people.