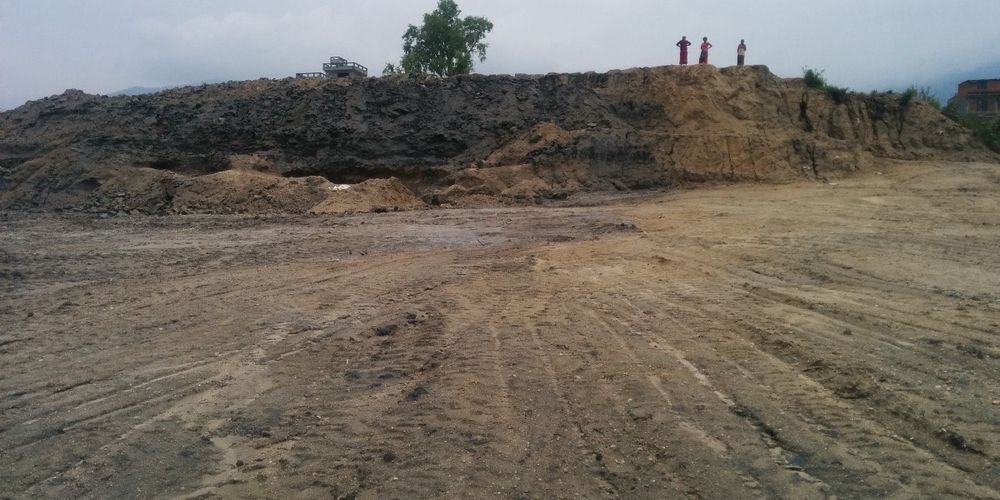 In a recent chat over chiya, Pitamber Sharma, a geographer-planner by degree and a well-known public intellectual, described the slum as a “Janus-faced” place: on the one hand, the decrepit disorder that an onlooker observes from atop the bridge of the Bagmati—a makeshift settlement that looks out of place—and on the other, the rhythmic pattern that imbues its everyday life with a sense of place and community. Two different optics narrating two diametrically opposed stories about the same space.

But it’s not just the slum; one could think of the city itself as Janus-faced. One face is described through the world of policy: visions, master plans, and by-laws that appear rooted in phantasms, such as the “sky rail,” “satellite city,” or “smart city”—that other-worldly lexicon that somehow finds a warm embrace within the corridors of power called the state. The other face is variously inscribed and myriad: the mundane rituals of the everyday life of people and objects that are in constant motion. Rise, run, return, rest. Repeat. There is multiplicity in this rhythm that together makes the city tick. It breathes life into the city and turns it into a functional composite. This is the everyday life of the city itself. For the urban poor, a constituency of this composite called the city, this realm of everyday life is governed less by policy and more by politics, whether that means claiming territory on a sidewalk to set up shop or occupying a vacant land in the city to make (a shelter) and shift. However, once in a while, there is a break in this rhythm, whether by design or default, which creates an opening that forces one to think differently about the ability of the poor to make it in the city. This is the story of one such break.

The relationship between the Nepali state and the sukumbasi, or the urban landless, has historically been adversarial. The former sees the latter as an illegal eyesore in need of relocation, preferably outside the realm of visibility, while the latter sees the former as wrongly conflating poverty of place with poverty of people—meaning, illegal occupation of land does not make a population illegal, nor its demands illegitimate. This conflicting system of beliefs—the former borne of duty and desire, the latter of constraints and compulsion—puts the state and the sukumbasi always at loggerheads.

The earthquakes of the 2015 spring, however, created a break in this trend. Purano Chaur*, or Old Ground, a three-decade old Dalit settlement in the north-west end of the city, nearly three kilometers away from the Ring Road en route to Budhanilkantha, was one of the many settlements ravaged by the disaster. Quite counter-intuitively, instead of using the earthquakes as the precursor to permanently erase the Dalit sukumbasi settlement from the city’s map, the municipality sent out a call to the residents of Purano Chaur to rebuild it. One may read this benevolent gesture as a case of the disaster instilling a spirit of humanitarianism in the heart of the state. There are other sub-plots too. For example, when the rule of law is temporarily suspended, as it was in Purano Chaur through the municipal call, and there is no policy to guide planning, what becomes the governing logic is everyday politics—the everyday organizing that is assembled on an ad-hoc basis to bypass, subvert, and resist the system. Since such politics is assembled informally and outside the system, the tactics deployed are at the mercy of an actor or two, to whom I now turn. In Purano Chaur’s case, this actor goes by the name of Siddhi.

An influential local figure of Purano Chaur, Siddhi wears many hats, all at the same time. A Dalit himself, Siddhi began his activism for Dalit rights in Nepal nearly four decades ago through a movement that is loosely connected to the Communist Party of Nepal (Unified Marxist-Leninist). He is also a political figure who has, over the years, risen through the party ranks and is a member of the party’s federal committee. Through this journey, he has now harnessed a political and social capital that allows him to find access to the municipality, as well as wield social influence locally. The rebuilding of Purano Chaur began once Siddhi conveyed to the locals a message from the municipality: “Go ahead and build what is necessary; we will pretend that we are unaware. We will look the other way.” For all the state’s magnanimity, rebuilding still had to take place in the gray spaces of fear and uncertainty—there were no meetings with the municipality’s officials, no written account of the official endorsement, and no formal assurance of immunity from potential threats of eviction.

Once the message was received, many wanted to immediately start rebuilding. They feared losing the land, knowing full well the informal nature of such magnanimity. They also feared how the land could potentially draw private interest after it was leveled for construction. It could serve as a spawning ground for the speculative land market to enclose what the Dalit residents perceived as the urban common. All eyes rested on Siddhi to allay these fears. He waved them away, literally waving his hands sometimes, as if the fears did not warrant a verbal response. Still, the locals would record all meeting minutes and get the attendees, including Siddhi and members of the Citizen Ward Council, to sign a register. These minutes and signatures were meant to serve as evidence of the state’s tacit complicity, just in case.

Everything had to be done quietly. In one of the local meetings, one resident called out another: “Please delete the status update about Purano Chaur from your Facebook page.” In another meeting, an attendee discouraged any links with donor agencies and NGOs: “They like to make announcements and publicize.” The rebuilding was mostly funded through grassroots initiatives. The emphasis on organizing quietly was meant to draw zero attention from all forms of sundry interest—the state, the market, and the developers. “Once the rebuilding is over, and the families have moved in, we will announce openly with a big noise,” declared another.

The announcement was indeed big. Government officials, NGO representatives, journalists, and political leaders were all invited to a ceremony in Purano Chaur that marked Griha Prabesh, the homecoming of the families. The invitation was also tactical; their presence would add to Purano Chaur’s legitimacy.

Nearly a year after Siddhi brought the municipality’s life-changing message to Purano Chaur, the rhythm of everyday life in the community is gradually being reclaimed. Rise, run, return, rest. Repeat. Siddhi intimates that in response to the message he brought, Purano Chaur sent a message to the municipality in return: It is possible for sukumbasi to legitimately find a place in the city. The message has a subtext: It is possible, albeit by subverting the extant rule of law, disfiguring the face of neoliberal policy, and disrupting the logic of private property.

*The names of people and places have been changed.

Nepal-China railway will not change geopolitics in South Asia