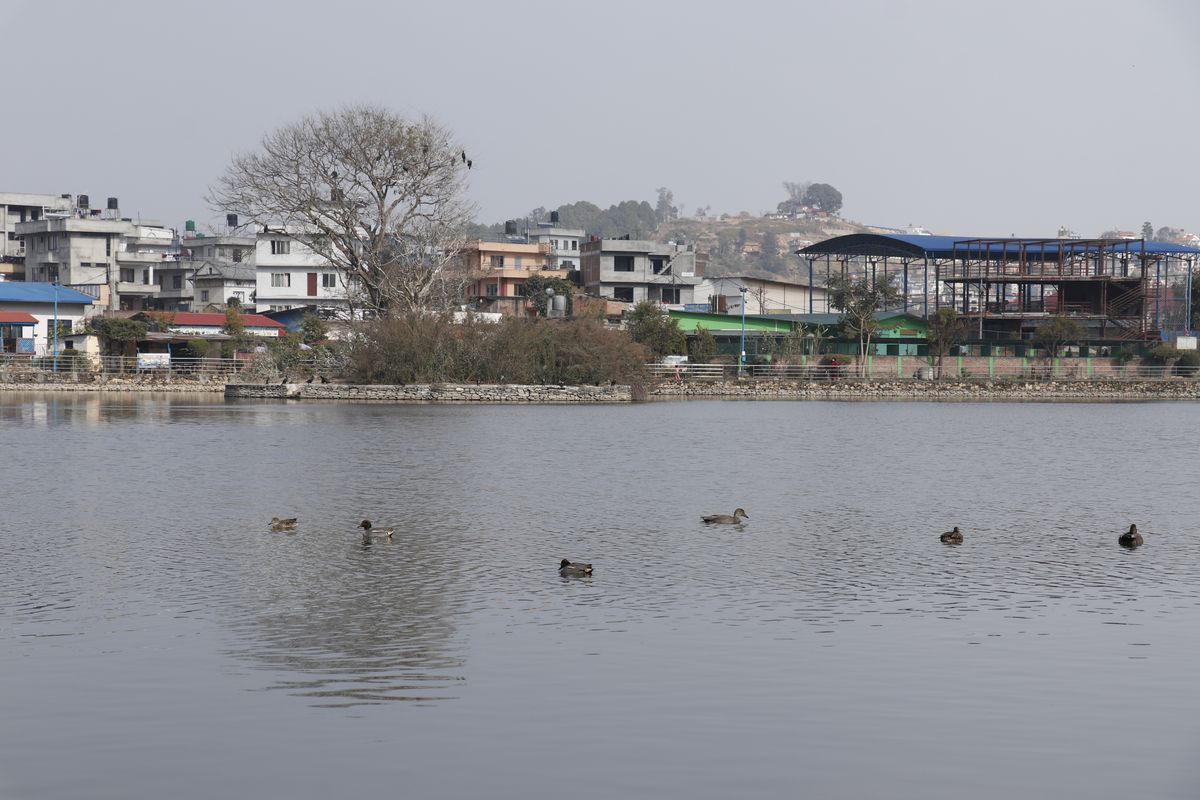 As one of the largest ponds in the Bagmati watershed, Taudaha is home to several species of lotus flowers and water chestnut, and supports an intricate ecosystem of a variety of amphibians, reptiles, birds, and fish. ( Newton Maharjan)

The last remaining natural lake in the Kathmandu Valley, Taudaha was a beautiful, emerald oasis nestled amid lush fields. Situated in the south-west corner of the valley, the lake covers an area of 463 hectares and has great religious and cultural significance. It also holds great ecological importance. As one of the largest ponds in the Bagmati watershed, it is home to several species of lotus flowers and water chestnut, and supports an intricate ecosystem of a variety of amphibians, reptiles, birds, and fish. It also holds particular significance for migratory birds.

But over the years, the lake has been commercialized to such an extent that the swampy lake is almost unrecognizable to what it was just a decade or two ago. A concrete pathway, which was constructed in 2013, lines the lake, along with numerous restaurants, and the small island on the lake’s left corner, crucial for migratory birds to rest and recuperate, is all concrete now. The lake, once a hotspot for migratory birds, has had its natural habitat depleted so much that it has affected the arrival of these winged guests from abroad.

Every winter, birds migrate to Nepal via the Central Asian Flyway, which runs between the Arctic and Indian Oceans and encompasses a wide continental area of Europe and Asia. The lake is home to birds visiting from Tibet, China, Korea, Mongolia, Siberia and central Asia. Birds such as the Common Coot, the Great Cormorant, the Common Teal, the Eurasian Wigeon, the Gadwall and the Mallard are some of the prominent species that could be sighted at Taudaha. Among other species, the Bar-headed Goose, the Ruddy Shelduck, the Spot-billed Duck, the Northern Shoveler, the Northern Pintal, the Common Pochard, the Red-crested Pochard, the Tufted Duck, the Ferruginous Duck, the Black-headed Gull, and the Lesser Black-backed Gull have been reported over the years.

Changes over the years

Since 2007, species such as the Great Egrets and the Little Grebes have not been seen in the area. The Common Moorhen, which had not been seen since 2007, was recorded once in 2014 and has not been seen since. Researcher Arend van Riessen's study (from 2013-2016) identified seven different duck species in Taudaha; however, the bird census from 2019-2020 identifies only six species.

Nationally threatened species such as the Black-headed Gull Larus ridibundus, the Common Pochard Aythya ferina, the Ferrugious Duck Aythya nyroca and the Northern Pintail Anas acuta have been spotted in Taudaha, highlighting the importance of the area as a wintering ground for migratory birds. In addition, the record of species like the Smew in 2021, which is a vagrant species for Nepal, has shown the importance of the wetland. The pink-headed duck was once reported from the Taudaha area too, which is assumed to be extinct globally.

What can be done to combat this?

The Taudaha wetland provides a winter home for many diversified avifauna. But the avian heritage of this landscape is under threat due to unregulated human activities resulting in habitat destruction and fragmentation. We have seen massive concrete overhaul of the lake in the name of its ‘beautification’. Such constructions have been one of the major reasons for the decline in arrival of migratory birds. The use of colorful lights on the trees in which birds shelter has forced some birds like cormorants take refuge in nearby network towers.

The line of restaurants and use of powerful sound equipment around Taudaha Lake is also a matter of concern. Loud noise causes a wide range of impacts on birds, including ear damage, an increase in stress response, changes in forage or call responses, and even a fight-flight reaction. Birds rely on communication for a variety of reasons, including reproduction. But because of artificial noise pollution, birds can be forced to adjust their call frequency or loudness, as shown in various research work, genetically altering their behavior.

Suitable habitats are vital for migratory birds, as they provide the areas necessary for feeding, resting and breeding. These birds cover enormous distances, sometimes thousands of kilometers.

Yet, migratory birds continue to visit Taudaha, showing the need of preserving the place before the birds cease visiting. To ensure anthropogenic causes do not come in the way of the migratory birds’ natural processes, a number of actions can be implemented. For instance, the few old trees that still stand near the lake should be saved and more trees and local plants that attract birds should be planted. Loud noise should be forbidden during specific months, notably during the winter when migratory birds come. A longer-term action should be to market Taudaha as an educational hub rather than as just another commercial hub.

The decline in visits by migratory birds should sound alarm bells for Taudaha’s future. And the local and national body should take heed. An urgent and massive effort is required to revive this wetland for the protection of water birds, before the numbers dwindle any further and cause any further ecological damage.

In two weeks, the birds taught me many things: to be compassionate, to be kind, to be angry even. But most of all, to love with patience.