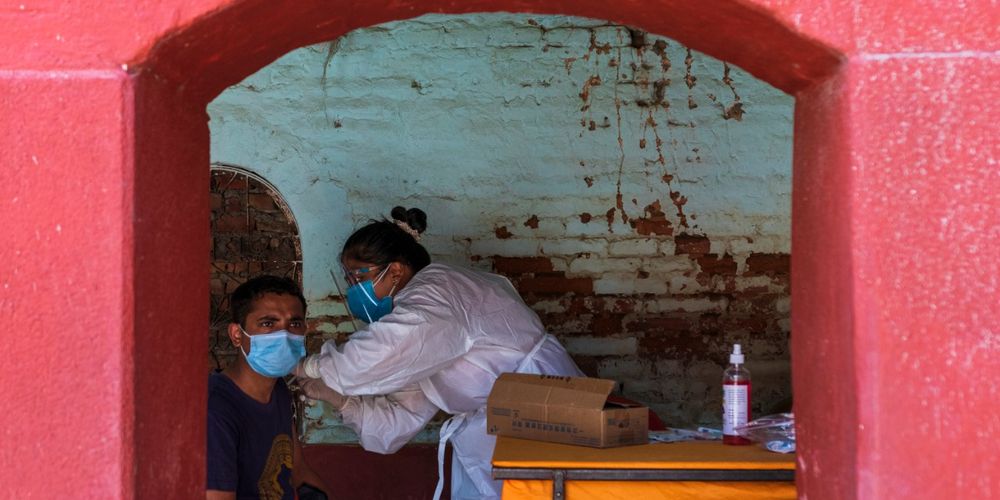 Nepal has so far managed to vaccinate 2,113,080 people with one dose and 614,113 with both doses. With the ongoing vaccination drive, which is providing second doses of the Chinese Verocell vaccine, just about 2 percent of Nepal’s population is now fully vaccinated.

But with the inoculation drive ending, so is Nepal’s stockpile of vaccines. With the Verocell hoard exhausted, there are no more vaccines to give out.

On Wednesday, Chinese Ambassador to Nepal Hou Yanqi announced on Twitter that Chinese President Xi Jinping had agreed to provide Nepal with 1 million vaccine doses in a phone conversation with President Bidya Bhandari. It remains unclear which vaccine this will be, whether the Sinopharm Verocell or other Chinese-manufactured vaccines.

While these vaccine doses will help, they will not be enough to vaccinate the 20 million people who need to be inoculated. For the rest, Nepal has currently two options for vaccine procurement — wait for COVAX, the global vaccine sharing alliance, to come through with a supply, or try to reach out directly to donor countries and manufacturers and hope for a donation or make a purchase.

The first option guarantees vaccines, but it is just a matter of when. Nepal received 348,000 doses of the AstraZeneca Covishield vaccine on March 7 through COVAX. That shipment was “part of the total 1.92 million doses of the vaccine that the COVAX facility had committed to provide Nepal by the end of May 2021,” according to Sharmina Manandhar, communication specialist at UNICEF in Kathmandu.

However, this is unlikely as we are already nearing the end of May 2021 and COVAX has reportedly told the Nepal government that it will be unable to deliver vaccines before next year, according to The Kathmandu Post.

While COVAX is co-led by CEPI, GAVI and WHO, UNICEF is the delivery partner.

When asked what a likely timeline for the arrival of the COVAX shipment was, Manandhar did not provide a date or a time frame.

“COVAX partners are in discussions with the Serum Institute of India to get a better understanding of what the vaccine forecast will look like from now until the end of the year,” Manandhar told The Record over email.

Manandhar pointed out the increased demand for Covid vaccines in India, along with “vaccine nationalism, limited production capacity and lack of funding,” as reasons behind Nepal’s failure to source vaccines through COVAX and otherwise.

“We are urging countries with excess doses to share those doses as an immediate stop-gap measure,” said Manandhar.

Many citizen groups and organizations, both in Nepal and abroad, have already been lobbying countries like the US, UK, and Australia, along with the European Union, to donate part of their massive vaccine stockpiles to Nepal. While the US has said that it will be giving away 60 million doses of the AstraZeneca vaccine that it has ordered, there is no word yet as to where those doses will go.

Over the past week, numerous media outlets have also reported of 2 million vaccine doses being donated by the UK government. This, however, is a misrepresentation, according to the British Embassy.

“There has been a lot of misreporting on vaccine supply,” said Tom Adams, head of chancery at the British Embassy in Kathmandu. “The UK has provided £548m into COVAX and vaccines will be allocated to all developing countries through the COVAX facility. As the Ambassador has said, the UK’s contribution to Nepal’s vaccines is through this substantial funding to Covax.”

The 2 million vaccine doses are Nepal’s allocation under COVAX for the first phase; they are not being provided by the UK government out of its stockpile. British Ambassador to Nepal Nicola Pollitt made a similar comment on social media saying, “To clarify confused media reporting on vaccine donations: UK support to Nepal is through #COVAX.”

Like Manandhar, Adams too was unable to shed more light on when vaccines might be available in Nepal, saying only that the UK government was “working with partners – including WHO and UNICEF – to make sure that supply is allocated to Nepal as quickly as possible.”

The Record then asked WHO, as one of the co-leaders of the COVAX facility, as to when vaccines might arrive in Nepal but the WHO office in Nepal was also unable to provide a timeline.

“Discussions are going on between COVAX partners and the Serum Institute of India on what the vaccine forecast will look like from now until the end of the year,” the WHO said in a response emailed to The Record.

WHO went on to say what Manandhar had said: “Along with our partners we are strongly encouraging countries with excess doses to share them with the COVAX facility and discourage vaccine nationalism.”

COVAX’s inability to obtain vaccines has even led to its asking the Nepal government to pursue other vaccines besides Covishield. The government in turn has asked COVAX to supply it with any vaccines that are available.

“Because it is hard to get the Covishield vaccine for now, we have requested the COVAX facility to send other vaccines too,” said Dr Jhalak Gautam, chief of National Immunization Program.

This, however, leaves 1.3 million elderly people who’ve received the Covishield vaccine in limbo. Health authorities do not recommend mixing and matching vaccines and more Covishield doses are unlikely to arrive.

As a global alliance, COVAX must look at all countries equitably and thus cannot prioritize Nepal, no matter the lobby. According to WHO, vaccine doses are allocated through COVAX under a Fair Allocation Mechanism where “participants receive doses proportionally to their total population”. In the first phase, doses will be given out to participants until all COVAX members receive enough vaccines to inoculate 20 percent of their population.

“The rate at which participants receive vaccines depends on country readiness and the availability of doses (not on threat and vulnerability),” says a WHO document outlining the allocation mechanism.

As Nepal was one of the first countries to receive a COVAX shipment, it is unlikely to be a priority to receive another shipment when other COVAX members have not received their first supply. Furthermore, COVAX itself is under stress as donor countries have not provided enough vaccines to share globally. Global vaccine production too is at a standstill due to hoarding by wealthy countries like the US, UK, Canada, and Australia. This situation has led to some countries having enough doses to vaccinate their population two or three times over while other countries, like Nepal, don’t have enough to vaccinate even the most at-risk population.

“Vaccine equity is the challenge of our time,” said Tedros Adhanom Ghebreyesus, WHO director-general. “And we are failing.”

As it appears unlikely that COVAX will come through with additional doses by the end of the year and countries with large stockpiles have not outlined mechanisms to share their stockpiles, Nepal will likely have to pursue the second option — attempting to purchase vaccines directly from the manufacturer. This, however, could be an exercise in futility as vaccines not yet produced have already been purchased by rich countries, with even countries like India struggling to procure enough doses for its population.

Read more: The die has been cast

Past attempts to negotiate a purchase with American manufacturers like Pfizer, Moderna, and Johnson & Johnson have been unsuccessful. Despite news reports stating that Nepal had inked a deal with Johnson & Johnson to procure 5 million doses of its vaccine, there is little evidence of any progress.

“We are talking to Johnson & Johnson about procuring vaccines but no definite deal has been made as of yet,” said Dr Samir Kumar Adhikari, spokesperson at the Health Ministry. “If the deal is made, Nepal will receive the doses directly, not through the COVAX facility.”

This article has been updated. Quotes attributed to a WHO media officer have been updated to the WHO Nepal team in general upon request.