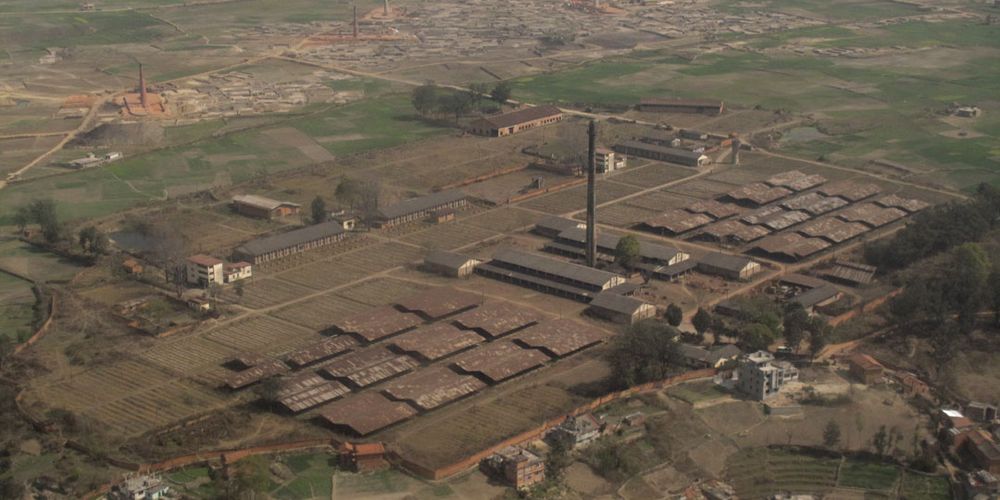 By any standard, it was a story that any editor would have loved to run. Khojtalas, a Nepali language daily newspaper based in Kathmandu, ran a front page story on July 27 with a headline: NCP leaders' vulture's eyes on Harisiddhi land, minister's nephew threatens to transfer land revenue's staffs. Once the story came out, Raju Basnet, the editor and publisher of the paper, and his family members were followed by unknown men. He claims that his phone calls, messages and daily movement were tracked. Police arrested him from his home at Thencho in Lalitpur on July 29. The police did so without an arrest warrant. Basnet claims some senior local leaders of the ruling party were behind his arrest. The police then forwarded his case to the Press Council.

Below is a condensed version of the report that landed Basnet behind bars.

Jit Bahadur Shrestha and his brother Laxmi Bahadur Shrestha, the owner of the Harisiddhi Bricks and Tiles Industry, a public limited company registered with the Nepal Stock Exchange, were pulling all the strings to sell land against the laws and consent of shareholders. The locals who had initially given the land to set up the factory in 1969 AD were also against the move.

Harisiddhi Brick and Tiles Industry was originally a government-owned entity built with a Chinese grant. Like many other ailing industries, it was privatized by former Finance Minister Mahesh Acharya on 30th October 1992. In the process of privatization, it was agreed between the government, new owner and locals that the property wouldn't be sold for private use.

Several shareholders of the company had long been protesting against the company management trying to sell the property by keeping them in dark. The company has around 70,000 shareholders who have been pressing the management to reimburse their damages. The shareholders have registered an application at the Lalitpur land registration office asking it not to authorize the selling of land.

Aiding them in this unlawful pursuit were politicians of the ruling Communist Party of Nepal. Pampha Bhusal, an MP elected from Lalitpur, the patron of a committee formed to mount pressure on the authorities to sell the land, something Bhusal denies.

The Shrestha brothers, who are key members of NB Group, a local business conglomerate, are familiar names in the stock market and hold a huge quantity of stocks of multiple companies including NCC bank, Nepal Bangladesh Bank and the ailing National Hydropower Company limited. During the three tiers of elections held last year, the duo had donated "considerable amount" of money in funding election campaigns of leaders from across the party line including Bhusal, according to a leader with knowledge on the matter.

Quoting at least one official and few other anonymous sources, the report among other things alleged that  State 3 MP Raj Kaji Maharjan, Rajesh Maharjan, ward chair, Ram Sharan Sharma Ghimire, a NCP leader from Lalitpur, and Shushil Khanal, a legal aide to lawmaker Bhusal,  exerted pressure on land revenue staffs to clear legal hurdles to sell the land. Khanal, the report alleged, had even threatened land revenue staff members and their family members to relent to their demand, a claim that couldn’t be independently verified.

On September 10, Khojtalas online again ran another story that was originally published in Dristi, a weekly tabloid considered close to the ruling party. Drishti's story had basically repackaged the same story that Khojtalas had exposed in numerous articles published earlier.

Police rounded up Raju Basnet from his home just two hours after the story was published, citing an order from the Lalitpur district court which, responding to a defamation complaint filed by Shushil Khanal [Pampha Bhusal’s legal aid], had asked the law enforcing agency to keep him in prison for four days. Basnet, who was still recovering from the last stage of jaundice, was denied a request to see his regular doctor, he told the Record in a recent interview.

Unlike during his first arrest, police did not think it necessary to inform the Press Council about the arrest. Basnet, who was released on a bail in the fifth day, said that he was treated like a criminal during his time in prison.

“I was kept handcuffed most of the time. I felt really bad about it. I have no other complaints,” said Basnet. On the other hand, Sambhu Shrestha, the editor of Dristi, was only summoned at police station several days later.

The same day that Shambu Shrestha came to the police station, SSP Rabindra Dhanuk, chief of Lalitpur Metropolitan Police circle where Basnet was kept, had thrown a momo party for Sambhu Shrestha and few other journalists including Press Council Chairman Kishore Shrestha who had accompanied Shrestha  to the police station to give details on the published report.

Ever since the communist alliance became the overwhelming majority in government, journalists have become targets of the state machinery at an alarming frequency. In recent months, the Prime Minister’s Office itself has become proactive in muzzling the free press by enticement or intimidation. Several journalists have been summoned at Prime Minister’s Office because of stories that portrayed government in poor lights, according to at least five journalists with insights on this subject. Prime Minister KP Oli has also held several meetings with editors of daily newspapers to chastise them for their critical coverage of the government.

A naked display of government power was seen when communications minister Gokul Prasad Baskota gave direct orders to stop "Sidha Prashna," a live program that had been running for 12 years on the state-owned Nepal television channel after the host Raju Thapa asked the minister if he had taken gold as dowry during a live interview.

Furthermore, loopholes in the newly introduced cyber laws were misused to intimidate journalists critical of those in power. The cyber laws or the Electronic Transaction Act, which was forced to protect users online, together with some ambiguous provisions in the civil code have made journalists very easy targets for arrests.

Though some controversial provisions are in process of being amended, the newly enacted civil and criminal code includes provisions which criminalize recording and listening to conversations between two or more people without the consent of the persons involved, disclosing private information without permission, including private information on public figures. The law even bars photographers from taking pictures in public without permission or making anyone subject to satire in a way that "hurts an individual," a provision that bears resemblance to a Saudi law which criminalizes satire.

There have also been instances when the press council, the body formed to protect and promote rights of journalists, was used to muzzle the press.

On August 17, the Press Council had summoned Gunaraj Luitel, the editor-in-chief of Nagarik daily and Akhanda Bhandari editor of Annapurna post. They were grilled by council officials and cadres of various parties, apparently the plaintiff in the cases on news that were published months before the editors were brought to the press council.

On May 23 Nagarik news had misprinted the name of State 5 Minister as Ishwor Pokhrael instead of Shankar Pokhrael. Luitel said that he was verbally summoned by the Council without any prior information for why he was called. Whereas Bhandari who received his summation in writing, said that there was no mention of why he was called. According to the press release made by the Press Council two days after the editors were summoned, Bhandari was called for a news that was published on March 23. 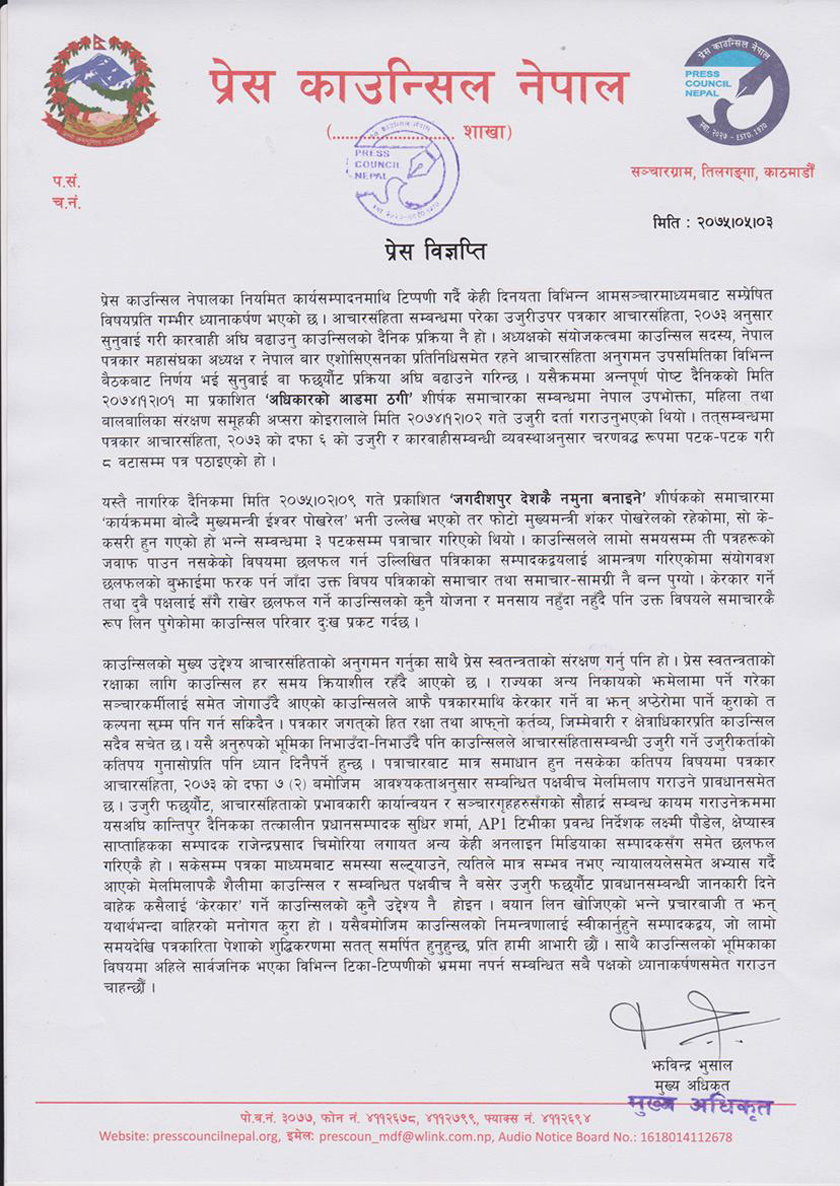 The council has no history of bringing both sides together to hold hearings on complaints registered with it against any media house, Republica daily reported in the backdrop of the summoning.

In May another incident had also occurred that called  the integrity of the Press Council into  question. Television journalist Rabi Lamichhane accused the press council chair Kishore Shrestha of influencing the Ministry of Home Affairs and the departments concerned to deny him visas with intention of deporting him back to the United States. Lamichhane, who recently gave up his US citizenship, said that his application to renew work permit was kept in pending without his knowledge as per Kishore Shrestha’s order.

Raju Basnet’s arrest was just the tip of an iceberg. When the government comes after the media, journalists like Basnet, who are  from smaller and more independent media bear the brunt. While some journalists have been forced to completely give up the profession, many others are left with little option than to surrender themselves to power.

But Basnet said he is not giving up as long as he is alive.

“In a way, those four days inside the bar helped me come out stronger. I will never stop speaking truth to power. If we submit ourselves to power, what will younger generation of journalists learn?”