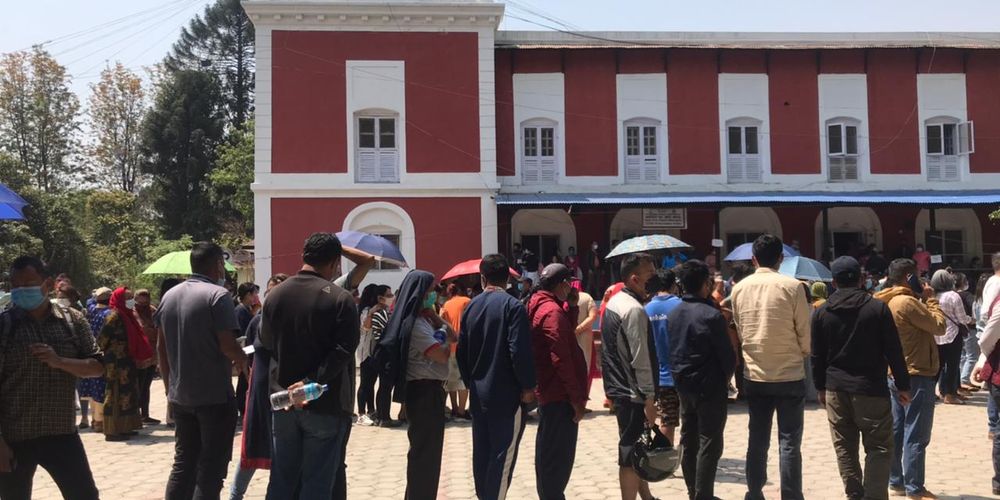 Nepalis line up to get the Verocell vaccine on April 26 at Nepal Police hospital. (Ishita Shahi)

Days before a 15-day lockdown was enforced in the Kathmandu Valley, vaccination centers were overwhelmed with hundreds of citizens seeking to get inoculated. Although the vaccine rollout was grossly mismanaged, with no appointments or tokens provided and no social distancing, Nepalis seeking the vaccine lined up regardless, prompted both by the chaos in India and the looming lockdown.

With the lockdown now in place, the vaccination drive has been temporarily halted. But daily cases of Covid-19 continue to rise, with Nepal reporting a massive 7,388  new cases on Monday, May 3, an alarming new high. Most public health experts believe that the coronavirus has now lodged itself firmly in the community and it will be difficult to halt its spread conclusively, despite lockdowns in over a dozen districts across the country. The prohibitions on public movement will provide a window of opportunity to shore up the health system to prepare for the fallout that is to come. Mass vaccinations are now among the few remaining solutions that can help prevent the pandemic from escalating.

But there is little information forthcoming from the government with regard to vaccinations. According to the Health Ministry, as of April 28, 2,091,511 individuals had received the first dose of either the Covishield or Verocell vaccine while 362,001 had also received the second dose of the Covishield vaccine. Second doses of the Verocell vaccine have not been distributed yet. If we are to assume that those who received the second dose are not also counted in the single-dose enumeration, this adds up to a total of 2,453,512 vaccine doses given out. 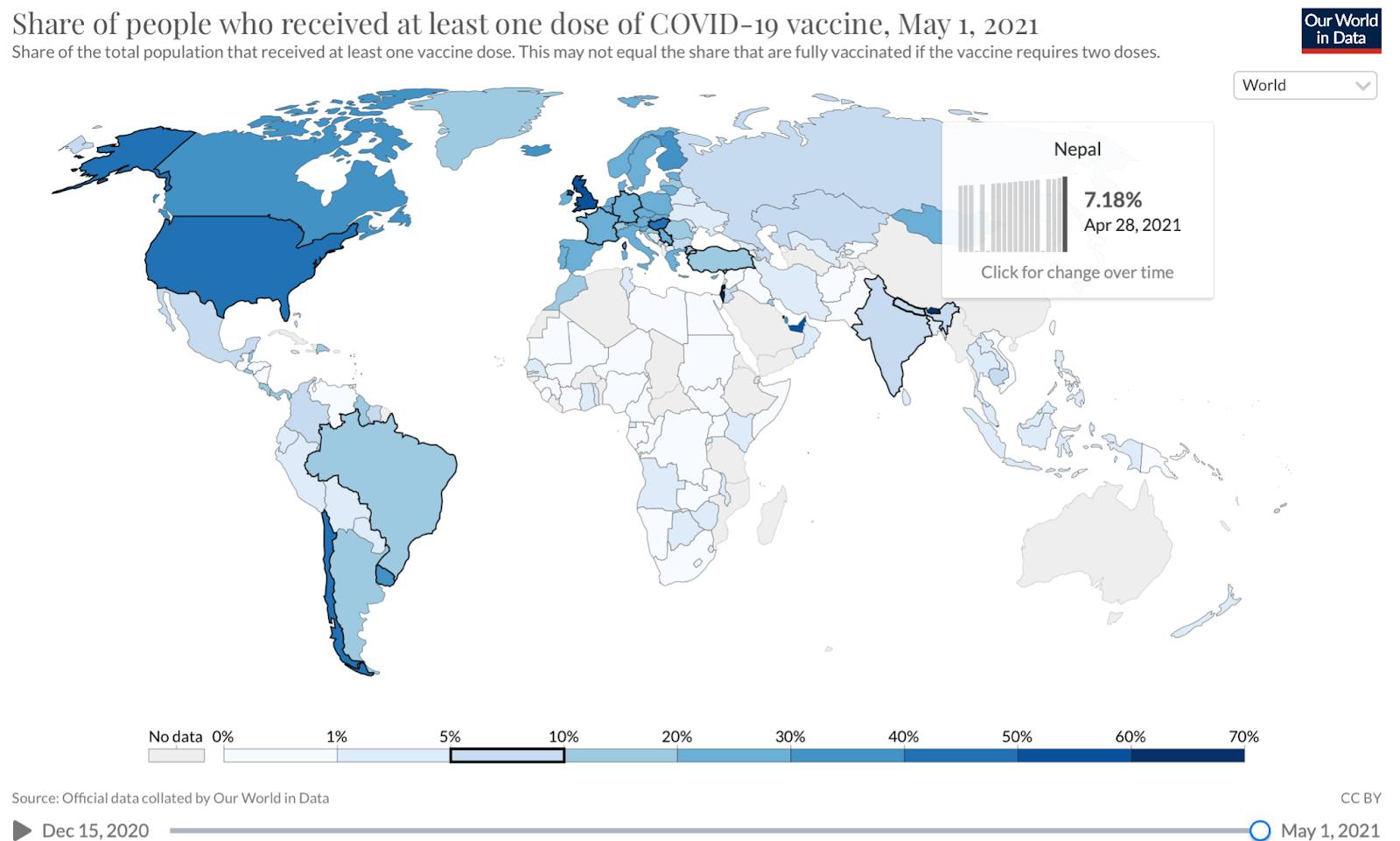 Ministry officials were unable to confirm to The Record the exact number of vaccines currently available.

But if over half a million doses remain in stock, Nepal should continue vaccinations without waiting any longer, say public health officials. Once more vaccines are obtained, they can be used to supplement the current vaccination drive.

“The government will most likely begin providing second doses of the Chinese Verocell vaccine during the lockdown itself,” said Dr Jageshwar Gautam, spokesperson of the Health Ministry.

Dr Gautam, however, was unable to provide details on how individuals would be able to travel to vaccination centers to receive their second doses when there are lockdowns in force, simply saying that vaccination cards would suffice.

There was also no information forthcoming on how the authorities would better manage queues and ensure social distancing so that vaccination centers themselves don’t spread the virus further.

According to Gautam, the federal government is currently looking to import more vaccines from countries like the United States, India, China and Russia, although nothing has been formalized yet.

“Because of the high demand from around the globe, there is a shortage but we are trying to get vaccines from as many other countries as possible, including the Sputnik V from Russia,” he said.

Nepal’s Department of Drug Administration most recently provided emergency authorization to the Russian Sputnik V vaccine, which boasts an impressive 91 percent efficacy, compared to Covishield’s 70 percent and Verocell’s 79 percent. However, countries like Slovakia and Brazil have expressed concern about Sputnik V. Brazil’s drug regulators recently refused to approve the vaccine “citing a lack of information guaranteeing its safety, quality and effectiveness”, according to Reuters.

“We will keep four concerns in mind — emergency use of the vaccine, number of doses provided, storage capacity, and the cost,” said Dr Gautam.

As early as September 2020, news had emerged of Trinity Pharmaceuticals inking a deal with the Russian Direct Investment Fund to import 25 million doses of Sputnik V. The deal never materialized. According to the Kathmandu Post, a Russian team is currently in Kathmandu to hold talks with the Health Ministry over importing the vaccine. Health Minister Hridayesh Tripathi has reportedly said that talks are ongoing to import 8 million Sputnik doses. These doses, however, can only be used to vaccinate new people, as mixing and matching vaccines are not recommended.

Nepal is also hoping that countries like the US, along with the global vaccine-sharing COVAX program, will come through with more doses. After being internationally censured for hoarding vaccines, the White House has pledged to release at least 10 million vaccines “soon”. COVAX is likely to take longer, as just 1.3 million doses are likely to be released to 92 low income countries by the end of 2021.

The federal government has also mobilized the Foreign Ministry to negotiate diplomatically for more vaccines but it is unlikely that a new shipment will be arriving anytime soon. Nepal has only vaccinated around 7 percent of the population, that too with mostly first doses. In order to achieve herd immunity and effectively halt the spread of the virus, 19 million more Nepalis will need to be vaccinated.

Public health experts say that vaccines are the need of the hour but as they’re not available at the moment, other precautionary measures will have to be taken.

“Since the efficacy rate of the Russian Sputnik V looks good, it should be good to use. But I haven’t gone through the report and I do not think I am the person who should be recommending the vaccine,” said Dr Anup Subedee, an infectious disease specialist. “Community-based interventions such as distancing, masking up, and following all safety protocols are equally important.”

“At this time, yes, vaccines are the first priority and if one gets the chance to get vaccinated, they should, as it is very important,” said Dr Pun. “If not, following the safety protocols is a must.”