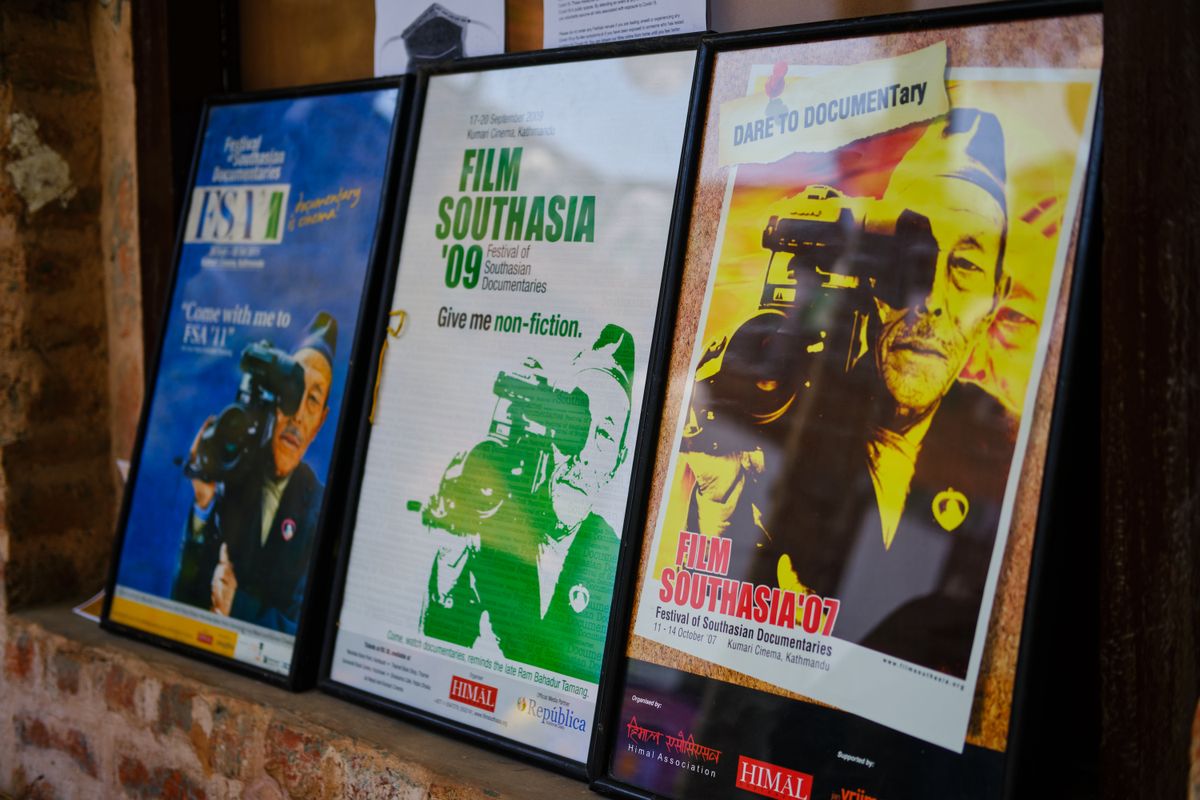 This year’s four-day festival, from April 21 to April 24, was held at venues within Patan’s Yala Maya Kendra as well as the Patan School Auditorium, featuring a total of 71 films, along with art installations and six panels with filmmakers, writers, critics, activists, and more. (Sajeet M Rajbhandari)

On Thursday, April 21, journalist Kanak Mani Dixit kicked off the silver jubilee iteration of Film South Asia (FSA) at the Kamal Mani Theatre, inside the premises of Rato Bangala School in Patan. While the opening audience waited for the premier film, Shut up Sona, to start, Dixit, who is FSA chair, pointed to a South-face-up map of South Asia projected behind him.

“This is the Right-Side-Up map of South Asia,” Dixit said.

The map has long been a favorite of Dixit’s, who uses it to prod people into rethinking what South Asian regionaism means and how South Asians must carve out their own trajectory in the world. Film South Asia, alongside that map and the magazine Himal Southasian, represents that very ideal of regionalism with Kathmandu as its center.

This year’s four-day festival, from April 21 to April 24,  was held at venues within Patan’s Yala Maya Kendra as well as the Patan School Auditorium, featuring a total of 71 films, along with art installations and six panels with filmmakers, writers, critics, activists, and more.

FSA 2022 was the 13th edition of the film festival but it was born 25 years ago, in 1997. Behind the festival were journalists and editors Dixit, Mohan Mainali, Beena Sarwar, and Mitu Verma.

“We were all working as journalists for Himal back then when Kanak first brought up the idea for a film festival,” said Verma.

This team of journalists felt that some stories needed to be told differently, through a medium that was more than just words, according to Verma.

“We wanted to show stories through an audio-visual medium, but back then there was no platform for independent South Asian documentaries,” she said.

The 90s were a fractious time for South Asia. Economies were growing and the middle-class was expanding but civil strife and conflict remained. Tensions between India and Pakistan were rising while civil wars in Nepal and Sri Lanka continued to ravage the countryside. Repression and censorship were rife across the region.

“People like Anand Patwardhan would have to go to court every time he came out with a new film,” said Verma.

Patwardhan, who is known for his socio-political documentaries, has on many occasions had to struggle to even get his film to be screened. His 2002 film, War and Peace, was shelved for nearly two years while Patwardhan challenged the Indian government’s censorship board on 21 different counts. Unable to showcase their films in their home countries, filmmakers like Patwardhan were looking for a space that would allow them to screen their films free of censorship.

FSA was thus conceived of as exactly that kind of space, where stories could be shared and studied without fear or limitations.

“A place for free independent journalism that doesn’t have borders in its mind, ” said Verma.

Over the last 25 years, South Asia has seen a lot and changed a lot, and with it so has Film South Asia. Verma even admits that the first iteration of the festival in 1997 was simply the team bringing in a hodgepodge of filmmakers from their respective nations and assembling them and their stories in Kathmandu.

Today, the festival has grown both in scale and ambition. Alok Adhikari, assistant director for this year’s FSA, shared that the team received over 3,000 submissions this year, of which 71 were selected and screened.

Adhikari has been watching films at the festival ever since he was five years old.

“I remember going to Kumari hall and going from hall to hall, watching the different films that were being screened. It certainly feels different to be part of it as an organizer now,” he said. “FSA has evolved, in the sense that the art of filmmaking has evolved itself. Who can make films, how they make films, and how much money they need have all changed.”

This year, FSA went beyond simply screening films. The festival included an art exhibition that worked in tandem with the films as well as panels that aimed to spark deeper conversations around the themes that the films presented. Talk panels dived into themes of gender, sexual violence, caste, and their intersectionality. Additionally six films were produced specifically for the festival though a fellowship programme initiated back in 2019.

“Films are works that you can come, watch, and go away, but with art installations, we wanted viewers to have a space where they had to actively interact to learn more,” said Laxmi Murthy, who curated FSA’s art installations. “Past festivals taught us that FSA was not just a place to watch films. We realized that people also look at it as a space where they can talk to and hear each other. Naturally, one wants to push the envelope to create collaborations and conversations, and maybe encourage other creative outputs.”

The festival will soon continue to expand as Travelling Film South Asia, taking the films to locations outside of the valley and Nepal.

“We — as South Asians — worry that our safe space may no longer be safe anymore.  This is why it is so important for FSA to continue to exist,” said Verma. “Nepal is still relatively freer, and the fact that we can tell our stories freely here is a big deal for us.”