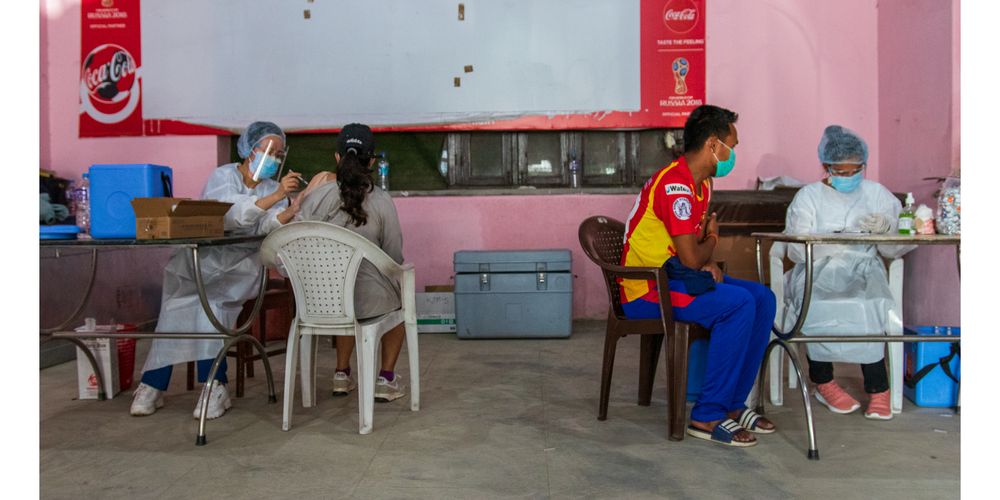 After the disastrous rollout of the first dose of the Chinese Verocell vaccine last month, the Health Ministry has restarted vaccinations, this time with proper social distancing measures, masks, and sanitizers.

On Sunday, May 16, the districts of Kathmandu and Bhaktapur started providing second doses of the Verocell vaccine to those who had received the first dose within the past 30 days. Although there is a strict lockdown in place in the Kathmandu Valley, individuals with vaccination cards on their way to get the second dose will be allowed to travel, according to the Health Ministry. 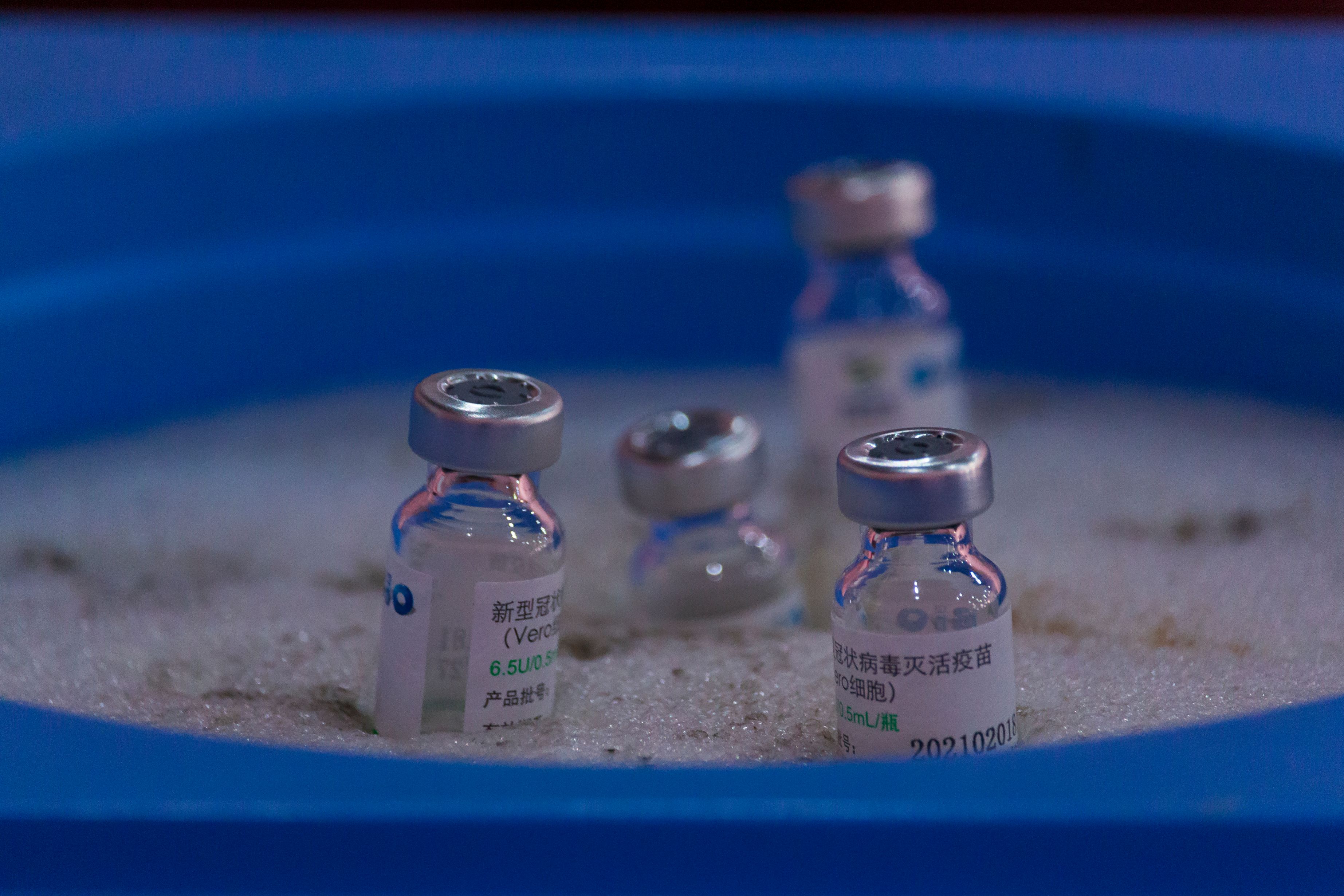 Both districts have issued official schedules of the vaccination drive, segregating people by the date they had received their first doses. On Sunday, those who got their first jabs between April 7 and 10 (Chaitra 25-28) were eligible for the second dose in Kathmandu and parts of Bhaktapur. Similarly, those who received the first dose between April 11 and 12 (Chaitra 29-30) are eligible for the second dose on Monday, May 17.

The vaccination drive is expected to go in these two districts until May 25.

Contrary to the notice issued, officials at Bhaktapur’s Public Health Office told The Record that anyone who had received the vaccine within the past 30 days could come in on any date to get the second dose.

“There aren’t specific dates allocated for the vaccine; rather, people who have received the first dose of Verocell before 30 days are eligible and are encouraged to visit nearby centers to get the second dose,” said Krishna Bahadur Mijar, senior public health officer at the Bhaktapur District Public Health Office.

Mijar said that the public health office was expecting around 200 people at each center, where proper social distancing along with mandatory masks would be ensured.

In Kathmandu Metropolitan City, 32 locations have been identified to give out the vaccine while other municipalities, like Tokha, Budhanilkantha, Kirtipur, Nagarjun, etc, have their own designated locations.

“The first day went well. All 32 centers followed social distancing rules. Many of the centers were in open spaces. People were given coupons and sent inside the centers in groups of 10,” said Ishwor Man Dangol, spokesperson of Kathmandu Metropolitan City. “There was some confusion at some centers because some people came to get their first shots and some people got their dates wrong. Hopefully, things will be smoother from tomorrow.”

Unlike the vaccination drive in late April, where only a handful of vaccination centers were identified and information was scarce, the Valley’s three districts have designated a wide range of vaccination centers and are going public on social media with their schedules. The federal Health Ministry has also mandated that a proper queuing system be put in place, social distancing in queues be ensured, and that everyone wear masks.

In Kathmandu, the first day of the vaccination drive went relatively well, as many centers handed out coupons and conducted a roll call, eliminating the need to stand for hours in line in close quarters with others. Vaccination centers in crowded areas like Kathmandu city’s Ward No. 3 reported a crowd of around 300 people, all of whom were duly handed coupons. The vaccination drive ended officially at 4pm but many centers had closed down at around 3 due to a lack of people.

Of the Kathmandu Valley’s three districts, Lalitpur, however, will only be restarting its vaccination drive on Thursday, May 20, for those who got their first jabs between April 7 and 10. Those eligible will be able to receive their second doses at locations designated by the various ward offices, according to a circular released by the Lalitpur Metropolitan City office.

“Keeping in mind how chaotic the first vaccination drive was, we have decided not to administer the second doses at hospitals. The doses will be administered from ward offices or open spaces following social distancing measures,” said Raju Maharjan, spokesperson of Lalitpur Metropolitan City.

The vaccination spots will be decided by the ward offices and a list will be released later on social media, said Maharjan.

The ongoing vaccinations, however, are only for the second dose of the Verocell vaccine. According to the Ministry of Health and Population, around 289,000 people have received the first dose of this vaccine. Although the Health Ministry has launched an online registration form for those who wish to receive the first dose of a vaccine, which has yet to be decided, there is little clarity on when that particular vaccination drive will begin. Nepal currently does not have enough of any vaccines in stock to give out first doses. 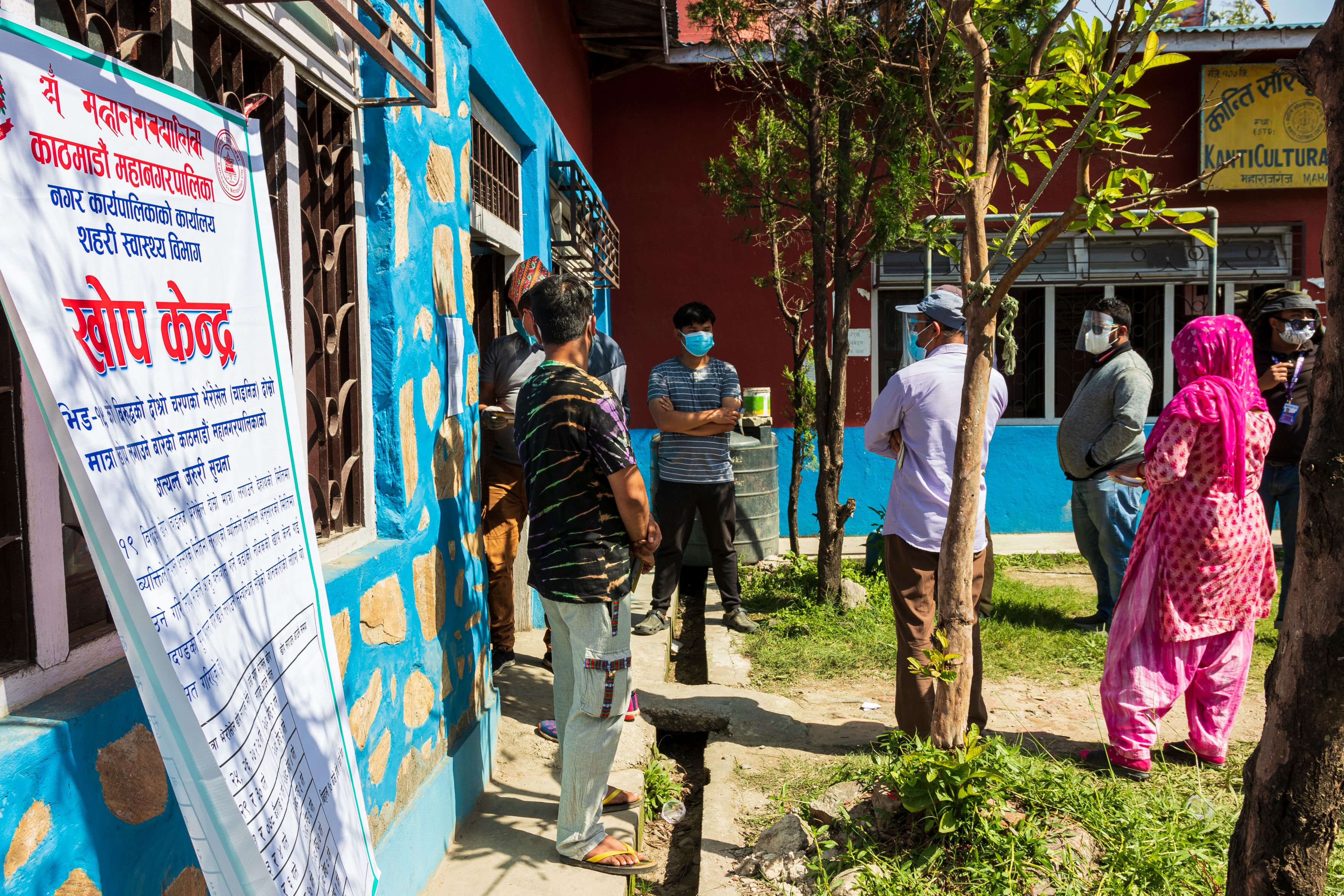 Nepal is in desperate need of vaccines and there are numerous campaigns underway to bring more to the country. While citizen groups have been lobbying foreign countries like the US, the UK, Canada, and Australia for vaccines, Nepal’s diplomatic apparatus is also reportedly doing its part but failing to make much headway. According to Republica, Nepali Ambassador to the United States Yubaraj Khatiwada is lobbying to bring 3 to 5 million doses of the AstraZeneca vaccine to Nepal. The report, however, does not directly quote Khatiwada and does not have a byline.

Public health experts say that vaccinations are of the utmost importance as lockdowns, like the one that is currently in place in a majority of districts, only slow the spread of the coronavirus and buy some time. Once the lockdown is lifted, there is a very real possibility that infection rates will rise again, unless people are vaccinated.

Although the resumption of vaccinations is a good thing, many, especially at-risk groups like the elderly, are still awaiting the second dose of the AstraZeneca Covishield vaccine. But according to AstraZeneca, the vaccine’s efficacy is 76 percent after just one dose, with 100 percent protection against severe hospitalization and death. There is no internationally vetted data on the efficacy of the Verocell vaccine after just one dose as trial data has not been released publically. Officials in China say that the vaccine has a 79 percent efficacy after two doses.

The Verocell vaccine has not been rolled out to a majority of districts outside the Kathmandu Valley, except for a few surrounding ones like Kavre, and there is no indication when the rest of the country will be vaccinated. So far, the only people who’ve been fully vaccinated are frontline health workers and those working in health care centers, bureaucrats and government officials including Members of Parliament, some diplomats and international aid agency workers, and journalists.