The second wave is here and unless the government acts soon, Nepal will be in the midst of a public health disaster 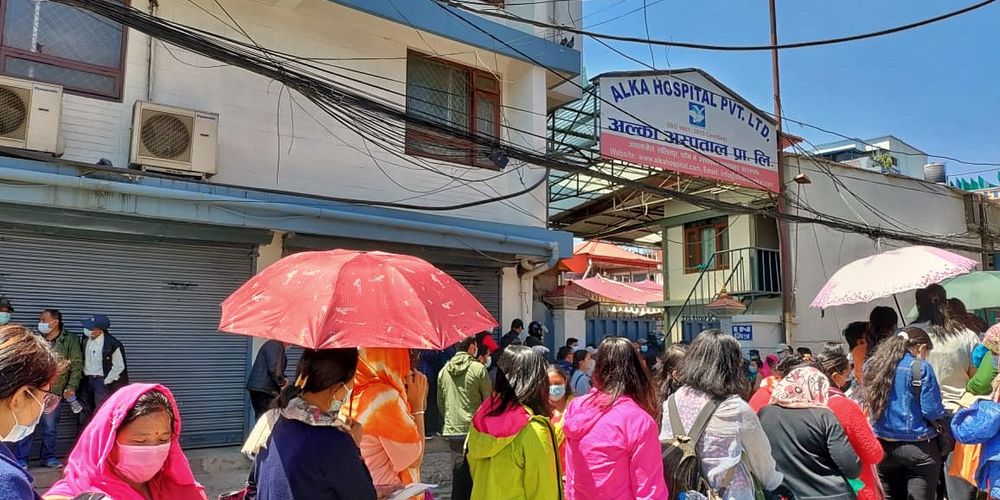 There was pandemonium outside the Alka Hospital in Ekantakuna on Thursday morning. Hundreds of people had gathered to receive the Chinese Covid-19 vaccine on what was said to be the last day for the first dose of the vaccine for individuals between 18 and 59. After queuing for hours since the early morning, at around 1.30 pm, half of those gathered were told to go home as the hospital didn’t have adequate vaccines for everyone.

“It is not up to us. WHO staff are administering the vaccine,” said an Alka Hospital staff member who was wandering outside the hospital premises.

Dozens of irate men complained of already having lost one work day in order to get vaccinated and how they wouldn’t be able to take another day off. Many in the crowd were visibly anxious, talking about the situation in India and how it was only a matter of time before Nepal went the same way.

Covid-19 cases are rising at an exponential rate in India. With over 300,000 new cases in the last 24 hours, India’s healthcare system has all but collapsed. Dire scenes emerging from across the country show people dying on the streets and ghats littered with burning bodies. “The system has collapsed” read a headline in The Guardian newspaper. As hospitals reel under oxygen shortages and a lack of critical care beds, over 2,100 people have died in 24 hours, the highest death toll yet in India.

With nearly 2,400 new cases in the last 24 hours — half of them in the Kathmandu Valley alone — Nepalis are increasingly afraid that it is only a matter of time before the scenes from India become a reality at home. It is partly this fear that is driving Nepalis to seek vaccinations in droves, only to be confronted with massive crowds, no social distancing, and extremely poor management, as the scene at Alka on Thursday exemplified.

The Health Ministry has issued conflicting statements regarding the availability of the vaccine, leaving the public confused. Initially, it said that office workers and students going to China for their studies would be able to receive the Chinese Verocell vaccine at selected hospitals across the Kathmandu Valley. Later, unannounced, hospitals began to vaccinate anyone over the age of 18 and under 59, all on an ad-hoc basis. Even now, while many hospitals say Thursday is the last day for the vaccine, the Armed Police Force Hospital, the People’s Dental Clinic, and the Chhetrapati Free Clinic are reportedly still conducting vaccinations.

As some Nepalis scramble to obtain vaccines, others have been going about life as usual with few social distancing measures. Events with large crowds, both political and otherwise, continue to take place, even though the government has directed that gatherings not exceed more than 25 people. But with government officials themselves not respecting regulations, more obsessed with political maneuverings, the people seem to be following suit. Even the mainstream media is largely ignoring the looming health crisis, with most front pages still dedicated to the back-and-forth between aging politicians.

“Leadership across the country did not adequately convey that this was an epidemic which had not gone away,” K Srinath Reddy, president of the Public Health Foundation of India, told The Guardian. “Victory was declared prematurely and that ebullient mood was communicated across the country, especially by politicians who wanted to get the economy going and wanted to get back to campaigning. And that gave the virus the chance to rise again.”

Reddy’s statements could very well have referred to the attitude of Nepal’s leadership, where Prime Minister KP Sharma Oli, on Wednesday, inaugurated statues of Ram, Sita, Laxman, and Hanuman at Ayodhyapuri in Chitwan amidst a crowd of thousands. Even as Oli disregarded his own government’s directive to not hold events with crowds larger than 25 people, Tourism Minister Bhanubhakta Dhakal said in an interview with Kantipur TV that government officials would only follow the directive after it was published in the Nepal Gazette.

Nepal’s leadership appears to be in denial, with the prime minister still spreading misinformation regarding cures for the coronavirus. But the numbers are alarming and they speak for themselves.

The Health Ministry had earlier projected that the second wave would peak in Nepal in mid-July, reaching 11,000 daily cases. Unofficial projections by Dorje Gurung, an educator, based on current trends, present a much more alarming picture, with daily cases likely to reach 11,000 in May.

The situation is quickly becoming dire but the federal government has taken no decisive decisions, preferring to while away this crucial time before the second wave breaches the banks and overwhelms the country’s fragile health system.

Dr Jageshwar Gautam, spokesperson for the Health Ministry, said that the federal government had no immediate plans to institute any severe restrictions, including a lockdown, leaving things up to local governments.

“The imposition of lockdown depends on the decision of each district’s respective administrative body. Nepalgunj metropolitan city, for instance, has already imposed a lockdown. We do not have any plans for a lockdown in Kathmandu,” Dr Gautam told the Record. “But if necessary, the city will take a decision.”

Such measures, while necessary, will not be adequate, say public health experts. With hundreds of thousands of cases in India, the government will need to take stringent measures, including a partial lockdown, if it is to prevent a public health disaster. The open border with India has yet to be sealed and Indians are increasingly using Tribhuvan International Airport to fly to third countries as Saudi Arabia, Hong Kong and Singapore have all banned incoming flights from India.

“A lockdown can help curb the transmission of infection as it imposes movement restrictions. But it is the last resort, meaning it should only be implemented when other measures fail,” said Dr Anup Subedee, an infectious disease specialist. “Even if the government imposes a lockdown, it should focus on the effect the lockdown will have on vulnerable groups. If imposed, the lockdown should be data-driven and limited to a certain time and certain areas.”

But the government appears to have learned little from last year’s experience, as no measures have been instituted so far, beyond limiting large-scale gatherings and closing down schools.

“The government has been very selective about implementing suggestions provided by experts as per lessons learned from the first wave of the pandemic,” said Dr Subedee. “Again, adequate testing, contact tracing, quarantine facilities, isolation facilities, including Intensive Care Units, properly trained human resources in the medical sector have not been taken care of. Even though a budget for an oxygen plant has been allocated, it still isn’t ready.”

Oxygen supply has emerged as a major concern in India as dozens have died due to a lack of oxygen. Social media has been replete with pleas for oxygen canisters and ICU beds as hospitals across the country have collapsed from the load.

In Nepal, only 26 out of 185 hospitals have oxygen plants and even then, not all of them are functional, reported The Kathmandu Post. Government hospitals across the country have a total of 1,185 ICU beds and 512 ventilators, according to the Health Ministry. Should the number of daily cases and critical patients rise, this number will not be near adequate.

In short, the situation looks grim.

“The second wave is here,” said Dr Subedee, “and once again, we are not prepared.”

The profession of psychologists has a direct relation to the mental health of people and thus must warrant high quality practitioners with proper accreditations who are governed by proper legislation.

In the midst of the current pandemic, people living with chronic, or noncommunicable, diseases are suffering doubly — because of the virus and a poor healthcare system.