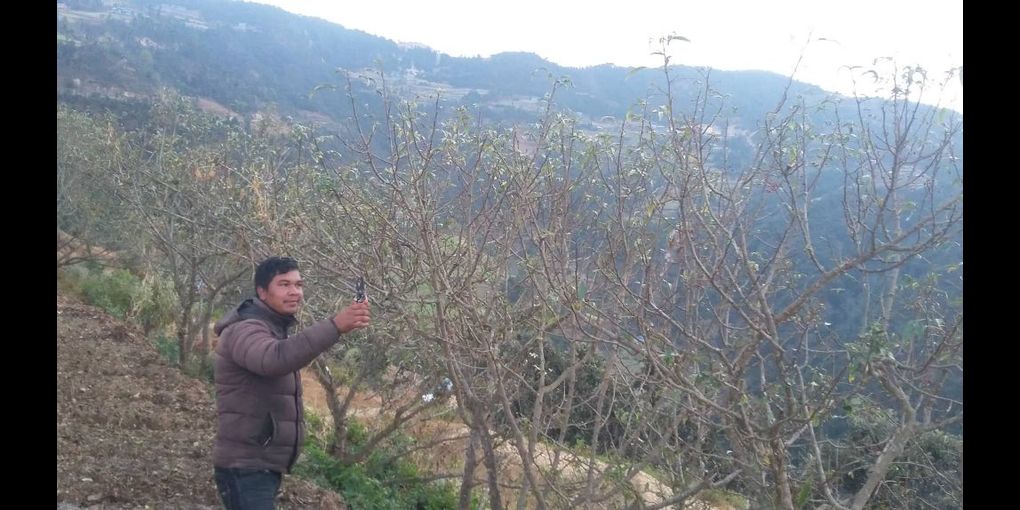 Until a decade and a half ago, in rural Salyan, the family of Tej Bahadur Yogi were fully reliant on growing traditional crops. All the locals of Guranse Taakuri, in Chhatreshwori Rural Municipality, would grow maize, barley, and wheat on their farms, which were largely rainfed.

Because they were smallholder farmers, their earnings from farming were not enough to depend on completely, so most locals, including Yogi’s family members, used to work six months a year in India as manual labourers; during the other months--especially around farming and harvesting time--they would be back in their village, farming their traditional crops.

Back then, they were not even thinking about growing alternatives to traditional crops. But over the recent decades, they were forced to rethink farming practices because they were faced with depleting harvests. Owing to water scarcity, their traditional crops stopped providing the yield of earlier years. The water sources in the area started to dry up, snowfall was not as frequent, and the rains became unpredictable. With their farms’ productivity starting to dip, for many locals, supplementing their income by working as manual labourers in Indian cities was no longer enough to take care of their families.

Running out of options, the old generation of farmers tried to diversify into apple farming. But that idea provided no payoff to residents of the beautiful village of Guranse Taakuri, which was named after the famous rhododendron flower.

Climate change was starting to severely impact the people’s livelihoods. For one, owing to global warming, the rainfall patterns were becoming increasingly erratic: the rains never came on time, and when they did the rainfall was either too much or too little. Things became so bad that locals could not even source drinking water easily. They were not able to provide water to their cattle, and because they didn’t have irrigation to fall back on, their crops began to routinely dry up.

Worried by these extreme climatic events, a group of farmers led by Yogi approached the Salyan District Agriculture Office (now renamed the Agricultural Knowledge Center), seeking alternatives--that is, if the government had any. The office recommended that they attend a few training sessions organised by the government in centres nearby and in Kathmandu.

That’s how Yogi ended up attending training programmes in Kirtipur and Kohalpur. After gaining some technical knowledge about setting up and caring for nurseries and learning about the possibilities promised by agroforestry farming, instead of continuing to depend on failing traditional crops, he started growing timur (Zanthoxylum armatum) saplings.

The timur plant is classified as a ‘non-timber forest product'. This small bush tree, of maximum three metres height, commonly grows in Nepal’s mountain forests, and people have, for ages, been harvesting its peppercorns, usually from wildly growing plants. But with demand for timur peppers increasing in Nepal, people began shifting from collecting wild berries to growing the plants in fields and agroforests.

Today, Yogi, has allocated a total of 10 ropanis of land to growing timur saplings.

“These days, I produce about two and half quintals of timur from 250 trees each year,” says Yogi. “Apart from timur, I’m growing kiwi and lemon saplings for other locals interested in ago-forestry farming.”

Every year, Yogi grows over 100,000 saplings of cash crops like timur, kiwi, lemon, and persimmon. A timur sapling without a poly bag fetches him NRs 40, while a sapling with a poly bag goes for NRs 70.

Once a manual labourer, Yogi has now become a rich farmer. On average, he sells at least NRs 5 million worth of produce annually. Following his lead, other farmers in his village, who were initially wary of switching from farming traditional crops, are now growing similar climate-resilient crops too.

A few of them are earning even more than Yogi. Some households who have planted timur in large plots produce five to six quintals of berries every year. Sundip Basnet of Chhatreshwori, one of those converts, sells timur worth NRs 325,000 annually. Basnet and his family start harvesting timur from mid-September and continue that work till mid-December. 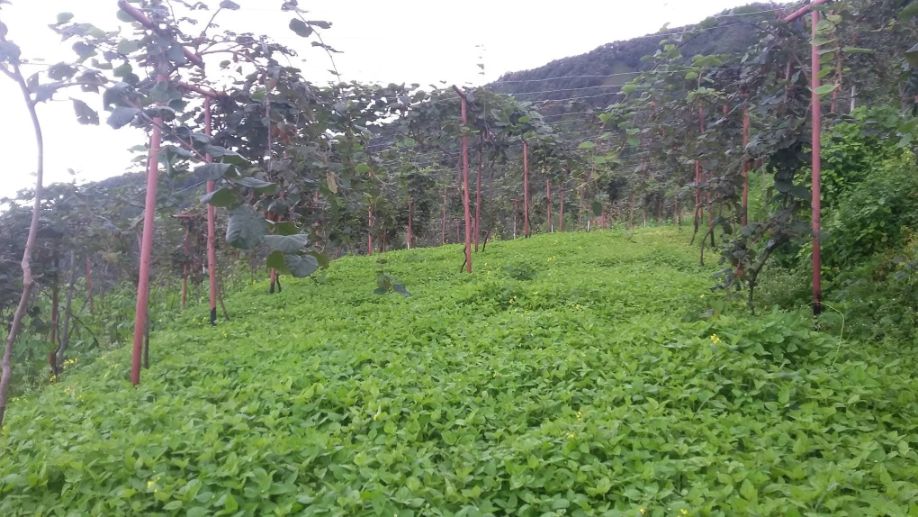 Since the farmers don’t own the machinery needed for drying the berries, they usually stick to traditional methods. The berries are dried in the shadow of trees or under the awnings of their houses. “It would be great if we had new harvesting machines and solar technology to dry the berries,” says Basnet.

Impressed by the market potential for timur and other climate-resilient cash crops, all 900 households farmers from the village are today growing timur not just in their farms, but also on previously fallow land and patches of private forests. Farmers of every ethnicity-- Chhetris, Magars, and Yogis--have taken up timur farming. For many of them, the money from this crop makes for a disposable income that they wouldn’t have had before; earlier, during emergencies, they would have had to borrow money from local moneylenders.

Last year, about 250 quintals of timur were produced in Chhatreshwori. On average, locals from the rural municipality sell timur worth NRs 200 million each year.

They could generate more income if the taxes on their yield were reduced and if they did not have to deal with onerous bureaucratic red tape. As of now, a farmer needs to get registered in the Value Added Tax system before they can begin selling timur, and they also have to deal with the additional taxes slapped on exportable agro-foods. To circumvent these bureaucratic hurdles, the farmers directly sell their products to businesspersons or brokers.

At harvest time, middlemen start appearing in the villages. After procuring the berries, the middlemen then negotiate with buyers in Srinagar, Salyan, a local market, where they have established collection centres. From the stock in these centres, they sell some berries at Srinagar itself and transport the rest to Tulsipur, a regional city, from where they further ferry the goods to Nepalgunj, Dhangadhi, and Kathmandu. The berries that arrive in Kathmandu are usually exported to Thailand, India, China, and Singapore.

“For farmers like us, the transportation expenses and taxes are too steep, especially if we try to sell one or two quintals of timur to regional and central markets,” says Yogi. “The timur fetches almost double of what we get here when it reaches Kathmandu.”

Kathmandu and other large cities are the major points in the supply chain for getting timur to the world’s markets. According to a study conducted by the Ministry of Forest and Soil Conservation, in collaboration with the United Nations Development Program in Nepal, the zanthoxylum oil extracted from different regions in Nepal is transported to Kathmandu or Nepalgunj and sold to herbal companies, traders, and exporters. Some herbal companies produce various healthcare products that they sell in the domestic market. The traders sell the oil to essential-oil exporters, who are mostly based in Kathmandu.

“The oil is exported to India  and third countries. It is estimated that more than 90 percent of the products are exported, while only 10 percent is consumed domestically,” states the report, Value Chain Designing of Timur of Protected Panchase Forest Area.

Because timur has become a good source of income for farming families, all three levels of government--federal, provincial, and local--have prioritised timur farming. The Karnali Provincial government, which includes Salyan, has announced a Zanthoxylum Year Programme in the province’s hilly districts.

The federal government announced that it would celebrate fiscal year 2019-2020 as the year of timur plantation. Furthermore, various herb-based industries have been proposed for Salyan, Rukum (East), Rukum (West), and Jajarkot districts of Karnali Province. As for Guranse Taakuri, Yogi’s village, whose success story got the ball rolling, it has been declared a pocket area for zanthoxylum and a kiwi farming zone.

In Dang District, which borders Salyan, the Division Forest Office has started a campaign to plant timur and malagedi, another cash crop, in the hilly areas of Dang Valley. “The market demand and purchase price for timur are extremely high. By growing and selling it, farmers can make regular, decent income because it's a multi-year herb,” says Dipak Gyawali, chief of the Division Forest Office in Salyan. But in order for the farmers to make even more income off the plant, the government must take care of the bureaucratic hurdles.

Considering its high value and the role it can play in uplifting the economic status of farmers, the DFO has started to produce 100,000 timur saplings in three different forest nurseries in the district.

Gyawali says they also plan to plant 500,000 timur saplings in the district’s hilly areas in the near future. The saplings will be planted in national forests as well after enough saplings have been supplied to farmers.

In Nepal, seven different species of zanthoxylum grow easily between the altitudes of 900 metres to 2,500 metres. Research shows that timur farming is possible all the way from Jammu, in India, to Bhutan. Traditionally, the people of the Himalayan hills have used timur to produce an oil that is largely used to help ameliorate the pain of toothaches and other discomforts. In the FMCG sector, zanthoxylum is used in toothpastes, soap, shampoo, and perfumes.

But to enable the timur market to grow, the government must continue to think about farmers first. Farmers begin the timur value-chain process by planting either saplings or planting branches directly. Since only 10 percent of the seeds survive in nurseries, it can be a bit difficult to produce saplings. There are no projects in Nepal’s mountainous districts that produce saplings from seed. A timur plant yields fruits three to four years after it is planted and continues to bear fruit for close to 40 years. On average, a timur plant produces  a maximum of 500 kg of berries annually.

For the timur that is collected from national forests, a collector needs to pay NRs 8 per kg. People can also harvest timur from private forests, but there are differences in yield between timur that grows in the forest and those cultivated on a farm.

In Yogi’s village, timur farming has become an enterprise that is helping stem the migration of youths to India and the Gulf countries. These youths say they could see even bigger earnings if the government were to establish timur-based industries in Nepal’s villages, provide loans to promote the farming of other climate-resilient crops, and iron out the problems in the legal system.

The legal procedures are lengthy, complex, and involve much paperwork related to tax payments, harvesting permits, transport permits from the DFO, etc. It’s owing to these bureaucratic strictures that farmers like Yogi have no choice but to sell their timur to middlemen, instead of directly at the markets.

The growth of timur farming in Salyan and neighbouring districts represents but a small start. “There is no doubt that the income currently made by family forest owners can be multiplied and that timur farming can help fulfil the needs and demands of the whole nation,” says Yogi.

Kiwi fruit and the promise of economic revitalization

Subsistence farmers are the least likely to benefit from the boom of this cash-crop in mid-hill villages.