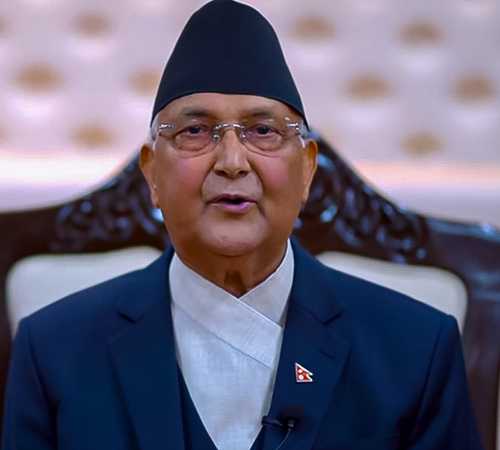 Every time he faces the nation, Prime Minister KP Sharma Oli likes to highlight a long list of works his government has accomplished on the diplomatic front. The prime minister wants the nation to believe that the last three years of his government were a golden era in terms of foreign policy--a period that among other things marked an end to the country’s dependence on India, with the signing of a historical trade and transit accord with China. Other often-cited diplomatic successes of the Oli administration include the historic two-day visit by Chinese President Xi Jinping, the Bimstec summit held in Kathmandu, and an agreement with India to build a railway connecting Kathmandu with Raxaul, in Bihar. Foreign Minister Pradeep Gyawali has gone a step further, claiming that Nepal, which was hitherto invisible in the international arena, has 'started being seen and heard'. And to hide  its shortcomings on the domestic front, senior government officials have often created hype around the government’s diplomatic finesse.

But all that hype seems to be waning, as suggested by recent developments, which are exposing fault lines in the government's ill-conceived foreign policy.

Two recent developments in particular require greater attention if one wants to know Nepal’s real stature in the international arena and how it is being treated in the neighbourhood and beyond.

The first has to do with the much-publicized visit to Nepal by India’s top spy.  During his short Nepal visit as an emissary of Indian Prime Minister Narendra Modi on October 21, Samant Kumar Goel, Director of India’s Research and Analysis Wing, held a one-on-one meeting with Oli. The far from clandestine visit has raised many eyebrows due to its optics, with foriegn policy pundits in Kathmandu wondering if India has once again handed over Nepal affairs to spies.

The second is US Foreign Secretary Mike Pompeo’s visit to India, Sri Lanka, and the Maldives last week. Nepal’s leaders and foreign policy pundits are especially baffled at the fact that Nepal, in the eyes of the world’s superpower, is not as important as the tiny island of Maldives.

It's no secret that Oli’s stance on the Constitution and his rhetoric against India in the aftermath of the 2015 India blockade not only turned him into a nationalist leader but also proved instrumental in his rise to power. During his first term in office, Oli further bolstered his image by signing a trade and transit treaty with China. His image as a staunch nationalist helped him return to power in 2018 after he steered a communist alliance to a historic win in the parliamentary elections.

Many had hoped that Oli would put the past behind him and work to mend ties with India while implementing the treaties signed with China.

Three years on, the agreement with China has seen hardly any progress on the ground, while relations with India are getting more complicated than ever.

Oli continued to fan anti-India sentiments after he started his second tenure as prime minister, in 2018, picking fights over small disputes that could have been tactfully resolved through negotiation. The already troubled relations hit a new low when Oli in June amended the Constitution to endorse a new map that incorporated territory also claimed by India, after the latter’s inauguration of a link road to Mansharovar through Kalapani.

Although the move gave Oli much-needed respite from the growing criticism over his handling of the Covid-19 pandemic, it has further complicated long-standing boundary disputes between the two countries.

Oli seems to have realized that the hasty move to amend the Constitution was a mistake. He has since been making efforts to appease India by halting the work on updating the new maps in school curricula, using old maps in the official letterhead, and remaining silent on matters concerning India. Sources say that he has also told his close aides not to make any controversial comments on boundary issues.

After snubbing Oli’s calls for months, the Indian establishment has signaled that it is willing to engage Oli, albeit at the bureaucratic level. Goel’s visit, as well as the upcoming visit of Indian Army Chief Manoj Mukund Naravane, have been seen as an effort in that direction. But it's gradually becoming apparent that Indian Prime Minister Narendra Narendra Modi, who has visited Nepal on four different occasions since the 2014 visit during his first tenure, appears to be in no mood to deal with Nepal on the political level, as used to be earlier.

It's not clear what prompted Goel's visit, but NCP insiders say that he came to Kathmandu at Oli's request. A leader close to Oli says that the prime minister has come to the conclusion that a sound relation with India is indispensable for the smooth functioning of his government and for him to remain in power until the next elections. Oli, according to the leader, also suspects India’s hand in deepening the gulf in the ruling party. Dissident factions in the ruling NCP have been trying to oust Oli amid his reluctance to let go the reins of either the party or the government.

During his first three years in office, Oli’s handling of relations with other countries has not been satisfactory either. He does deserve credit for signing trade and transit agreements with China in 2016 and following up on the details in his second tenure, a move that could sooner or later help landlocked Nepal have easy access to trade through the ocean. He is also right in his analysis about Nepal’s extreme dependence on India. But his assumption that China could be a substitute to India has proven wrong.

Despite Xi’s historic visit in 2019, Nepal has not been able to take much advantage of the new relations with China. Xi’s visit did not see any new economic package. Larger aspects of the agreement signed in 2016 and 2018 remain to be implemented. Oli’s promise of a railway connecting Lhasa with Kathmandu may still take a few decades to materialize, while his election promises of an economic miracle fueled by Chinese investment remain a distant reality. And despite the supposed warm ties, China has refused to open major trade border points that were shut down around nine months ago (ostensibly in response to the Covid-19 pandemic), which is causing billions in losses to traders.

For generations now, Nepal’s foreign policy has been more about theatrics, less about substance. Leaders have often exploited relations with neighbours as an easy way to bolster their nationlistic credentials. In recent decades, leaders have been deliberately fanning conspiracy theories and playing up unfounded fears surrounding powerful nations, while labeling their political rivals foreign agents--all to score political points at home.

For instance, holding a firm position against India over the issue of boundaries, in particular, has been shown to be an infallible mantra to instantaneously win the hearts of Nepalis.

Oli’s spectacular rise to the helm of Singha Durbar has further fueled this phenomena, so much so that now Oli, regardless of his willingness and his strength in parliament, has not been able to endorse the USD 500 million grant under the Millennium Challenge Corporation of the US government--owing to opposition in the ruling NCP.

While it's obviously good to have leaders who love the nation, the unwarranted fears and the tendency to treat with cynicism all matters pertaining to powerful countries have not only weakened the country’s credentials in the international arena, but also discouraged donors and affected the functioning of government. Moreover, it's a sad reality that most leaders who never tire of harping about nationalism are the ones who have done hardly anything to steer the country toward the path of prosperity and development, even as the state continues to depend on foreign aid.

Shallow fakes, where videos are edited to remove context and present statements in a different light, are just as dangerous as deep fakes.