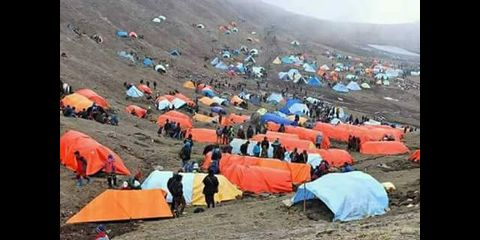 Over the last few months, the mountain peaks of Dolpa have been covered in snow. And patches of snow still dot the slopes of Dolpa’s hills, whose topsoil harbours the highly valued yarsagumba. Dolpalis consider snowfall auspicious because the caterpillar fungus grows fast and grows well when it snows. In the recent past, when the last patches of snow would start to melt, Dolpalis would head for the nearby hills and try their luck at harvesting yarsagumba.

But they won’t be able to do so this year because the Nepal Government has enforced a ban on yarsa harvesting. For over a month and a half, Dolpa (along with all of Nepal), has been under the lockdown implemented to contain coronavirus spread. For Dolpalis, Baisakh would usually mean a busy month of procuring the supplies necessary for harvesting yarsagumba. This year, for yarsa prospectors like Gore Rokaya, 69, of Durgaun in Thulibheri Municipality-6, Baisakh has meant a month spent housebound, clinging to a tenuous hope that the government will lift the ban on yarsagumba hunting. Last year, Rokaya picked close to 60 pieces of yarsagumba. Most years, a single piece fetches him roughly Rs 1,000. This year, he has no choice but to linger in his courtyard in front of his house and reminisce about better times.

The decision to ban yarsa harvesting for this season was taken during an April 25 meeting of the District Disaster Management Committee, chaired by Chief District Officer Suresh Sunar, at the District Administration Office. The committee decided to ban the collection of yarsagumba in Shey Phoksundo National Park, in its central areas, and within the areas under the Division Forest Office’s jurisdiction. During a typical harvest season, thousands of yarsa prospectors from across Nepal travel to Dolpa, so the committee decided that clamping a ban would help prevent people from crowding together and possibly infecting one another with the coronavirus.

Dolpali yarsagumba is considered the finest found in all of Nepal. Yarsagumba traders say that more than Rs 10 million worth of transactions take place in a single village of Dolpa during peak yarsagumba season. The “green gold”, which fetches about Rs 200 to Rs 300 per piece freshly harvested, can be sold for between Rs 500 to Rs 1,000 at Dunai, the headquarters of Dolpa. And the yarsagumba that go for around Rs 1.4 million to 1.6 million per kg in Dolpa fetch between Rs 1.6 million to 2.6 million in neighbouring Tibet.

Long regarded by locals as a vitality booster, yarsagumba is seen by buyers in foreign markets as an elixir for a host of problems. In markets such as China, it is sold as a supplement that helps people suffering from sexually transmitted diseases, tuberculosis, whooping cough, kidney diseases, lung diseases, high and low blood pressure, fatigue, weak immunity, and irregular menstruation, among others. Besides being sold in its whole, dried form, yarsagumba is also ground and mixed with rice and tea and sold as ‘yarsagumba rice’ and ‘yarsagumba tea’.

This year’s harvest ban has had a ripple effect along not just the overall yarsagumba value chain, but also crippled the economy that has grown around the insect-herb. In prior years, markets of the district, including in Dunai, Tripurakot, Khadang, and Liku, would be abuzz with crowds of people buying the equipment and provisions they would need for conducting the harvest.

"A month before the start of yarsagumba season, various traders would put up in hotels here,” says Dharmasingh Rokaya, a local trader. “From early Baishakh to the middle of Baisakh, we would easily see close to half a million rupees worth of transactions. Goods such as clothes, salt, oil, rice, noodles, and biscuits would be sold, both for cash and on credit. The prospectors are usually allowed until Shrawan to pay off their loans.” Further, the National Park office at Suli Gad and the district’s community forests would annually earn tens of millions of rupees merely from collecting entrance fees and issuing yarsa-collection permits to the people entering the district. But those revenue streams too have dried up this year.

Before the yarsagumba boom, Dolpa’s villagers used to mostly farm, but with the growing demand for yarsagumba, almost everyone gave up farming and became dependent on the yarsagumba economy. It’s no surprise then that Dolpalis don’t want to see this year’s yarsagumba harvest go begging. Since there is no case of coronavirus infection in Dolpa till date, say Dolpalis, perhaps the government could rethink the ban. For instance, they reason, at least the district’s inhabitants should be allowed to harvest the insect-herb, and they are willing to abide by the most stringent protocols the government draws up.

Read also: Surviving the pandemic as an indigenous populace

But for now, local authorities want to err on the side of caution. “We can only think about lifting the ban once we conduct a series of meetings with different stakeholders,”says District Coordination Chief Sher Bahadur Budha. That decision will probably be made at the end of Baisakh.

For yarsagumba collectors like Rokaya and thousands of other Dolpalis, this year’s interminable month of Baisakh can’t end soon enough.

Bishnu Prasad Devkota  Bishnu Devokta is a journalist based in Dolpa.

Socio-economic mental health stressors are on the rise

Part 1 of the conversation with educator and psychologist Madhav Khatiwada on the need for improved mental health infrastructure in Nepal.