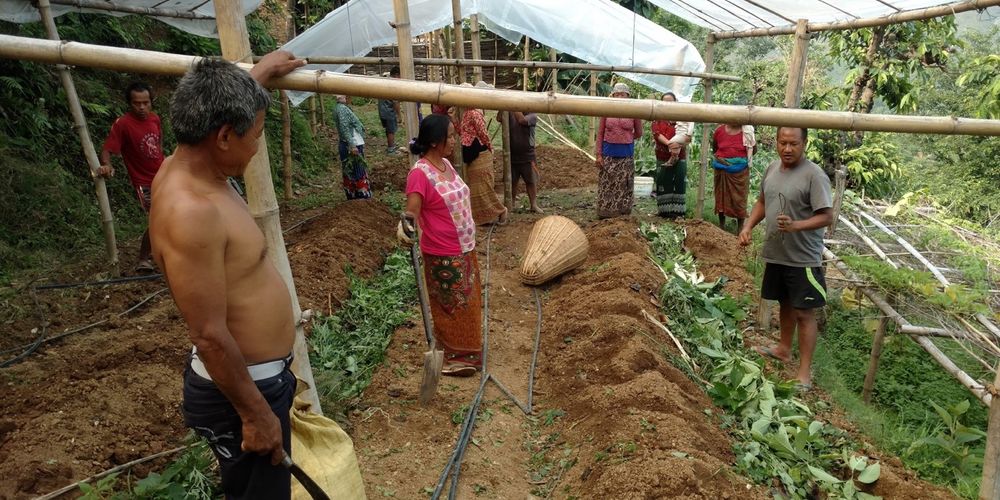 Jhak (right) gives a training to his village farmers' group on how to prepare raised beds for monsoon season tomatoes in the covered tunnels, Syangja, June 2018. (John Buscarino)

Nepali village life in the Middle Hills has lost vitality in the past few decades. We can attribute this to the war, to the earthquake, to labor migration; amongst  many other valid reasons. Villages are half empty, with more elderly than young, more women than men; labor loads are unequal, land is left abandoned. People leave their villages in search of work and educational opportunities. Homegrown crops are mostly fed to animals, and a large portion of staple foods in the modern Nepali diet are imported from China & India.

To engage a discussion about how a Nepali family can support itself economically from the village, I think we have to consider the big picture: What are Nepal’s assets and resources as a country for its financially self-sufficient future? Here’s what I see: diverse landholdings, unique microclimates, centuries of small-scale agricultural self-sufficiency knowledge and skills, a thick-skinned & hard-working people, and a culture of “making it work.” Nepal’s economy, livelihood, & people have always been connected to agriculture. To me, investing in Nepali farmers seems to be quite a logical and straightforward step in the direction of Nepal’s economic resilience.

The Middle Hills themselves tell this story. From a soil scientist’s perspective, Nepal has played an ever-losing game. Almost every agricultural research paper about Nepal’s Middle Hills published concludes the same thing: Nepali hill soils are poor, heavy, and nutrient-deficient. Traditional cropping styles are exhaustive, and unsustainable. Climate change doom with droughts & floods seem inevitable. Crop productivity is low and insufficient. Yet somehow, these mountain soils are the way Nepali villagers have survived for centuries.

Nepal’s economy, livelihood, & people have always been connected to agriculture. To me, investing in Nepali farmers seems to be quite a logical and straightforward step in the direction of Nepal’s economic resilience.

Nepal is tough, but something’s gotta give. Clearly, the old way of doing things in the village isn’t working. But we love village life. “Hawaa paani ramro chha.”  What would Nepal be without its baari’s and khet’s? There’s so much agricultural history & wisdom to be preserved in order to inform the future.

Staying stuck in iterations of the same system, resisting a departure from the “known” (as J. Krishnamurti might say) will not serve Nepal in the face of waves of massive change. We’re talking climate change, capitalism, globalization. It seems like people only see two options these days: live in the village and have no money, or go to Dubai. Are those really our only options? Or are we just not thinking outside the box?

What does it mean to innovate?

How much is experimentation valued in Nepali society?

I found myself asking these questions a lot as I worked with farmer’s groups and brainstormed income-generation ideas with villagers in five districts this year. Innovation, to me, is the practice of visualizing the “parts” of a thing, and the subsequent willingness to reorganize, eliminate, redesign, and collaborate over them. Experimentation is the willingness to try something different with the knowledge that you will fail most of the time. On a good day, I’d say in my own life I’ve got about a 1 out of 50 experimental success rate. But the few successes are life-changing, mindset-altering. “You have to be brave before you can be good,” could be the motto for basically anyone who has ever made a difference in anything.

Let me give some examples. I happen to know a fair number of rebel Nepali farmers. Take my friend, Bikash, from Gorkha: when his family wouldn’t let him start a suntala orchard at 13, he ran away from home for 3 days. They relented. After planting his 300 trees, he spent a couple years working construction jobs around the country. He hated it, and returned to the village as soon as he could, determined to be a full-time, long-term farmer. He’s 26 now, with terraces full of suntala, banana, avocado, coffee, dragon fruit, lemons, limes, and peaches. This year, southern Gorkha got hit with citrus greening like Lamjung has in the past. Most of the suntala farmers in his village lost the majority of their trees. He lost 200 of his trees himself. But the last time I saw him he told me he has 300 new holes dug. Obviously, suntala is not a good investment moving forward. “What should I try next? Go big on avocado? Pomegranate? Coffee? The markets are looking good…”

Then there’s Jhak from Syangja. He spent most of his adult life working in Kathmandu and abroad, including 9 years in Dubai as a clerk at a bank. In the end, despite the steady paycheck, he couldn’t take it anymore and returned to his ridge-top village, with the big mango tree chautara and the chilaaune trees. He knew nothing about agriculture. He had never accompanied his mother and siblings in the fields, he had never had a garden of his own. But he was determined to stay this time, and he noticed others in the village struggling to make ends meet. The price of tomatoes in the local market was high at the time, almost 200 rupees per kilo in the off-season. Why not start there? He appealed to his district agriculture office for funds and discounted materials, and convinced the village farmer’s group (made up mostly of women whose husbands were abroad) to start 30 tunnels for tomato production that year. The first 3 years of tomatoes were great and the farmers group turned small profits. But then monsoon blights kicked in and the fourth year was a complete bust. This year, with Jhak now as the president of the farmers group, 500 macadamia trees, 250 avocado trees, and a slew of other odds and ends like grapes, starfruit, and papaya went in the ground in Jhak’s village. If not tomatoes, something else. The farmers talk about planting these trees not for themselves, but for their children. Restaurants in Lakeside, Pokhara are already asking if their avocado trees are fruiting yet!

Diki & Kumari are two peas in a pod from neighboring villages in Sindhupalchowk. These two young women get flack all the time for aspiring to be farmers, but it doesn’t matter to them. Wouldn’t they rather use their education and get a job in Kathmandu? Shouldn’t they be married by now anyways? Fan for the flame. Diki is so hard-working that I find her intimidating, despite the fact that she’s six years younger than me. She patrols the apple, almond, kiwi, and timbur trees on her family’s land like a soldier. She’s always preparing for the next wave of planting, watching for evidence of insect and disease. She lectures other villagers, even her elders, on their laziness. “Why haven’t you planted trees in your banjho jagaa? Aren’t you thinking of your grandchildren?” Kumari is getting a college degree, working as the agricultural technician for a local NGO, and still farms in her spare time. She’s growing shitake mushrooms behind her house, local heirloom vegetables in her garden, and she has even experimented with Jamacian hibiscus this year. Half of her coffee trees died due to cold last winter, but she’s already replanted them all and intends to double efforts this year.

Finally, there’s Pasang. You can tell from the second you meet him that he’s bright. He grew up mostly in Kathmandu, sent out of his high-mountain village in Dolakha for a better education at a boarding school. He returned to the village in his twenties, got connected with a small tree nursery in Kavre, took several trainings in fruit tree cultivation, and now grafts seedlings as well as the trainers themselves. He’s been collecting painyun (wild cherry) seedlings from the forest around his family’s upper land, planting them in his terraces, and grafting them with Western Cherry branches from the Kavre nursery to produce Bing and Ranier cherry seedlings at 2200m. His experiments have shown him that planting the wild rootstocks directly in the ground, instead of in plastic nursery bags, result in a grafting success rate that’s twice as high. Within a year or two his cherry trees should start flowering and fruiting. In the meantime he’s onto making local aarubakara (plum) wine.

I think this quote by the famous fermentation artist, Sandor Katz, says it best:

“My advice is to reject the cult of expertise. Do not be afraid. Do not allow yourself to be intimidated….Do-it-yourself is an ethic that is practiced by many different people. It is an attitude of self-empowerment and openness to learning.”

It’s this approach, this simple bravery & boldness to try new things (and fail) that will breathe life back into Nepal’s agricultural villages. Let’s rethink the wheel. Are we willing to abandon some traditional farming practices that have proved to be unsustainable? Are we willing to break old habits for the sake of innovation? Let’s look at what we have available. Wild edibles, heirloom grains, seeds & vegetables, microclimates appropriate to grow pretty much any fruit or nut on the market, medicinal herbs. Can we set goals for Nepal to stop importing what we can grow ourselves?

The idea is to adapt to a changing natural, social, and economic environment. Prejudices based on race and class, hierarchies & bureaucracies, strict gender roles, can limit growth and progress just as surely as the steep slopes and narrow paths of the mountains have limited mechanical advancements in agriculture.

Let’s look at the past. How can we draw from centuries of agricultural wisdom, and take informed risks to create new opportunities? How can we find a balance between tradition & innovation? It’s like retrofitting a dhoko to harvest our first apple crop in the orchard. “Old” or “poor” crops like latte (amaranth) become marketable “organic superfoods.” Or, as another example, we know that if we plow less, and stop removing or burning the rice/corn/wheat/millet straws at the end of the cropping season, we don’t have to carry manure to the fields. Thus, we don’t need so many animals, and we save ourselves a lot of work. There are many ways to rethink Nepal’s current accepted farming systems in the villages.

The idea is to adapt to a changing natural, social, and economic environment. Prejudices based on race and class, hierarchies & bureaucracies, strict gender roles, can limit growth and progress just as surely as the steep slopes and narrow paths of the mountains have limited mechanical advancements in agriculture. We should also pay attention to what is influencing our vision of Nepal’s future. Perhaps the questions we ask should look more like, “How can we support bottom-up change through motivated village communities?” than, “How can Nepal look more like the US or China?”