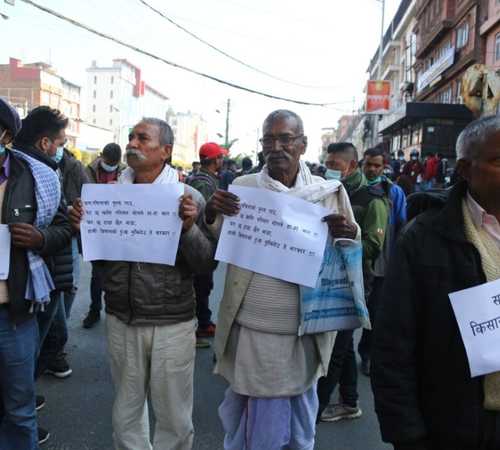 For the second time in as many years, Narayan Raya Yadav had come to Kathmandu not because he wanted to but because he was compelled to. He had joined the protests by sugarcane farmers in Kathmandu to exert pressure on the government to help them get the money owed to them by the sugar mills back home. Yadav was determined, as were other farmers in the protests, to not return to his village until he had gotten his money, which in his case was NRs 2.4 million.

But a day after the government assured the protestors that the farmers would get the remaining due payments from the sugarcane factories, Yadav returned home in a coffin. Sixty-four-year-old Yadav died of cardiac arrest on Tuesday, 16 days after the start of the protests.

During the protests, Yadav had put up at the Krishna Temple in Jorpati, while most of his fellow protesters stayed in Gaushala. According to Rakesh Mishra, patron of the Sugarcane Farmers Struggle Committee, Yadav had fainted on Tuesday morning and was admitted to the nearby Helping Hands Hospital. He was then referred to Shahid Gangalal National Heart Centre, where he died while undergoing treatment.

“We were not prepared for this. The government is responsible for his death too. We will continue the fight,” said Mishra.

After the Capital saw 16 days of protests, the government on Monday convinced the farmers to withdraw their protests, after it made a commitment to recover the farmers’ remaining due payments within 21 days.

Had the government sincerely implemented the agreement signed with them last year, the farmers would not have traveled to Kathmandu this winter. The government had promised to help them get their money last year too--without actually delivering on the promise--which is why, this time around, the farmers were determined to return home only after they got their money.

This year’s protests were briefly overshadowed by the larger national political saga, but the farmers continued their protests alongside the national political leaders gathered in Maitighar, who have been staging protests against Prime Minister KP Sharma Oli’s move to dissolve the House of Representatives. But although they shared the same venue, the protesting leaders have reportedly never tried to meet with nor listen to the grievances of the agitating sugarcane farmers.

“The recent political upheaval is one of the factors that dampened the mood of the protesters, and that’s also why we settled for less. However, some of us will stay in Kathmandu to follow up on the government’s commitment,” said Mishra.

Narayan Raya Yadav was owed more than NRs 2 million by Annapurna Sugar Mill. In desperation, he had turned to taking out loans to take care of his family of five (three sons and a wife). After countless attempts to collect his dues, he realised that joining the protests in Kathmandu was his only option. He had been part of last year’s futile protests too.

“We have been fooled twice already. The government convinced us by showing us documents that show that the government will apparently ensure that the mills pay the farmers. We have to give them the benefit of the doubt. But that does not mean we will stop protesting,” said Maya Shankar Prasad Yadav, one of the protesters.

Sugarcane is a major cash crop in the plains. This year, due to the Covid-19 crisis, farmers were not able to procure chemical fertilisers on time, nor were they able to grow and sell other vegetable products. Because the farmers have not been paid by the sugar mill operators, they are in dire need of money to settle the loans they borrowed from banks, mostly for managing their household expenses. The banks have already issued public notices saying they will seize the farmers’ land and other properties if these loans are not paid.

For years, the farmers have also not been able to fetch a fair price for their produce. This year, the government has finally set a price of NRs 544 per quintal of sugarcane. Earlier, the farmers were also required to supply their sugarcanes to mills that lay within a radius of 10 km.

“Now, we can sell our produce to any sugar mill within the country, and at a fair price, but first we want to get paid our long-overdue money,” said Mishra, who argued that if the government were to better oversee the sugarcane sector, it could become a major employer in the the Terai and feed many families.

According to government data, sugarcane is cultivated on 217,867 hectares of land, mostly in eastern Nepal’s provinces 1 and 2. Nepal annually produces around 4.346 million tonnes of sugarcane.