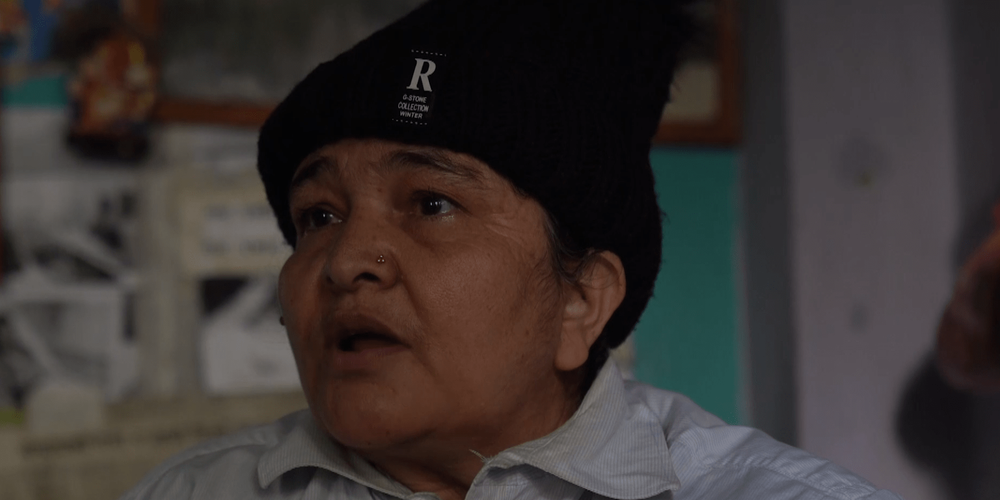 Gangamaya Adhikari has been awaiting justice for a long time. On June 6, 2004, Gangamaya’s teenage son, Krishna Prasad Adhikari was abducted and allegedly killed by former Maoists rebels who accused him of spying on the State’s behalf. A resident of Gorkha in western Nepal, Krishna Prasad was on his way to his grandparents’ home in Jayamangla, Chitwan, when he disappeared mid-journey.

Following their son’s death, the Adhikari family spent years campaigning for his murderers to be brought to account.

Nanda Prasad, Gangamaya's husband, died in September 2014, after nearly a year of staging a fast-unto-death.

The former Maoist rebels have called Krishna Prasad’s murder an “unfortunate” incident which took place at the height of the civil war. Gangamaya has different views.

“Those who killed my son were murderers disguised as rebels,” she told Record from her room in Bir Hospital where she has been cooped up for the past eight years.  “His murder had nothing to do with politics or any political cause.”

Nanda Prasad’s body is still at the Maharajgunj-based Tribhuvan University Teaching Hospital as the family has refused to receive it until her son’s murderers are sent to jail.

"They can do whatever they like [with the body] when I am dead,” she said. “But I won't cremate it until we get what my husband had been fighting for -- justice for my son,” she said.

For Gangamaya and thousands of others like her, their only hope for justice now rests on the two transitional justice bodies: the Commission of Investigation on Enforced Disappeared Persons(CIEDP) and the Truth and Reconciliation Commission (TRC).

The two commissions were set up in 2015, nine years after the signing of the Comprehensive Peace Agreement between the former rebels and the State, to carry out investigations into incidents of human rights violations, crimes against humanity and to facilitate reconciliation.

Since then the two bodies have collected over 63,000 complaints which include disturbing accounts of victims who were jailed or tortured and testimonies of family members whose relatives were either killed or disappeared.

But the government’s unwillingness to amend the Truth and Reconciliation Commission Act as per the 2015 Supreme Court ruling, which struck down provisions that gave discretionary powers to the commissions to grant amnesty to those responsible for committing grave human rights violations, has cast doubts over its commitment to take the peace process to a logical ending.

These doubts were further renewed last month when a recommendation committee made public the names of the new appointees to the commissions, which as feared by human rights groups and conflict victims turned out to be all political appointments.

On Saturday, January 18, the Nepal Communist Party (NCP) and Nepali Congress (NC) recommended Ganesh Dutta Bhatta as the new chair of the TRC and Yuwaraj Subedi as the head of the CIEDP. Bhatta, an associate professor at Nepal Law Campus, is close to the Nepali Congress, while Yuwaraj Subedi, a former joint attorney, is close to the NCP. Amid criticism from the civil society and victims groups, the two along with other members of the commissions were sworn in last month.

“This is a betrayal to transitional justice,” tweeted human rights activist Charan Prasain after the names were made public.

Conflict victims, civil society and the international community including the United Nations have repeatedly expressed concerns over the government’s continued apathy towards settling the war-era crimes, and had urged the state to engage in broad-based, meaningful consultation with all concerned stakeholders.

“It was apparent from the beginning that these commissions would fail as it was formed to give jobs to cadres,” said Bhagiram Chaudhary, Chair of the Conflict Victims Common Platform (CVCP), an organization of victims. “Such tendency won’t work anymore. Victims should have a bigger role in  formulation of the law and appointment process.”

Many implicated in war-era crimes now hold powerful positions in the government and the ruling party which was formed through a merger between the CPN-UML and the UCPN (Maoist Center) in 2018. The NCP which enjoys a two-thirds majority in the parliament has used its power and influence to avoid any accountability for the crimes.

The party’s decision to nominate Agni Sapkota, who is one of the accused in the murder of Arjun Lama, a case that is pending at the Supreme Court, as the new Speaker of the Federal Parliament spoke volumes about its commitment to transitional justice.

Insiders say that the government and political parties have also been working to create a rift  among the victims, and divide them along various lines based on their political orientation and war history.

Chaudhary’s organization, for instance, had pitched a proposal to form a high-level political mechanism to oversee the works of the two commissions. The proposal has brought serious rift among victims and civil society members with a section calling it a ploy to grant impunity to perpetrators of atrocities.

After the CVCP put forward an eight-point charter on November 16,2018, with a recommendation to form a political mechanism, Ram Bhandari, one of its most prominent members, distanced himself from the platform and announced formation of a separate organization called Conflict Victims’ National Alliance for Justice.

Bhandari said that they parted ways with the CVCP because they thought the proposal was  “a ploy to sabotage the truth and reconciliation process.”

"The same people who were in the frontline of the struggle to form the TRC and CIEDP are being used as pawns by Nepal Army and some leaders of the ruling party to sabotage the entire process for petty gains," said Bhandari, whose father was disappeared by Nepal Police during the war.

Bhandari’s organization wants the government to book those responsible for committing heinous crimes during the conflict years, by adhering to Nepal’s commitments to international laws, treaties and conventions ratified by the Nepal government.

The international community has long expressed concerns over the sluggish pace of investigation of war-era cases. So far, CIEDP has completed 80 per cent of its mandated task and carried out a detailed investigation of 2,100 cases of forced disappearance. TRC, a body with a much larger mandate, was able to look into 3,000 of 61,000 registered complaints in the last four years.

“We were able to do a lot of things in the last four years,” Lokendra Mallick, former CIEDP head, told Record. “We could have done a lot more had the government provided much needed support on time.”

For victims like Gangamaya, such explanations don’t mean anything.

After staging several rounds of hunger strikes over the years, her body has grown weak. Her limbs are swollen from the medications she has had to take. There is hardly any trace left of her younger self seen in old photos pasted on the walls of her hospital room.

Some of the human rights defenders and civil society members who advocated in favour of transitional justice are now holding plump posts in the governing alliance. And many, she says, have forgotten her.

“They always come up with some excuse when I call them,” said Gangamaya when asked about her relations with rights activists.

She also expresses disappointment with the way news outlets have reported on her case.

“Just a few weeks back, some media outlet reported that I had received money from the government. Isn't it their duty to ask me before running such baseless news?” asked Gangamaya.

There are plain clothes policemen stationed outside her room around the clock. She says she is being treated like a criminal by the State.

“I am not allowed to walk outside at my freewill,” she told Record. “And I feel like each movement of mine is being monitored.”

Despite the lack of positive developments, Gangamaya is not ready to give up her fight for justice.

“Those criminals killed my son. The government killed my husband, and jailed my other son. I have nothing to lose or fear now,” she said.

Gangamaya said that she plans to start an indefinite hunger strike outside the UN office in Kathmandu if the current government continues to dismiss her call for justice. On February 4, she met with the UN resident coordinator, Valerie Julliand in the Capital.

"They said that the international community stands with me in my struggle for justice, but asked me to give some time. Let's see what happens,” said Gangamaya.

A short documentary on the struggles of Gangamaya releases tomorrow. Stay tuned!