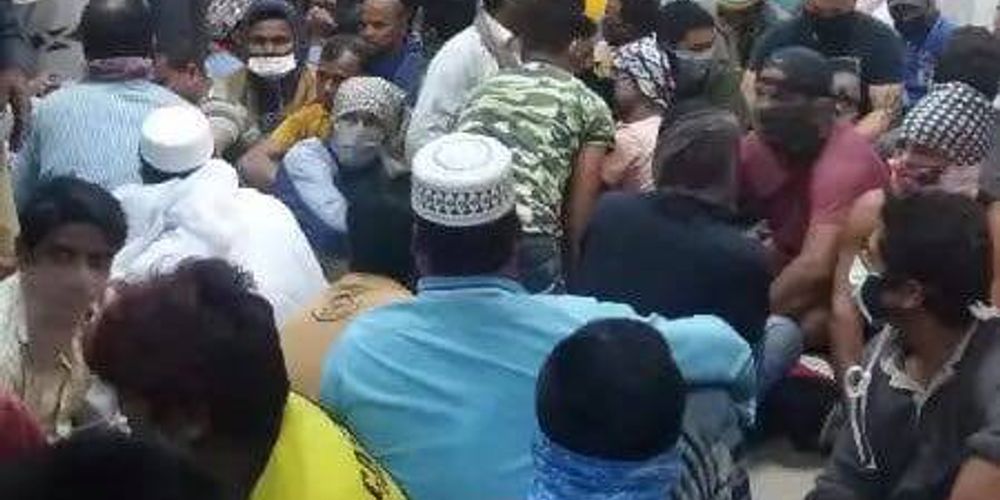 (Nepali and other South Asian migrant workers in Qatar's jail before they were deported on Thursday. /Narayan Sigdel)

When Salim (name changed) boarded a flight for Doha at the Tribhuvan International Airport about a month ago, he believed his life was about to take a turn for the better. Born to an impoverished farming household in Kapilvastu, Salim had always wanted to go abroad and strike riches so that he could provide a comfortable life to his family. A month on, hopes have given way to frustration as Qatar remains locked down due to Covid19, a fast-spreading pandemic that has brought the world to its knees.

"All I’ve been doing since I arrived is eating and sleeping. Our street is on complete lockdown. Life has become uncertain," Salim, who lives in the Sanaiya industrial area in Qatar, told the Record over the phone. A general labourer, Salim now worries about the loan he had taken to pay the recruitment agent who helped him find his job as a construction worker.

As countries in the Gulf and Malaysia resort to lockdowns and other measures to contain the Covid19 outbreak, millions of migrant workers, including an estimated 2 million Nepalis like Salim, are facing mounting uncertainty, restrictions and even outright discrimination. Many are living with a sense of  being trapped due to Nepal's recent decision to indefinitely shut its doors, prohibiting them from returning home. On March 19, the government announced that all international flights would be suspended beginning the very next day. The decision to bar its own citizens from entering Nepal on a day’s notice has met with widespread criticism from human rights groups and the general public.

"Although my employer has been providing daily essentials, panic has certainly taken over,” said Salim.

The Record spoke to six other workers in Qatar, all of whom conjure a sense of unspoken yet palpable fear among Nepalis following aggressive crackdown on camps, arrests and deportation. Qatar has deported more than 400 Nepalis for allegedly disobeying the curfew in the last few days.

"The CID police arrested us while we were watching a volleyball game in the Sanaiya area. They said they were detaining us for corona related screening. We readily agreed to go. Instead, we got locked up in jail for five days before being sent home," Narayan Sigdel, who was deported alongside 150 Nepali workers on March 19, told the Record. Despite the government's announcement to make 14-day self-quarantines mandatory for all passengers flying into Nepal, neither Sigdel nor his friends were explicitly asked to do so. They have since returned home to Nawalparasi.

Kumar Chaudhary, a Doha-based worker who hails from Dang, said the situation is becoming increasingly precarious for workers living in labour camps, where living arrangements are such that one room accommodates six to seven people.

"Things are normal in the area where I live. But it's hard for workers who live in camps with 200 to 300 people," said Chaudhary.

The situation is scarcely better elsewhere in the Gulf or Malaysia, collectively home to more than 80 percent of Nepali migrant workers.

"Things seemed normal until Tuesday. The government had been telling people there was nothing to worry about,” said Bed Kumar Bhattarai, a worker based in Kuala Lumpur. “But it was a gross misreading of the situation. Now there has been a sharp spike in the number of infected cases. The city is in lockdown. The metro has been closed. Only a few buses are operating on the streets."

Workers in Malaysia say that big factories have shut down operations and most Nepalis are largely staying indoors out of fear that they might contract the virus. However, those working in small companies are still continuing to work.

"No Nepali worker has tested positive for corona yet. But there is obvious panic. Most are taking basic precautions like social distancing. Others are carrying out their usual business. But some are still refusing to believe in what’s happening and are calling this a hoax," added Bhattarai.

With the rise in Covid19 cases, Nepal's mission in countries like Saudi Arabia, United Arab Emirates, Oman, Bahrain, and Kuwait have urged workers to stay indoors and follow the order of local authorities. But these messages are not effectively reaching out to the migrants, most of whom live in far-flung areas.

Human rights groups and workers' groups say migrant workers in the Gulf and Malaysia are particularly vulnerable to the Covid19 outbreak as most of them do not have access to basic healthcare or decent living conditions.

Nicholas McGeehan, an expert on migrant workers' issues in the Gulf, stressed on the need for greater scrutiny on labour receiving countries.

"Workers need testing, medical care, the ability to isolate and a guarantee on their salaries. Instead, they are being effectively confined in unsanitary camps or simply deported," McGeehan told the Record. "This response is not just callous, it appears to also be extremely dangerous in light of what we know about this virus and how it spreads."