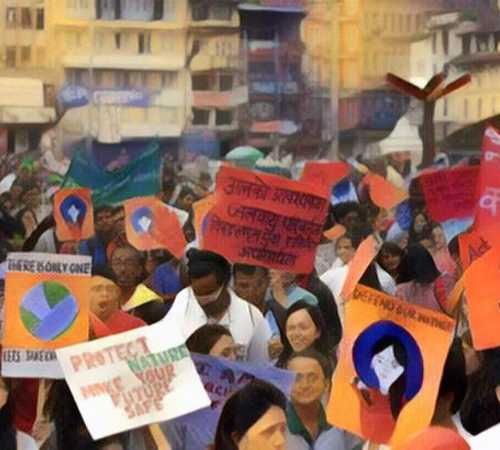 Climate change is a multifaceted global crisis. It affects human lives at each level of organization – the individual, the community, the state, the region, and the world at large. Perhaps our largest modern communication failure as a species has been the categorization of issues surrounding climate change into isolated bubbles of nature conservation, greenhouse gas emissions control, food security, extreme weather, and the like. Missing from the discourse until very recently was the socio-economic dimension of the climate super-phenomenon. Thankfully, the last two-and-a-half decades have seen conversations around sociological and economic contexts begin to share center-stage in discussions surrounding the climate crisis.

The popularity of the term ‘climate justice’, as evidenced by a quick look at Google search trends since 2005 is an indication of social, economic, political, and ethical elements entering the climate conversation. Historically marginalized groups already positioned with unique systemic vulnerabilities often face the severe consequences of climate change. In most cases, they are least responsible for the crisis themselves, and yet, are likely to face its worst effects. These consequences are not just in the form of extreme weather, food insecurity, and displacement, but also in the form of becoming further disadvantaged by climate action policies that reinforce and exacerbate existing inequalities.

A large body of recent literature has found a strong positive relationship between climate change and conflict in many forms – from increased numbers of heat-induced aggressive behavior to resource-scarcity wars, from increased risk of accidents caused by negligent driving in heat to more aggressive foreign policymaking practices.

Read also: Women are seen as victims in the fight for climate justice, and that needs to change

Climate change is recognized by researchers across the world as a serious aggravator of gender-based violence. A 2020 study by the International Union for the Conservation of Nature (IUCN) found a number of convincing causal links. Perhaps the most intuitive one posited that growing resource scarcity increases instances of violence against women at both the household and community levels. Increased drought, desertification, and the drying up of wells were found to be the strongest identifiers – as fetching water is often a woman’s job. Thus, resource frustrations can not only trigger violence at home but having to walk farther for water brings with it increased risk of sexual assault.

Another 2020 study found strong connections between irregular rainfall and spousal abuse in rural Peru. Findings showed that the prevalence of intimate partner violence increased by an astounding 65 percent after drought events during cropping season. On the flipside, unexpectedly high rainfall-induced floods were not found to be directly linked with instances of abuse, suggesting food and business insecurity frustrations might have primarily facilitated this behavior. Poverty-related stress and intra-household bargaining dynamics have also been posited as both causes and further aggravators of patriarchal power imbalances across countries in a number of development economics studies over the decades.

Nepal’s low gender-parity metrics, coupled with chronic poverty and longstanding patriarchal norms, suggest similar mechanisms could be present here. A 2019 study published in BMC Women’s Health examined the risks of intimate-partner violence in Nepal through a series of multivariate mixed-methods analyses. The authors found a number of characteristics associated with intimate-partner violence, including caste, employment status, income stress, husband’s alcohol intake, exposure to violence as a child, and violence among in-laws. Perhaps the study’s biggest contribution to the existing body of literature is the suggestion of probable intergenerational transmission of attitudes supportive of intimate-partner violence, a deeply concerning conclusion given the rising number of extreme weather events and poverty triggers in Nepal.

The IUCN study cited above also found that girls in Ethiopia and Sudan were disproportionately sold off in child marriage arrangements during seasons of extreme droughts, often in exchange for crops and cattle. Considering the long history of child marriage, dowry, and vulnerability to heat waves and droughts in the Tarai belt, similar mechanisms could be at play in the understudied southern region of Nepal as well.

Studies such as the ones highlighted above add to the urgency of rethinking environmental degradation and its effects in a more nuanced manner. Gender-based violence is prevalent in various degrees and forms, across countries, cultures, and contexts. It is thus imperative that the issue be addressed alongside climate change mitigation and adaptation strategies. As long as gender-based violence is viewed as an isolated issue outside of the climate discourse by policymakers, advocates, activists, and concerned citizens, pathways that reinforce power imbalances risk remaining ignored.

Additionally, since social norms are at the core of gender-based violence, careful consideration needs to be given to how women and other non-binary genders are portrayed in the climate change discourse. While there are a number of clear vulnerabilities unique to certain groups, narratives suggesting a victim position are likely to reinforce the very inequities that enable climate change in the first place. Such nuances, especially at the policy-making level, can thus perhaps only be appropriately addressed by including members of all genders in relevant decision-making tables.

An interesting case that addresses gender-based violence as a part of sustainable development comes from USAID’s Hariyo Ban program. The campaign identified women reporting unique problems while engaging in conservation work such as patrolling forests, participating in meetings, speaking to local leaders, and holding leadership positions themselves. Upon realizing the need to address these concerns, the program took steps to raise awareness on the violence being faced by women, and further launched campaigns supporting the mainstreaming of national social inclusion policies. Hariyo Ban eventually formed a long-term partnership with CARE Nepal, an organization that specializes in addressing gender-based violence, to inform their own conservationist capacity building efforts, which USAID publications have acknowledged as an important step in building better conservation practices and setting up safer community forests across the country.

Examples like Hariyo Ban, however, are rare. While Nepal has strong networks of civic-space organizations, international donors, research institutions, and human capital (including volunteer forces) working in both gender-based violence and climate change spaces, instances of collaboration between the two areas have not yet been normalized. Looking forward, the inclusion of women and other minority genders, as well as organizations specializing in issues pertaining to vulnerabilities faced by minority groups, is of paramount importance in the fight against climate change. Not only will this form of intentional inclusion facilitate the march towards an equitable society, but it will also position us to better tackle the existential threat of climate change.

Changing the culture of silence surrounding mental illness could save lives