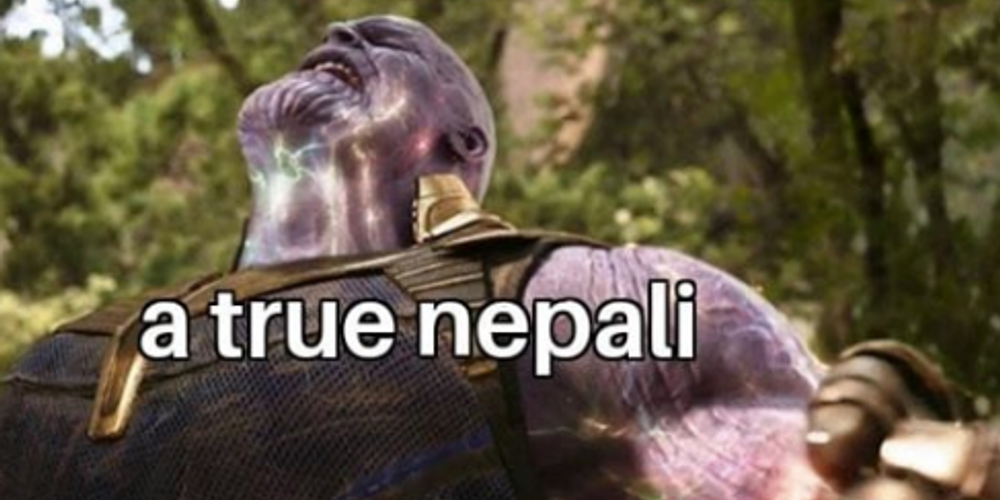 In the Marvel cinematic universe, six stones contain the six essences of the universe – things like “soul,” “space” and “time.” According to a meme by Brishank Adhikari, a 24-year-old engineer in Canada who has lived outside Nepal since he was six years old, for a “true Nepali” the six essences are “momo,” “dal bhat tarkari,” “our flag is the only triangular flag,” “Mt. Everest is in Nepal,” “Buddha was born in Nepal” and “we are not Indians.”

The meme was posted to the Facebook group Subtle Nepali Traits (SNT). Created in April 2019, the group has over 9,000 members, most of them aged 18 to 24 and living in the United States, Australia and Canada. SNT follows a long line of “Subtle Traits” Facebook groups. The Subtle Asian Traits page, which has over a million members from the Asian diaspora, became a global sensation, with an outpouring of first- and second-generation immigrants sharing memes about their love for things like bubble tea and using the group as a support system to get advice on immigrant parents and being part of a minority. The Subtle Curry Traits page, which has half a million members, is made up of primarily South Asians who couldn’t relate to all the Subtle Asian Traits memes.

Adhikari has been active in the group since he was added to it by his cousin, who heard him talk about his lack of Nepali friends in his home in Saskatchewan, a small, predominantly white town of about 200,000 people. He has posted about how he didn’t feel fully Nepali or fully Canadian, and has put up polls to gauge where members are from and what they do. He has also posted memes about the imminence of arranged marriage, the importance of momos, and how gotras are the most effective form of birth control.

Subtle Nepali Traits was created by Sujal Sigdel, a 20-year-old pre-med student from Virginia. Sigdel says she was surprised the group didn’t exist already, given Nepal’s lack of representation in SCT, which has largely Indian and Indian-American members. The few memes about Nepal in SCT are about Nepalis’ frustration at having to explain what Nepal is. “Nepalese people can’t just be lumped into brown culture or desi culture,” Sigdel said. “There’s so much that’s specifically Nepalese.”

But at first, it seemed like the sole “subtle” Nepali trait was enjoying momos. The admins and moderators – who discuss what memes to approve and disapprove based on how “appropriate, humorous and authentic” they are, according to Sigdel – received memes only about momos: About the abomination that is eating momos with ketchup, about diaspora Nepalis losing their “momo virginity,” and about how admins only approved memes about momos. “You know how important momos are to us Nepali people,” Adhikari said.

The group references things said by Nepali parents or objects and traditions in Nepali households. A common meme is about how Nepalis abroad opt for things that aren’t seen in predominantly white communities but are available in Nepali households, like Sancho or Jwano water. One meme refers to the healing properties of besar, so healing that it wouldn’t be surprising for Nepali mothers to say “besar khau thik huncha” – have besar, you’ll be fine – for coughs and for broken bones. In another, a son wishes his father “Happy Father’s Day,” and gets the reaction “American huna nakhoj” – don’t try to be American.

In Subtle Nepali Networking (SNN), an offshoot of SNT, young Nepalis abroad can get career advice from other Nepalis and discuss things they don’t feel comfortable talking about with their parents or non-Nepali friends. One poll showed that group members were interested in mental health, cultural identity and generational gaps. Members of the group now post weekly discussion questions about things as diverse as their upbringing (whether parents talked about sex and STIs) and the lack of successful Nepali startups.

SNT and its offshoots – like SNN or Subtle Nepali Dating, where single Nepalis can meet each other –  are reminiscent of Nepali student associations in large North American universities. When she arrived at the University of Virginia, Sigdel said she found a community at its Nepali Students Association. Members routinely gathered, had Nepali food, staged cultural shows, and recreated what they had at home and might miss while being away. These associations, especially common in states with large Nepali communities like Texas or Virginia, allowed them to “be Nepali together,” Adhikari said, which he isn’t able to do in his small town.

When he first came to Canada, Adhikari said, he “could sing and dance like a Nepali” but he can’t anymore. Despite talking to his parents in Nepali, his Nepali is getting worse every year. He introduces himself to other people as Nepali because it’s “unique,” but he says it’s become harder for him to feel a real connection to Nepal. “Everyone on SNN and SNT is trying their best to maintain their Nepali roots,” he said. For people who have no access to a physical Nepali community but want a connection to Nepal, Subtle Nepali Traits is, Adhikari said, “the next best thing.”

The Nepal Police, government offices, private companies, restaurants, and your neighborhood uncle are all crazy about surveillance cameras. But who watches the watchers?