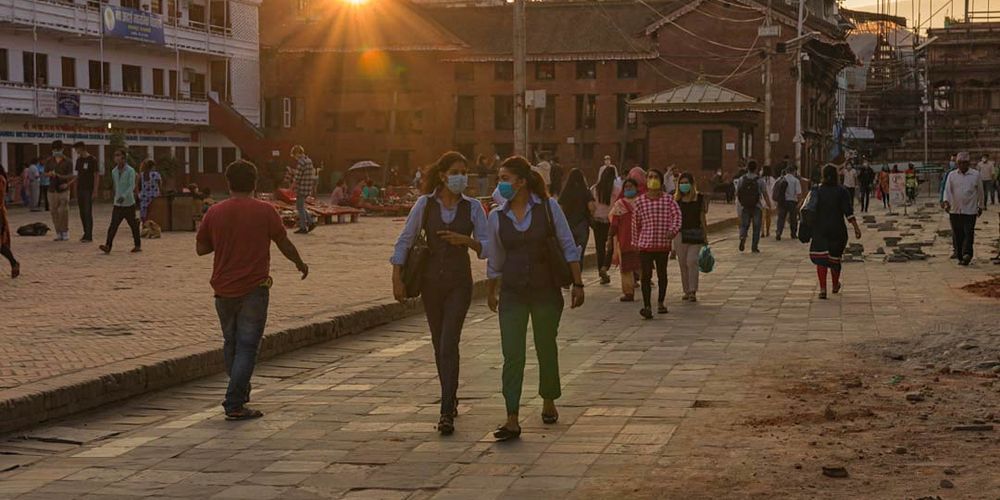 When the staff of Chirayu Hospital first informed her that she had tested positive for Covid-19 in early September, Laxmi Shrestha had been shocked.

“I felt like I had fallen off a mountain,” she recounts.

What followed for Shrestha was a downhill journey until her recovery, which came only after she had spent ten days and a massive fortune at another hospital. Initially, Shrestha had remained in isolation at her home in Chhetrapati after consultation with doctors. But her health had deteriorated rapidly and she began to show classic Covid symptoms such as high fever and breathing difficulties.

Shrestha’s family was more than worried — she had long been on medication for blood pressure and they knew this made her more vulnerable to falling critically ill. In sheer panic, her family went around Kathmandu trying to find a hospital that would admit her. Eventually, Shrestha was admitted to the ICU in Vayodha Hospital where Remdesivir was immediately administered on her.

For a couple of days, Shrestha continued to receive treatment while being in a semi-conscious state. Among other forms of treatment, she was also given plasma therapy, an experimental treatment for Covid-19 patients which uses the blood plasma of people who have already recovered from the virus. Thanks to her well-connected family, Shrestha was able to acquire the plasma easily; for a lot of patients, this is incredibly difficult.

Shrestha gradually responded to treatments. She was moved out of the ICU after six days and got discharged after spending four more days in a normal bed. The entire process cost her around NRs 400,000, but she says she doesn’t regret paying for it. In an interview with Sagarmatha Radio, Shrestha even said that she was happy to have received treatment from a caring and competent team of medical staff whom she credits for saving her life.

Like many other Covid-19 patients coming from affluent families, Shrestha had the resources and connections to receive treatment in one of the best private hospitals in the capital. Not all are as fortunate as her.

Since the first confirmed Covid-19 death in May, a total of 563 people have died after contracting the virus. Many of the deaths occured due to delays in testing, the unavailability of vital resources and infrastructure such as ambulances, and the lack of proper care and treatment.

In principle, the government is supposed to bear all expenses for the treatment of Covid-19 patients. According to Dr Jageswhor Gautam, spokesperson at the Ministry of Health and Population (MoHP), the government has been spending more than NRs 100,000 per patient receiving treatment at health facilities recognised by the government, including some private hospitals.

But the ground reality has been vastly different as under-resourced and understaffed government-recognised Covid-19 facilities continue to be overwhelmed by the inflow of patients. The lack of beds and ICUs in government-recognised hospitals is forcing many patients to opt for treatment at expensive private hospitals.

While there isn’t a standard rate that private hospitals are charging, it is consistently high. Some patients have spent up to NRs 1 million for their entire treatment, an inordinate amount to pay on temporary healthcare in one of the poorest countries in Asia. The cost could go much higher if symptoms are severe with the need of plasma therapy and long-term critical care. One factor compounding costs is the shortage of Remdesivir, an experimental drug that costs NRs 8,000 in India, but can cost upto NRs 60,000 in Nepal due to black marketeering.

The inequality within Nepali society has skewed the way in which Covid-19 affects people. People from low economic backgrounds, especially in the city, are more prone to getting infected due to the nature of their work or the fact that they share cramped rented accommodations with many others like them. They are the same people for whom paying for the treatment with their own resources is virtually an impossibility. When they have relied on the government’s Covid response, many have faced neglect and even death that could have been avoided had they been offered better care.

Covid-19 cases have continued to increase across the country, putting a strain on limited resources such as beds and ICU units in Covid-19 hospitals. The government has proven to be woefully inadequate at boosting the capacity of such hospitals to accommodate and treat patients. There are over 13,500 people in home isolation with an additional 9,118 in institutional isolation, both under suspicion of being infected with the coronavirus. Another 4,121 Covid-patients are in quarantine. MoHP has already announced plans to convert private hospitals into Covid-19 facilities, making necessary arrangements to provide affordable care, but this initiative has failed largely due to the reluctance of private hospitals.

In such circumstances, one would have expected an increase in the monitoring and inspection of the activities of private hospitals so as to guarantee treatment for patients at an affordable price. But this hasn’t happened, and it isn’t hard to guess why. Most private hospitals are owned by either leaders or big donors of major political parties, making it difficult to hold them accountable.

More distressing is the fact that the Oli government has not been able to provide free testing to the people who are too poor to afford it. Experts have long stressed on state-sponsored testing as a necessary measure to effectively control the spread of the virus as more than 25 percent of Nepal’s population is too poor to afford testing and treatment costs.

The failure to ensure mass testing has led to a rampant rise in the number of cases in impoverished settlements. Many living in far-flung areas across the country are being forced to borrow loans and arrive in Kathmandu or other cities and spend a fortune on transport, food, and accommodation just to get tested.

In recent days, Sukraraaj Tropical and Infectious Disease Hospital in Teku has struggled to manage the queues of people desperately waiting to get tested. It is one of the few hospitals in a city with a population of five million to provide PCR tests for free. In private institutions, the fee set by the government of NRs 2,000 for PCR tests has largely been disregarded with many hospitals still charging NRs 4,400.

When the Oli government first imposed a nationwide lockdown in March, the idea was to test every individual and control the spread of the virus the way China did. But it has failed miserably in its objective, and the number of Covid-related deaths have only continued to surge.

The latest proof of the government’s failure came when more than 80 people in the prime minister’s residence tested positive for the virus. The government now faces the difficult choice of deciding between opening up completely or continuing with a partial lockdown.

For the poor of Nepal, both decisions inevitably spell out some kind of suffering — they will either become victims of the virus who are unable to afford treatment or they will become victims of an economic shutdown that strips them of their already precarious financial lifelines.