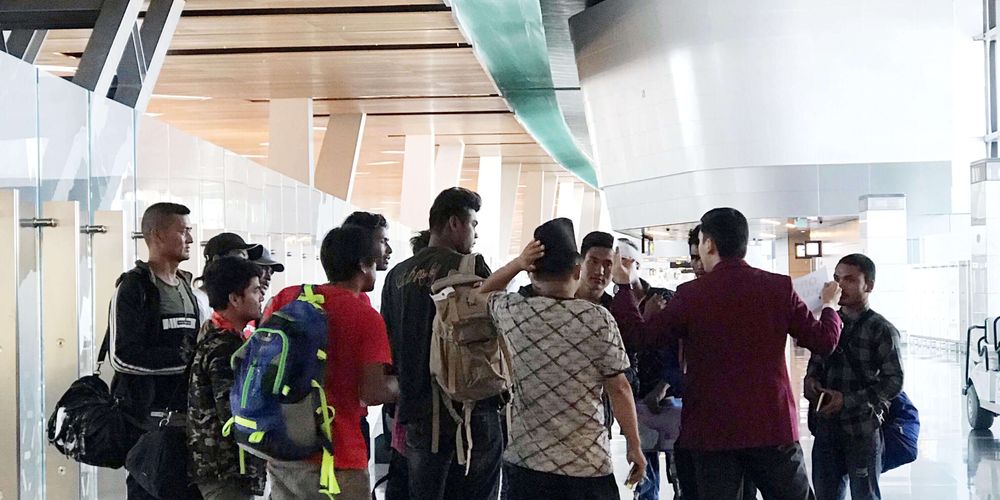 The COVID-19 pandemic has exposed the world community to unimaginable vulnerabilities. With every unfolding event we learn something more horrifying, chaotic and enduring at the core. The frantic debates around nationalism, manifestations of self-power and stupid whatabouteries are turning to be the things of past. These crises are exposing us to the real issues which test our nation’s capabilities to address them, or the lack of them. One way among the many that Nepal got affected by this pandemic is the fate its unskilled migrant workers have met. The Government of Nepal has laid out an action plan which involves barring Nepali citizens from entering the country from their foreign labor destinations. This sounded a slow clap as this is the same government which broadcast Public Service Announcements (PSAs) to discourage people from taking up foreign employment so that they do not experience exploitation and misery in the foreign land. Now the move to bar them from coming back to their own country demonstrates the terrible sense of irresponsibility and a grotesque failure of the government.

Nepal being the third top remittance-recipient country in terms of the remittance to GDP ratio and almost every other household having at least a member working abroad reflects how heavily reliant the country is on the well-to-go situations for these migrant workers and their host countries. With the worsening state of the pandemic leading to slash remittances in the near future in a way to impact Nepal’s economy, family members are in panic about the health and safety of their loved ones residing in countries that are more at risk than their homes. Undeniably, the various costs this pandemic is embedded with have hardly any parallels in the history of labor migration. Nevertheless, the sporadic global events keep reminding us that the fate of these workers is prone to fragility the same as the country’s sources of foreign revenues. This global interaction can be shaped by reasons like COVID-19, geopolitics or the temperaments that brew up widely or sectorally.

Let me present a survey of some key events that have jeopardised the fate of migrant workers. COVID-19, which originally was a local issue for China, has now become a global scourge. As the world community strives to address this pandemic it adopts various measures of which isolationism is irrefutably the most practised. But for the majority of migrant workers who live in heavily crowded camps, isolationism is a luxury.

At this testing time it may sound cynical to bring attention to other issues of vulnerabilities that migrant workers and the foreign employment sector face, but still this is a right time to talk about this as the crisis exposes the core of the problem. The outbreak of the ‘Gulf War’ in 1990 led India’s policy makers to realise the ‘vulnerability of the around 1.5 million Indians working in the Middle East. So, to dissect a key question – can the crisis be construed as just an aberration and beyond human control and once things turn to normal all will be well – needs to be asked. A very blunt answer to that is a simple NO and it will be too optimistic to construe otherwise.

To get to the bottom of the precarity, let’s get into the history of how the very migratory trajectory evolved. Until the 1990s foreign employment for Nepal was largely limited to either Lahure army recruits or towards private or industrial jobs in Indian cities. In the 1990s the gulf sector opened up for Nepal, along with other Asian countries. This happened as a fallout of the Gulf war – between Iraq and Kuwait--in which Saudi Arabia sided with Kuwait and Yemen with Iraq. Saudi was a major destination for Yemeni migrant workers and this proxy war resulted in the expulsion of Yemeni workers by Saudi Arabia. Within a very short span of time, around two million Arab workers had to leave the countries that were either at war or were proxies. Yemenis worked and stayed in Saudi Arabia from the very beginning and even “contributed greatly to the prosperity of the country” while Saudis also acknowledge they “treated them as Saudis”. Yemenis in Saudi Arabia were essentially like Nepalis in India or Indians in Nepal minus lingual differences as Yemenis and Saudis largely speak similar dialects of the Arabic. Further, to avoid any potential risk of internal chaos from migrants of the region, the countries pursued policies that demanded workers who did not belong to the same cultural heritage as they could be treated distinctly as ‘others’. As it is said someone’s sacrifice is life to others, the demand for South Asian workers grew from there and Nepal became a beneficiary too.

Echos of what happened in the 1990s reverberated in 2017 as well when four GCC member countries put an embargo on Qatar, which continues till date. Even as the fate of 80% of the Qatari inhabitants – who happen to be migrant workers of one kind or the other – turned bleak immediately after the embargo, workers who hailed from Egypt were more vulnerable. Apprehensions and ‘panic’ were shared among the workers. Though no apparent official stand was taken to expel Egyptian workers from Qatar, in practice they were not welcome--their contracts did not get renewed. Once they had gone back home, labour permits were not issued to them again. This was easily perceived even by common Nepali workers. A migrant worker from my neighborhood who was sharing his experience of how Qatar is no longer a dependable country in terms of employment said his company, which had a majority of workers from Egypt just a few years back has none at the moment. For a perspective, in the embargo, Egypt sided with Saudi Arabia against Qatar. After two years of embargo, Qatar openly said it would not grant visas to “our enemies”.

It is not necessarily the case that a country has to be party in a geopolitical tussle to be affected. For instance, Malaysia is likely to “recruit Pakistani security guards”, a sector that has been “reserved for Nepali migrants”. Though no explicit reasons have been given for the change, the chronology is very telling. Malaysia protested India’s amended citizenship law which “discriminates Muslims” and the abrogation of Article 370 – a special right for Kashmir to certain privileges. New Delhi responded by cutting trade ties with Malaysia, for whom India was the biggest buyer of palm oil. This brought Pakistan into action as it was flagging those two issues on the global forums, and promised to extravagantly import palm oil from Malaysia in order to compensate for the loss caused by India’s ban. Malaysia thanked by promising to take 150,000 ‘security guards’ from Pakistan. The opportunity would otherwise have come to Nepal.

When we seek the answer of this precarity from globalisation and various institutional instruments in practice to administer its functionings we get to encounter conspicuous Uruguay Round of World Trade Organisation (WTO) that ensured a free flow of capital across the world but the mobility of unskilled labor was mandated to be checked. Capital flows matured over more than three decades while unskilled labor endured a fragile fate. The crisis of any kind exposes vulnerable migrant workers in the harshest way both in terms of immediate security as well as long-term employability. The countries that have abundant unskilled labor are threatened by precarities that are contingent to conditions of geopolitics, economic and other disasters hitting the labor recipient countries.

This is not the first time the Nepal government has come up with mechanisms to address such pressing issues. The larger effort of governing labor migration seems incoherent and lacks commitment from the government.

With the Nepal government seemingly intending to address the vulnerabilities of its migrant workers by trying to dissuade them from going into foreign employment through measures like Public Service Announcements, it must demonstrate that these efforts are genuine. As Nepal aspires to graduate from a ‘least developed country (LDC)’ to a ‘developing country by 2030’ it must adopt policies that are conducive to job creation. Just ‘wait and see’ and populist policies on the fate of migrant workers and remittance economy may eventually become a bane for the country, its people and economy.

Mohd Ayub  Ayub is a researcher based in Kathmandu.

In Saptari, four Madhesi protesters are killed by the police within 24 hours