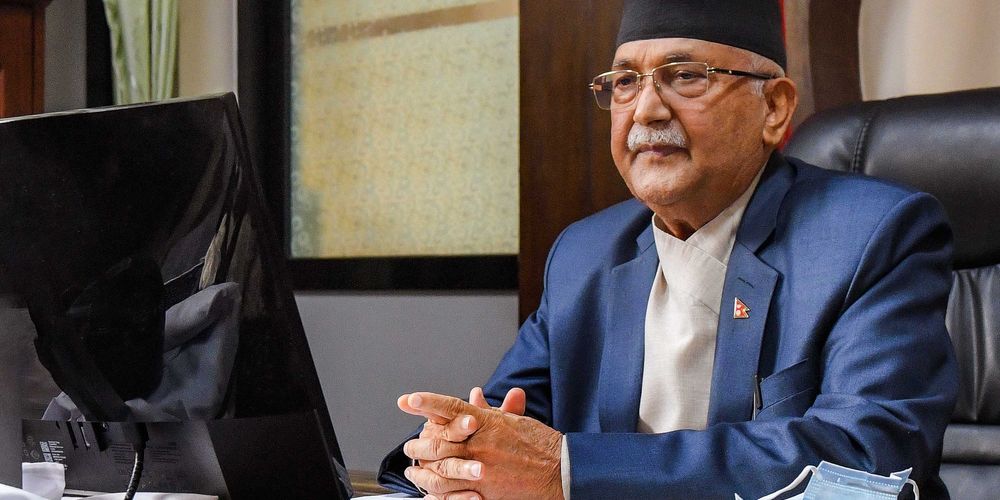 Even as Covid-19 cases spike, Nepali politics seems to be heading towards derailment. Prime Minister KP Sharma Oli has decided to seek a vote of confidence from the House on Monday, May 10, and though it seems like natural parliamentary practice, it is really the result of over a year-long feud among the ruling communist leadership.

Days after PM Oli announced that he would be seeking a confidence motion, his alliance partner Pushpa Kamal Dahal, chief of the Maoist Centre, announced that his party would be withdrawing its support of the government. The years-long rivalry between these two leaders will culminate in the floor test at the federal level, even though the crisis is already being felt at the provincial level, where both Dahal and Oli are working to unseat each other’s provincial premiers.

The ghosts of the past continue to haunt Nepal. Last year, when coronavirus cases first began to emerge, the political leadership was busy bickering over the post of prime minister. While political tussles over the premiership are nothing new in Nepal, the very fact that they continue to overshadow the acute health crisis where dozens of lives are being lost daily reflects the debasement of Nepali politics from the needs and welfare of the people.

Prime Minister Oli had appeared to be on the back foot after the Supreme Court, on February 23, held his December 20 dissolution of Parliament to be ultra vires and his rivals within the Nepal Communist Party, namely Dahal and Madhav Kumar Nepal, suspended him from the party leadership. But then, on March 7, the Supreme Court handed Oli a trump card by invalidating the formation of the Nepal Communist Party. The Court further ruled that two parties — CPN-UML and Maoist Center — that comprised the unified Nepal Communist Party would return to their separate states. Oli was then able to exercise his executive powers as chair of CPN-UML to systematically undermine his rivals, Madhav Nepal and Jhalanath Khanal, within the party structure while Dahal went back to chairing the Maoist Center. As no-confidence motions were tabled across the provincial parliaments to unseat the Maoist leadership, Oli’s rivals within the CPN-UML commanded their provincial legislators to cross the floor and save the Maoist-led government in Karnali province.

The foundational idea of the parliamentary form of governance is the legislature's oversight over the executive. However, Oli has consistently undermined the legislature and used his residuary powers to alter the power balance in favor of the executive. President Bidya Devi Bhandar even promulgated an ordinance on Oli’s recommendation to amend the Constitutional Council Act, making it easier for the prime minister to handpick members for constitutional bodies like the Election Commission and anti-graft bodies like the Commission for the Investigation of Abuse of Authority, overriding the legislative intent.

Furthermore, Oli is also using loopholes in the constitution to divide and weaken the opposition's arithmetic. Article 78 of the constitution allows for non-member(s) of the federal parliament to become ministers only for a limited timeframe, but by inducting seven non-members into his Cabinet, Oli is making a constitutional exception the norm.

Chief Ministers from the UML are also following similar practices to cling to power. In Gandaki Province, one member of the opposition went missing on the day of voting on the no-confidence motion. Later, news emerged that he had been ‘hospitalized’ due to Covid-19, but even that narrative is suspect. Subsequently, infamous mobster Rajiv Gurung, aka Deepak Manange, was appointed provincial minister for youth and sports.

Similarly, in Lumbini Province, Chief Minister Shankar Pokhrel resigned in one morning only to be sworn again in the evening despite not having the support of a majority of provincial assembly members. In Karnali Province, defectors from rival parties were made ministers after supporting the government to win the confidence motion, despite them being disqualified from the assembly.

Currently, the House of Representatives, the lower house of Parliament, has 271 members out of a total of 275 seats; of which, the UML has 121 members and the primary opposition Nepali Congress has 63, of which two are suspended; the Maoists have 53, of which four have been removed; the Janata Samajbadi Party has 34, of which two are suspended; the remaining three members are from fringe parties and one is an independent member. Oli needs 136 votes to pass the floor test, as per constitutional provisions. Presently, even if all the Members of Parliament from the UML vote for Oli, he will still be 15 votes short. Around 30 members of the 121 UML MPs are believed to be from the Madhav Nepal-Jhalanath Khanal camp. This seems like an uphill task for the prime minister, given the internal party dynamics and the external arithmetic.

Fearing the possibility of a floor-cross like in Karnali, the UML has asked 27 parliamentarians close to the rival Madhav Nepal faction for a clarification. Meanwhile, the Nepali Congress has publicly stated that it will work to defeat the confidence motion.

In the whole political jigsaw, the yet-undecided Janata Samajbadi Party has become the key decision-maker. But the party too is faced with an internal rift. It is vertically split into two equally powerful camps, one led by Baburam Bhattarai and Upendra Yadav who oppose Oli and the other by Mahanta Thakur and Rajendra Mahato who are open to supporting Oli.

This brings us to the question of why Oli is seeking a vote of confidence at a time when there has been a 137 percent rise in Covid-19 cases over the past week. Although all parties, including a majority of the ruling Nepal Communist Party, had opposed Oli’s dissolution of parliament in December, they have since failed to table a motion of no-confidence against him. Furthermore, Oli’s tussle with Agni Sapkota, the speaker of the House, has rendered the Lower House practically business-less. Amidst such a situation, Oli’s decision to seek a confidence vote is welcome, but was there a pressing need, given that the Maoists continue to support the government despite their public criticism of Oli?

Oli appears to have thought so, and now that the motion is imminent, there are just two possible scenarios — passing or failing.

Oli passing the confidence motion would put the opposition parties into further disarray. But for Oli to win, it is imperative that all his parliamentarians remain intact, including those from his rival factions. He will also need to divide the Janata Samajbadi Party and bring one faction over to his side. This would not only win him the vote but also tighten his hold on state institutions, which in turn would further entrench his power.

The confidence motion is also a litmus test for the Madhav Nepal faction as to whether they will remain in the UML or are willing to risk their legislative membership to defeat Oli. If Nepal falls in line with the party whip then Oli’s capture of the UML will be complete. If he does not, Oli will likely paint him as the bogeyman and penalize him.

Alternatively, in case the motion fails, then Oli will continue to function as a caretaker prime minister until a government is formed or new polls are held. Given the parliamentary arithmetic, the diverse parties with their intra-party conflicts, and the suspension and (potential) removal of parliamentarians, it appears unlikely that another government will be formed, in which case the country would be forced to go for snap polls under Oli’s leadership.

The Congress and its President Sher Bahadur Deuba are in favor of elections, believing that it is easier for the party to win at a time when the communist parties are in disarray. Oli on the other hand thinks his nationalist plank and infrastructure push in the villages will be enough.

To paraphrase former British prime minister Harold Wilson, even a day is a long time in Nepali politics. So, on May 10, when the confidence motion is tabled, it would not be surprising to witness unforeseen permutations and alliances.

Given the current infighting, potential party splits, and horsetrading, going for a fresh mandate is definitely a better option. However, free and fair elections under the current leadership which has actively undermined the legislature and iron-fisted its way in the party could be problematic. Even if Oli takes the nation to elections, given his track record, he could very well use the pandemic as an excuse to prolong his tenure and postpone elections indefinitely. At a time when Covid cases are rising and the country is facing an imminent health crisis, it would also be irresponsible to expose millions of citizens to the virus. Therefore, the current crises have left Nepal and the political leadership, except for Oli, between a rock and a hard place.