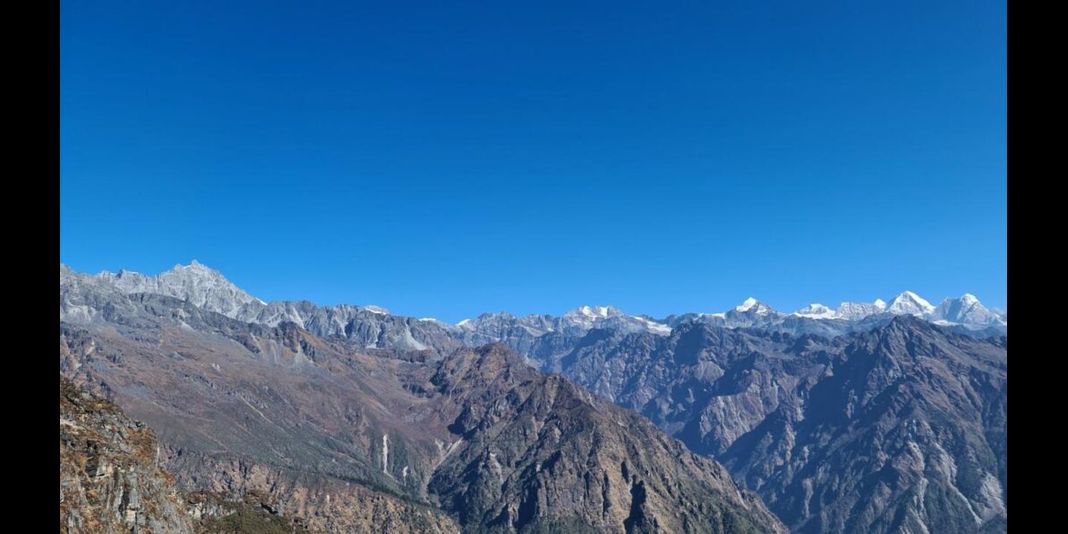 Shortly after he was elected chairman of Dharche Rural Municipality three years ago, Santa Bahadur (Santosh) Gurung promised to develop the rural municipality in the northern region of Gorkha, bordering China, into a beautiful, safe, and prosperous municipality. To manifest his vision, he came up with a slogan around which he rallied his constituents: mera lagi paryatan, paryatan ka lagi ma (Tourism for Me, I for Tourism).

But how did Gurung implement his poll promises in practice?

Remote Dharche is the gateway to two popular mountaineering destinations — Manaslu and Ganesh Himal — and Rubina-La Glacial Lake. The municipality lacks swathes of level land for farming, and with many settlements built into its rugged terrain, which was devastated in the 2015 earthquakes, there is barely any prime area left for setting up industries that can lead to job creation. With no other suitable option to work with, Gurung expanded the tourism infrastructure at the community level, with the aim of converting the rural municipality into a prosperous tourist hub.

Under Gurung’s leadership, Dharche has created the infrastructure for hosting several activities such as paragliding, canyoning, rock climbing, rafting, and cycling. The municipality, which is home to more than half a dozen Everesters, has now set an example for how other local governments can pivot to focusing on tourism — a strategy rarely implemented at the local level.

Under the guidance of its Everest climbers, Dharche has constructed the requisite infrastructure for the promotion of all types of tourism activities — adventure tourism, community tourism, and agrotourism.

Fulmaya Gurung, vice-chairperson of the municipality, says their focus on tourism has made Dharche a model rural municipality in Gorkha. “Nature has gifted us with a tourism-friendly landscape. Most people living here are reliant on businesses based on tourism,” says Fulmaya. “That’s why we are devoting ourselves to welcoming domestic and foreign tourists.”

To attract tourists, Dharche has constructed a 17km scenic cycle trail starting from Barpak, the epicentre of the 2015 earthquakes, and ending in Machchhikhola. According to Gurung, homestays and hotels are being constructed along the cycle trail, which boasts breathtaking views and is even being used as a foot trail. Dharche further offers rafting and fishing facilities in the Machhchhikhola area, where tourists can raft from Pralhadkhola to Nyauli Jharana of the Budhi Gandaki and fish in the nearby stream.

The municipality has also built the infrastructure for other adventure sports like canyoning and rock climbing around Nyauli Waterfall. Preparations to help enable paragliders from Laprak Hill to land in Machchikhola are now in the final stages. Dharche has completed all preparations to operate paragliding, save for obtaining the final permission from the Civil Aviation Authority of Nepal. Paragliding pilots trained by the municipality have already conducted successful test flights.

“Local tourism entrepreneurs will be allowed to run rafting, canyoning, and rock climbing services. In turn, the municipality will collect royalty from them,” says chairperson Gurung. “Dharche has footed half of the total expenses incurred in the training of local male and female guides, following which they can pursue a career in adventure tourism.”

The municipality has also developed a curriculum on tourism and mountaineering studies, in collaboration with the Nepal Mountaineering Academy. The course is currently being offered in Laprak School, where 45 high school students are studying it as an optional subject.

Furthermore, of the 573 houses constructed by the Non-Resident Nepal Association for Laprak’s earthquake survivors, the municipality is developing 250 houses as community homestays. It has also allocated NRs 1.5 million to build a 1km-long zipline from Laprak Hill to the settlement. The municipality has also been conducting a feasibility study on skiing’s potential in Laprak during winter, according to Gurung.

Gurung says the plan has been carefully studied, and the manpower required to operate the aforementioned tourism sports has already been selected and trained.

“We are working to promote tourism across our area, enhance the livelihoods of our locals, and achieve economic prosperity,” says local government chief Gurung. “We have categorised our landscape into three categories, in accordance with which we are promoting adventure tourism in the rugged terrain, cultural tourism in the settlements, and agrotourism in the lowlands.”

The municipality has also acquired 500 ropanis of cultivable land out of the total of 1,000 ropanis needed to kickstart cooperative coffee farming at altitudes below 1,500 metres.

Like Dharche, Helambu Rural Municipality, in Sindhupalchok, has also come up with a similarly ambitious tourism plan.

This fiscal year, convinced by the promise of the ambitious tourism plan put forth by the local government, the federal government’s Ministry of Culture, Tourism and Civil Aviation announced that it would allocate NRs 40,000,000 to complete the project. Last year, the Bagmati Provincial Government had allocated NRs 3,000,000 toward the same.

Nima Gyalzen Sherpa, chairperson of Helambu Rural Municipality, says the construction of the HGT could be completed within a year if an adequate budget could be arranged for. About 200 local workers have been employed in the project since construction of the trail began last year. That said, the work has been slowed down by the Covid-19 crisis.

“Domestic and foreign tourists have already started to flock to the HGT, even though we have not finished work on the project,” says chairperson Sherpa. “Helambu will see throngs of tourists soon.”

The rural municipality has also constructed bungee jumping facilities by erecting a 370m long, 173m tall bridge over a gorge. The local government has also successfully conducted paraglider test flights from Ghopte Ghyang, which is situated at an altitude of 2,200 metres.

Locals believe Helambu, which is also the source of the Melamchi Drinking Water Project, will grow as a tourism hub shortly after its tourism-related projects are completed and homestays and hotels are in place along its trekking routes. They are hopeful about luring trekkers visiting Langtang and sending them back to Kathmandu via Helambu.

“Tourism will boom in our area if we are successful in attracting tourists visiting Langtang and taking them to the unexplored tourist destinations in our area,  like Paanchpokhari and Helambu, before they return to Kathmandu,” says Pemba Chhyap Sherpa, a hotelier in Kusangtang of Sindhupalchok. “If the trekking routes are in good condition and the hotel facilities are in place, trekkers can go to Langtang from here too.”

Madi Rural Municipality in Kaski is yet another local government that has prioritised tourism as its topmost agenda for local development. The rural municipality has constructed a trekking trail connecting Sikles to Manang via Thulek, Thurchu, Dudhpokhari Kunda, Namang Pass and Timang. Tony Hagen, the famed geologist, had reportedly trekked this route in 1950.

The trail had been disappearing in recent years, until the local government repaired the route and branded it as the Tony Hagen Trekking Trail. They are hopeful that it will attract more trekkers after the work on the route is completed, even though the flow of tourists has significantly dropped in recent months owing to Covid.

According to Bed Bahadur Gurung, chairperson of Madi Rural Municipality, during the pandemic, 100 workers worked for 45 days after the Nepal Tourism Board and the United Nations Development Program Nepal provided NRs 5,000,000 to repair the trail.

“We will focus on creating publicity for it once the foot trail gets fully constructed,” says Bed Bahadur Gurung.

Earlier, Madi, which borders Manang and Lamjung, wasn’t able to sell its tourism destination even when other local governments along the Annapurna trekking circuit, such as Machhapurche, have been successful in their tourism promotions. Encouraged by the progress made by neighbouring local governments, Madi started the construction of the Tony Hagen Trail and other auxiliary trails, hotels, and homestays.

Under this trail-construction campaign, the rural municipality has also constructed various campsites and another foot trail that helps connect Sikles with Thangching and Kapuje Glacial Lake. The lake has long attracted trekkers as it is the best location for viewing Mount Annapurna (including the avalanches that occur on its slopes). Earlier, however, tourists were unable to reach the viewpoint owing to a lack of road access.

According to the constitution, local governments are independent in the new federal set up--so they now have the mandate to prioritise tourism promotions while also formulating annual policies and budgets. Some local governments, especially those in the mountainous regions with high tourism potential, have been focusing on creating policies for promoting tourism when planning their budgets. Some of these municipalities like Dharche, Helambu, and Madi, are already implementing their policies in practice.

But these municipalities represent the exceptions, rather the rule. Kul Bahadur Gurung, general secretary at the Nepal Mountaineering Association, says that even though tourism-related industries contribute nearly seven percent to the national GDP, except for a few local governments, many are still failing to introduce plans to sell local tourism.

“Save for a few local representatives, many don’t understand tourism’s potential. It would do local governments a lot of good--mainly those from mountainous regions with a high potential for tourism--to work on promoting tourism,” says general secretary Gurung.

(This report was produced in collaboration with the Center for Investigative Journalism-Nepal.)

The private sector can recover but for the entire tourism industry to bounce back, governmental interventions are necessary, say entrepreneurs.