Rupak Darshan travels the streets of Kathmandu every day, feeding hundreds of dogs, all out of a love for these animals and a desire to lessen their suffering. 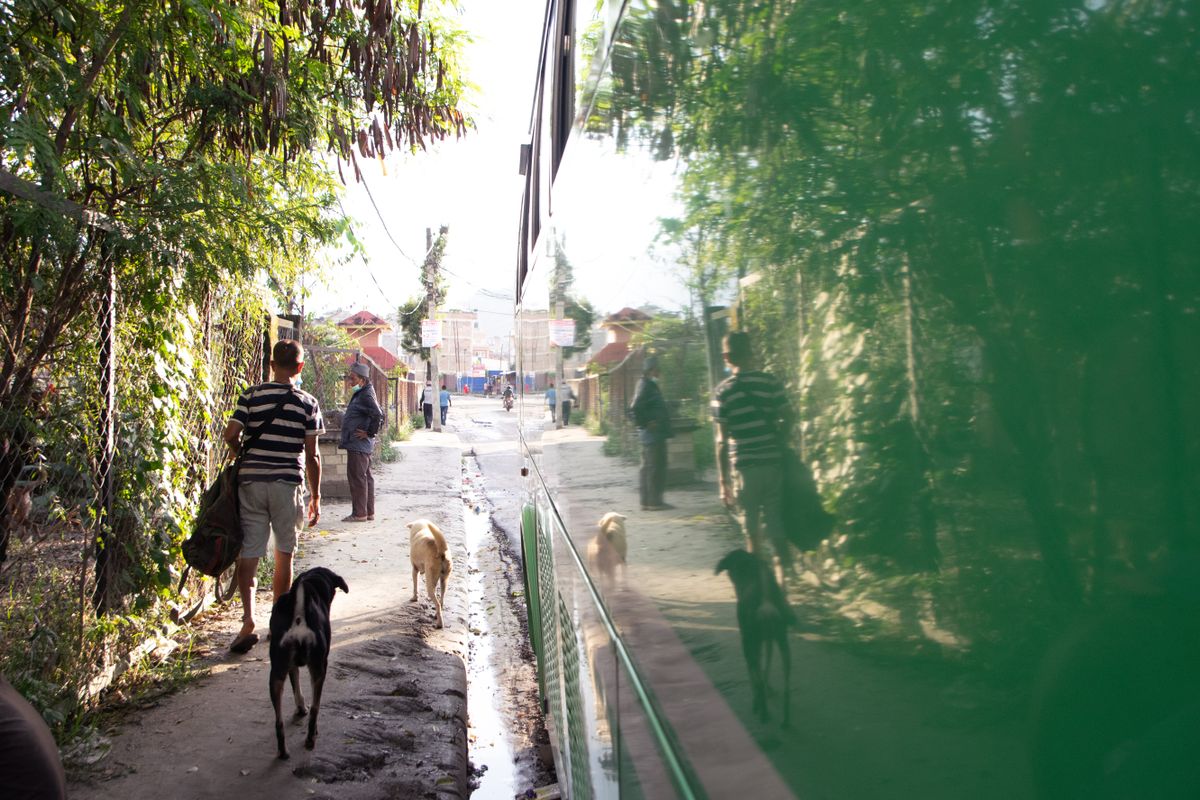 Every morning, Rupak Darshan leaves his home in Kwahiti in central Kathmandu with his two dogs. He makes his way to Hanuman Dhoka in New Road, looking for any street dogs that might’ve been injured. If he finds any, he treats them with simple medication. Then, he goes to the Valley Cold Store where the owners know him very well. He purchases chicken bones, wings, and liver in bulk, 10 to 20 kilograms, for about Rs 1,500 to Rs 2000, that he puts into a large duffel bag. From a nearby shop, he also buys packets of biscuits.

Throughout the day, Darshan, a 51-year-old with a serious manner, feeds street dogs around the city. He usually begins from Balaju and ends back at the Basantapur area, visiting areas like Banasthali, Shova Bhagwati, Naya Bazaar, Sorakhutte, Paknajol, Lainchaur, Kalimati, Dallu, and Durbar Marg. Most days, he follows the road alongside the Bishnumati river but sometimes, he will make sure to take different routes so that he can feed the dogs there. He usually reaches home after midnight, at around 1 am.

“These dogs are my only family. I find happiness in the small moments of feeding them,” says Darshan.

Darshan is a serious man, average-sized with a small mustache. But whenever he encounters dogs, his entire demeanor seems to change. He greets all of the dogs that he feeds as if they were old friends.

Darshan has had a hard life, so he understands the plight of the dogs, he says. He sold newspapers for about 15 years of his life after being unable to complete his higher education due to family issues. There was a time when he was separated from his family and struggled to make ends meet in Kathmandu.

“I hope no one suffers through situations that I have been through,” he says. “Only a person who has faced such difficulties will truly know how it feels.”

Darshan depends on donations to continue his feeding. Although he doesn’t actively seek donations or publicity, many locals have seen his actions and they chip in to help his efforts. When donations are low, he works odd jobs to collect the funds. At one point, he sold electronics around town to raise money.

Darshan loves all animals, but he despises people who use him and his animals for publicity and to make some money, something that has happened in the past, he says. People have used him and his daily ritual to raise funds that he never saw a rupee of. The experience has left him bitter and he hesitates to work with any animal welfare organization.

Kathmandu Metropolitan City had launched a project named Manumitra in March 2016 that used humane dog-catching methods to sterilize and vaccinate street dogs over a period of three years.

“It was a great program but with the end of the program, the population of dogs is increasing once again in Kathmandu,” says Darshan.

More recently, he was even approached by vets who wanted to treat the street dogs but like many others, they eventually backed out and nothing ever came of the offer.

“There are only a few people who really want to help these animals,” he says. “Most are just here for publicity.”

Darshan says that he will continue to feed street dogs as long as he can afford it and as long as he remains in good health. He does not have a lot of money left, he says, and he is afraid that he won’t be able to continue feeding the dogs for much longer.

The lockdown was especially tough as he had to obtain Rs 4,000 every day to continue feeding dogs. Valley Cold Store was closed due to the lockdown and he was forced to purchase meat at higher rates from other shops. But Darshan believes in good karma and truly hopes that one day, Nepali society will treat these street dogs better.

“I cannot stand seeing these animals suffering in the streets,” he says.

Luja Manandhar  Luja Manandhar is a freelance photographer with a keen interest in learning and sharing stories of the people he meets in his daily life and work.