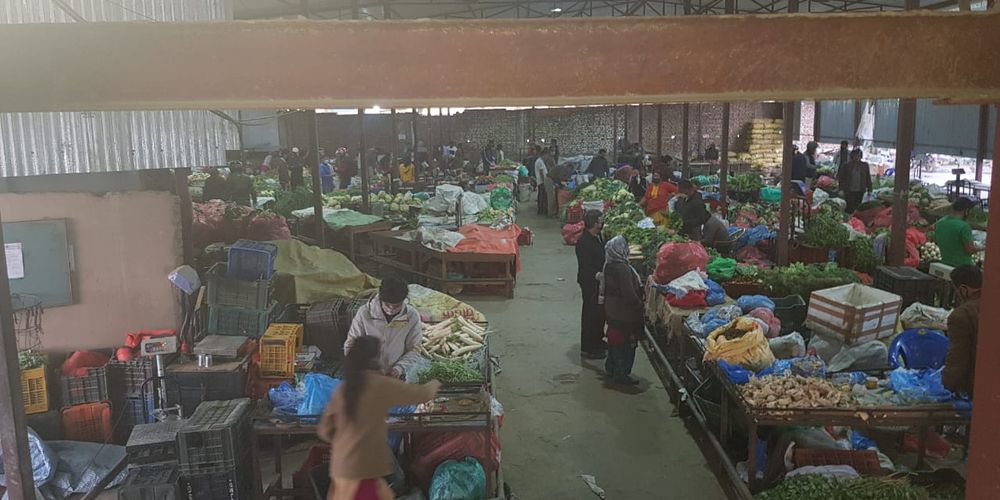 (Vegetable market at Tinkune on Saturday evening/ The Record)

The government has extended the nationwide lockdown until 7 April while authorities are still struggling to track co-passengers from the same flights as the four people who tested positive for Covid19 last week.

On 24 March, the government enforced a nationwide lockdown, invoking the Infectious Disease Act which allows authorities to imprison people defying public restrictions. Anyone caught violating these newly enforced restrictions can face a fine of Rs 100, upto one month imprisonment, or both.

The purchase of Covid19 kits, medical gears and masks from China through the fasttrack process has come into controversy amid media reports that the government was ready to pay much more than the authorized price for nearly all items.

Hamrakura, an online news portal, alleged that there has been policy-level corruption in the procurement process, saying the Ministry of Health and Population had sanctioned up to five times the actual price for some medical gears through the Kathmandu-based firms Hospitech Enterprises and Biomed International. It also alleged health minister Bhanu Bhakta Dhakal of sidelining offers of several other companies ready to deliver the goods at a much lower price. The government has refuted allegations, accusing some media outlets of trying to stir up controversy by spreading lies. In a statement issued by the MoHP, spokesperson Bikash Devkota said that the two firms had been awarded the contract after the ministry did not receive bids from any other firm.

Details remain unclear but a Nepal Airlines airplane carrying some of the purchased gear, including PPE and some kits donated by Chinese authorities, has arrived at TIA today. In a tweet, Chinese ambassador Hau Yanqi said on 29 March that “the first batch of emergency epidemic prevention materials including masks donated by Jack Ma Foundation and Alibaba Foundation will also arrive on the same flight. Others like testing kits are coming soon!” 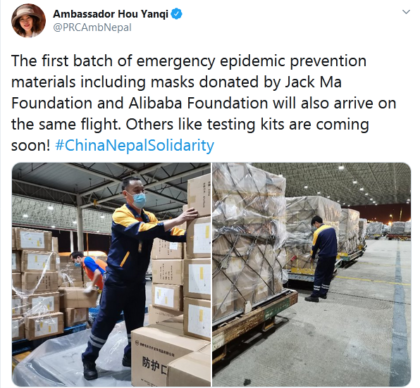 Succour for businesses and people hit by Covid19

The government is working to unveil a package targeting the poor as well as businesses affected by the Covid19 pandemic. Minister for Culture, Tourism and Civil Aviation, Yogesh Bhattarai, said that a high level task force was meeting later on Sunday, 29 March, to flesh out details of the package. For weeks, the government has been seeking suggestions of stakeholders to formulate a relief package that would ease the effect of the global recession caused by Covid19. The coronavirus pandemic caused by the novel coronavirus has severely affected Nepal’s remittance economy, tourism and small businesses.

Early on Sunday, the Province 2 government announced provincial food programmes for menial laborers and the poor. Besides trade and business, the package would also target migrant workers. Bishnu Gaire, President of the Association of Foreign Employment Agencies, an umbrella association of manpower agencies, said that more than 40,000 Nepalis preparing to go to work at various work destinations have been languishing in Nepal due to the global lockdown.

On 25 March, the government decided to relax restrictions along the China border after our northern neighbour reported that it had contained the spread of Covid19. Three days after the government shut down borders with both India and China, a high level task force, chaired by deputy prime minister Ishwar Pokharel, decided to open entry points along the northern frontier to ensure supplies of essential goods and services. Public movement will still be restricted. Notwithstanding the decision, neither Rasuwagadi nor the Tatopani border have reported any vehicular movement as of Saturday, according to reports. The task force has meanwhile extended the ban on international flights till 15 April.

Prime minister KP Sharma Oli, who had to be rushed to the Cardiothoracic Vascular and Transplant Center late 26 March, is recovering well. Oli was taken to the hospital due to an unexplained rise in his heart rate. He was discharged on Friday evening after reports from medical tests did not show anything serious, Dr Arun Sayami, a doctor involved in his treatment, told the Record. Oli, a chronic kidney patient, had undergone his kidney transplant on 4 March. Earlier in the week, the PM faced criticism in the news after he was seen attending a cabinet meeting without wearing a face mask.

Foreign missions in Nepal have started to evacuate their citizens stuck in Nepal due to the Covid19 lockdown. More than 1,400 tourists have been evacuated through chartered flights since Friday, while thousands others are being taken home later this week. Western missions in Kathmandu have been urging their citizens to utilize this opportunity after the Nepal government agreed to their request to allow evacuations amid suspension of international flights. Dhananjay Regmi, CEO of Nepal Tourism Board, the agency facilitating the repatriation process in coordination with other stakeholders, said that more than 1,000 tourists from various parts of the country have already been brought to Kathmandu. He added that there could be approximately 8,000 tourists who are currently stranded in Nepal due to the ban.

Getting to know the two young independents running for Kathmandu mayor

Balen Shah and Sunita Dangol are both first-time candidates running independently for mayor of the capital city. What is their vision and what are their plans?