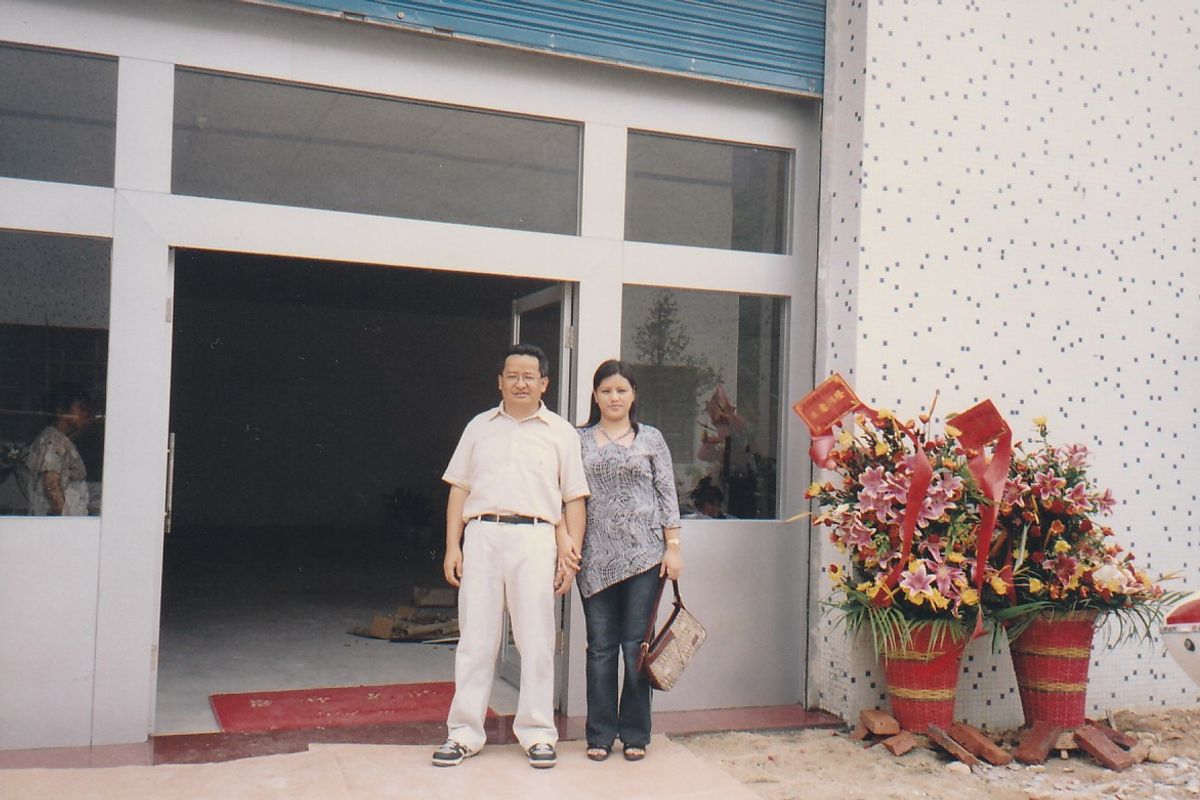 Tim Gurung and his wife in China during the opening of a new factory. (All photos: Tim Gurung)

This is part 5 in a series by Tim Gurung about his life as a Gurkha soldier-turned-businessman-turned-writer. Previous entries in the series can be found here.

Life would be boring without its share of ups and downs, and business is no different. I had my share of failures and successes in business, and I am sharing them with a smile on my face. Luckily for me, most of my troubles were caused by circumstances I had no control over.

My first big test as a businessman came in 2003 when Hong Kong was struck by a mysterious virus that overwhelmed the city with unprecedented fear and uncertainty. Nobody knew for sure what had happened, but everyone was afraid to come to Hong Kong and China. A black cloud of uncertainty hovered above us. The first to tumble was the stock market, which hates uncertainty. After tourists stopped coming to Hong Kong, business at hotels, shopping malls, and the service industry dried up. The property market took a nose-dive too, causing difficulties for many unfortunates. The epidemic, later identified as SARS (Severe Acute Respiratory Syndrome), lasted from March to June 2003, but Hong Kong's economy took a very long time to recover. The effects it had on us were severe and we all suffered.

Bankruptcy is another problem that is almost unavoidable in business but it is also very difficult and painful. I had to deal with at least five bankruptcies in my business career; we always ended up losing big each time. It wasn’t that my business went bankrupt but my regular customers – two from the UK, two from Germany, and one from Austria – did, often in the middle of a business transaction. On one occasion, we received cancellation orders when the goods had already been produced.

In a contrasting case, we needed to offer a discount just to get the goods accepted by its administrator. In two other circumstances, we had to sell goods at a 50 percent discount to a third buyer. We suffered a default on the last case and lost a considerable amount of money that took years for us to recover. But the lesson I learned from those experiences was crucial. In business, it's not always your fault, no matter how careful you are. Problems created by others can also burn you.

By late 2000, the business environments in China had drastically changed. The tried-and-tested methods we had applied hitherto weren't working anymore. We had to change the way we had been doing business if we were to survive. The Chinese had a particular way of doing business. If they saw anyone doing well, they all tried to copy him in the village, and it wasn't difficult to find that out. Whenever they saw trucks and people coming in and out of someone's place, everyone in the village took notice, and the villagers didn't rest until they found out what that someone was up to, even if they had to bribe a worker. Before long, everybody in the village sold the same type of products. Everything would go well until a drawback would eventually catch up and punish everyone involved.

Since everyone produced the same product in the same way, the only way to differentiate them was the price, causing a price war that would benefit no one. Over time, the price war became so intense that hardly anyone could make a profit. We were victims and experienced the tragedy firsthand. We used to sell a 60cm diameter white marble table with cast iron legs at $25 in the early 2000s; the price had come down to $7 by the end of the 2000s. Before long, the product itself was killed off and never produced again.

It was a cutthroat world, and we had to always be on our toes if we wanted to survive. Besides, Chinese manufacturers had government subsidies, tax returns, and favorable exchange rates that we didn't enjoy as outsiders.

Offering the whole package to our overseas customers had already run its course by that time. Buyers preferred to visit the factories themselves and see how goods were made before deciding on what to purchase. Buying directly from factories made sense, for they could get a better price and exercise more control. We suddenly found ourselves in a situation where we had to either sink or swim. That was when I made one of the most complex decisions of my business life.

We dropped everything and concentrated on only one product – table bases. By offering only one line of products to our customers, I felt vulnerable but persisted. It took some years before the results came in, and they happened to be positive. We survived and flourished, becoming one of the leading table base manufacturers in southern China.

By 2014, I was doing pretty well in both my business and private life. But I heard an awakening call and felt like I had been sleeping for a very long time. I realized that I had been working my entire life and suddenly felt exhausted. After all, I had begun working when I was 17, and I was almost 50 then. I could not go on working for the rest of my life. I thought: what about my happiness? I wasn't here to just pay the bills. I needed to do something meaningful that would make me happy.

I didn't have to look for too long as the answer was already there. Both of my children had already graduated and my wife had always supported me through both thick and thin. We held a family meeting and decided then and there that my son would take over the family business. I decided that I would become a writer.

Since I had no experience in the writing field, I started from scratch and found the task pretty interesting. If you are not embarrassed to call yourself a writer, writing should be the easiest part, as you will have many other problems to deal with regularly. I never had any issues with writing, although whether it was good or bad writing is an entirely different story. Many writers can write; I have no doubts whatsoever about that. But they don't get to the point where they should be for many reasons. Media exposure, validation, popularity, word of mouth, opportunity, and luck, to name a few, are necessary, but writers must also work hard, dedicate themselves to the craft, and persevere if they want to be successful. Unless you are a celebrity, a British Royal, or a former US president, you must toil on. There is simply no alternative.

I wasn't disheartened, for I knew my position, had no big dreams, and promised myself to do my best and be happy with that. Unlike many struggling writers, I had no pressure to earn a living out of my writing; my family wouldn't go hungry without me and I had to prove nothing to anybody. That was a significant relief, and it made all the difference in pursuing my new dream of becoming a writer.

The initial steps of my journey felt like entering into a thick and mysterious jungle, where I had to tread cautiously, one step at a time, and make my way as firmly as possible. For the next three years, I ate, drank, breathed, and slept books, learning the trade, making numerous mistakes, and leaving a tiny mark of my own. I made slow progress. I didn't sell a ton of books or make a splash on mainstream newspapers. I was not even close to becoming a bestselling author but I was happy. I had already come a pretty long way since I had started as a writer.

But then, something unfortunate happened to me – not once, twice, but three times. These incidents changed my writing career once and for all. I will explain just what happened in the next part of this series. Thank you for reading.

Sujeev Shakya: 'Shakespeare can be found in the fields of the Himalayan hills'

This week on Writing Journeys, the writer and consultant Sujeev Shakya talks about the importance of listening in writing.

The joy of writing

This week, for Writing Journeys, series editor Tom Robertson asked contributors what they enjoy most about writing. Here are their answers.

With bold experimentations in mixed media and a continuing desire to learn and evolve, Sunita Maharjan is well on her way to becoming a pioneering Nepali artist.

Or, why I love vigorous verbs and why you should too