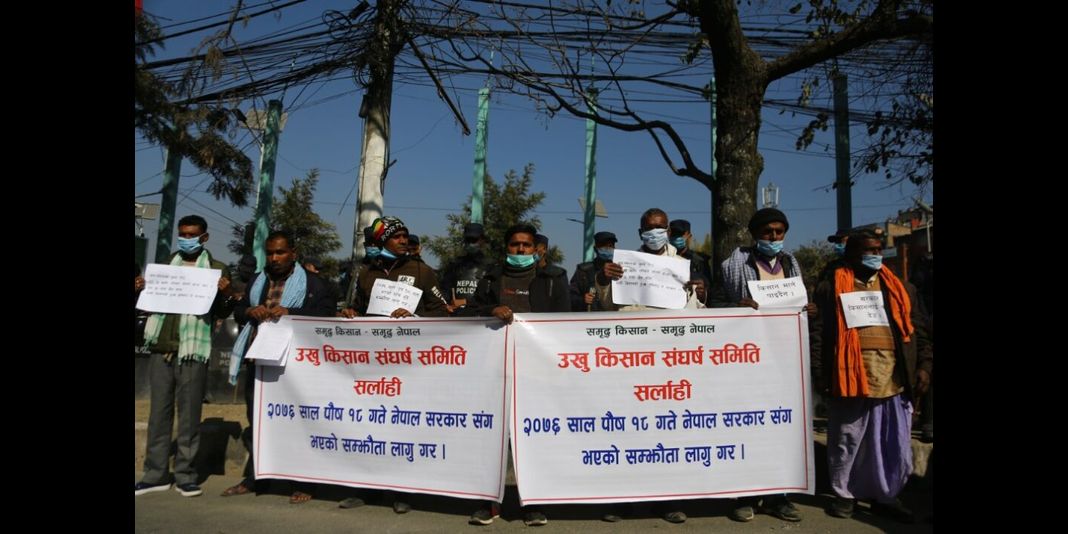 Had the government sincerely implemented the agreement signed with them last year, scores of sugarcane farmers in the southern plains would have been harvesting their sugarcane and attending to other household chores. Instead, they have gathered in Kathmandu to stage protests against sugar mills and the government.

These farmers have not been paid by the sugar mills for over seven years. The outstanding payments amount to around a billion rupees. Some of the sugar mills whose sugarcane was procured in the past have already shut down without the farmers seeing any of the money they were owed. The farmers had sought help from the government, but even though the ‘powerful communist’ government continued to make promises, they never dared to ask the industrialists to pay their dues.

Last January, the government had convinced the farmers to postpone their protests by promising them that it would talk to the defaulters and ensure payments to farmers within a month. It has been almost a year since that agreement was reached.

“Commerce Minister Lekh Raj Bhatta had told us that he would come wherever we want him to if he failed to make the mill owners pay up within a month,” said Maya Shankar Prasad Yadav, one of the delegates who had signed the agreement. “The agreement has not been implemented till date. Can you imagine the situation of the farmers, who have no source of income other than selling sugarcane, and who end up getting swindled by the mill owners?” says Yadav, who claims to have over NRs 800,000 owed to him by the mills.

The Covid-19 pandemic has multiplied their woes: the farmers could not procure chemical fertilisers, they could not work in the fields for months, and their income dried up as the informal sector and markets remained shut for months. The government, having failed to provide them fertilisers, promised to provide them relief. But the farmers' concerns still remain grossly ignored. “Just remaining alive right now is a big deal for us,” said Yadav.

To make matters worse, many farmers do not know how they will deal with the miseries that winter has brought. They know that the cold season is when the coronavirus can run rampant. But the government has not kept any figures for Covid-19 infected farmers and families. As it is, in the Terai, more people come down with  fevers, coughs, and colds during the winter. These are symptoms that Covid-19 infected people manifest too. But neither the federal nor the provincial governments have any plans to help the farmers combat the cold, even though public health experts have been warning of a potentially bleak winter.

“There are no check-ups, no record of Covid-19 infections,” said Yadav.

Then there is the problem to do with the lack of fertilisers. As part of a politically influenced deal, the government had awarded deals to Shailung Enterprises P. Ltd--owned by Sharada Prasad Adhikari, the landlord of the ruling Nepal Communsit Party’s executive chairman, Pushpa Kamal Dahal, and Honiko Multiple P. Ltd, owned by Humnath Adhikari, a Nepali Congress leader--to procure chemical fertilisers worth NRs 4 billion. But the companies failed to supply the fertilisers from India, even after the deadline given to them had expired.

The government scrapped the procurement deals signed with them around rice-harvesting time. Owing to these companies’ malfeasance, whose proprietors have deep political connections, millions of farmers faced a farming crisis last monsoon.

Desperate to keep their farms alive, many farmers snuck into India, risking their lives, to get their hands on fertilisers. The police in both Nepal and India harassed them for breaching the lockdown rules.

The mill operators have been getting away with swindling poor farmers largely due to their political connections. One of the sugar mill operators, the owner of Mahalaxmi Sugar Mill, is Province 5 Nepali Congress Parliament Party leader Birendra Kanaudiya. After the party pressured him, Kanaudiya paid NRs 120 million of his debt to farmers, but he is yet to pay the remaining NRs 60 million.

“More importantly, the mill owners have not settled their dues for seven years. No one cares about the farmers,” said Rakesh Mishra, who has been leading the peasant protest in Kathmandu.

According to Mishra, only NRs 250 million was settled last year. “Many farmers are getting a pittance for their sugarcane,” said Mishra, adding that sugarcane farmers from Sarlahi alone are waiting to get the NRs 260 million they are owed.

Read also: A future in farming

It’s shocking how the mills--and even the government--have been able to get away with such impunity. In January, while signing the agreement with the farmers, Industry, Commerce and Supplies minister Bhatta had stated that all the dues owed to the farmers would be settled by January 21. But very few farmers received the money they were owed, and the rest of their demands--related to concessional loans for farmers and easy availability of seeds and chemical fertilisers--still remain unaddressed.

The ministry, which had pledged it would address all the demands raised by the farmers, has instead completely disregarded them. Indeed, minister Bhatta in November said that the government couldn’t take action against the sugar mills (who have also not paid the salaries of their staff for months) for fear of losing foreign direct investment.

The noncompliance with past agreements, the lack of follow-up on the incentives that were promised to farmers, and the insensitive remarks made by the minister have forced the sugarcane farmers to finally rise up against the unfair treatment that is routinely meted out to them. That’s why they have traveled all the way to Kathmandu. It’s all they can do-- because for years now, after growing their sugarcane, and after they transport them to the nearby sugar mills, the most they can do is begin their interminable wait to get paid.

“The sugar mills sell one kg of sugar for 80 rupees, but we sell a quintal of sugar for 536 rupees,” said Mishra. “And yet, farmers don’t get paid for years. Isn’t that injustice?”

This time around, though, the farmers say they aren't in a mood to let the government off the hook without their years-long dues getting settled. They have erupted in no small part because with the Covid-19 crisis depleting their savings, their livelihoods are at stake--like never before.

Farmers, as is the case with other workers in the informal sector, have been disproportionately affected by the pandemic. The four-month nationwide lockdown and subsequent prohibitory orders forced them to dump their produce, especially items like milk and vegetables, which are produced exclusively for the local market. These losses amounted to over NRs 40 billion for Nepal’s agriculture sector.

Deceived by the government and gutted by the Covid-19 crisis, farmers say they won’t compromise this time around. They say they are ready to die on the streets of Kathmandu if their demands are not implemented.

“The farmers want a fair price and timely payment for their produce. All dues must be settled immediately. And concessional loans for farmers must be provided. We won’t return home if they merely offer us false pledges,” said Mishra.