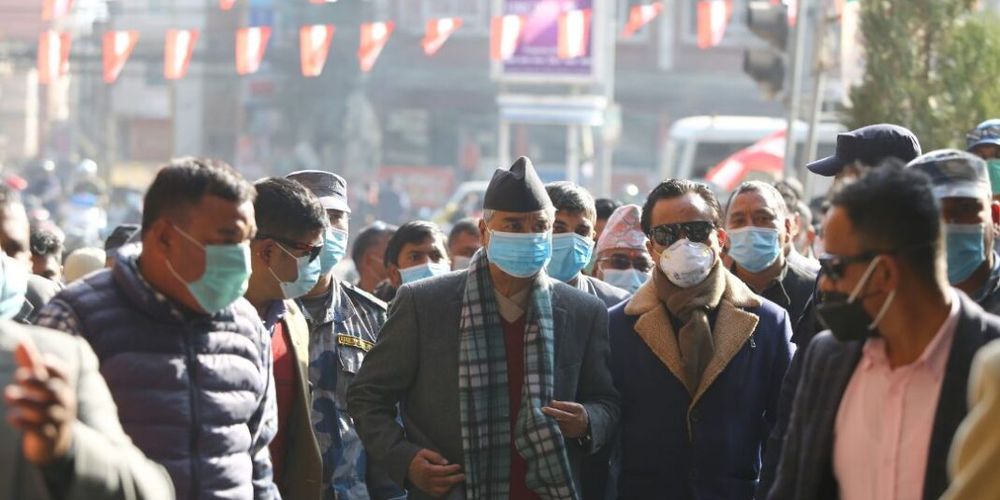 On Monday, members of the main opposition party, the Nepali Congress (NC), protested across the country against Prime Minister KP Oli’s ‘unconstitutional move’ to dissolve the Lower House of Parliament. Most Congress leaders stood against the move and have demanded that the disbanded House of Representatives be reinstated.

The breakaway faction of the ruling Nepal Communist Party (NCP) has been even sterner in its response. The rival faction, led by Pushpa Kamal Dahal ‘Prachanda’ and Madhav Kumar Nepal, says the polls won’t be conducted in the upcoming spring, as has been promised by Oli. They say Oli’s announcing an election is yet another ploy by him to prolong his stay in power. That’s why they are going at him hammer and tongs. They have been intensifying the nationwide protests against Oli’s move, demanding the revival of Parliament. And they have also demanded that both the prime minister and president be replaced once the House is revived.

But despite the growing protests against Oli’s undemocratic move, the main opposition leader, Sher Bahadur Deuba, still seems reluctant to call out Oli and join in the protests.

On Monday, at a protest programme in Bhaktapur, Deuba asked his party leaders and cadres to have patience until the court issued its ruling on the writ petitions that were recently filed against the dissolution of Parliament.

“Our party won’t put the court under pressure, nor will we issue threats to influence the court’s order,” said Deuba, addressing the rally. “Our party will accept whatever ruling the court comes up with.”

Deuba’s newborn respect for the Supreme Court is not consistent with his past actions. In 2017, the government led by Deuba, who has been prime minister on four occasions, tabled an impeachment motion against the then sitting Chief Justice, Sushila Karki. CJ Karki is known for her integrity and for her anti-corruption stance. But back then, Deuba’s government had filed an impeachment motion against CJ Karki because she had earlier, through an apex court order, foiled his plan to appoint Jaya Bahadur Chand as the Inspector General of the Nepal Police.

Read also: The deepening chaos within the NCP spreads from the centre to the periphery

In Monday's speech, Deuba reiterated that they should wait for the court’s verdict, a point he had earlier made before during his party’s central committee meeting. Many, including senior leaders from his party, have been wondering why Deuba has been stressing the need to wait for the court’s ruling, and why, unlike the other leaders, he has been reluctant to intensify protests against Oli.

Some party insiders indicate Deuba might be cooking up an alliance with Oli--to counter the anti-Oli faction within the NCP. They think that explains his sluggish response against Oli’s move. It’s also a response in keeping with the manner in which he has condoned Oli’s other recent proposals. Even as the faction led by Prachanda and Nepal refrained from attending the meetings of the Constitutional Council (the body responsible for appointing commissioners to constitutional bodies), through which Oli appointed 45 commissioners to 11 constitutional bodies, Deuba continued to attend them. In those meetings, along with other members of the council, Deuba played a major role in recommending retired police official Jaya Bahadur Chand as the Commissioner for the Commission for Investigation of Abuse of Authority.

Deuba’s support for Oli makes for a stark contrast to how the anti-Oli faction has responded to the PM’s recent moves. It was after all the faction, together with over a dozen advocates, who filed the writ petitions at the Supreme Court demanding an annulling of Oli’s decisions and the reviving of Parliament at the earliest. The faction, which has already filed a no-confidence motion against Oli, is determined to remove Oli from the government--on the grounds that he has acted against the spirit of the Constitution. (The Constitution does not allow for the dissolution of Parliament unless the House fails to produce a new prime minister or if a sitting prime minister fails to secure a vote of confidence in Parliament).

Their argument is warranted on several counts. PM Oli, who commanded a nearly two-thirds majority in Parliament, went against the Constitution when he abruptly dissolved the body. His proposal for dissolution was then swiftly endorsed by President Bidya Devi Bhandari. Before making the endorsement, President Bhandari, who is seen as a rubber stamp of the Oli administration, didn’t consult with the leaders of the ruling party, the main opposition parties, and civil society; nor did she wait 24 hours before endorsing the decision, in accordance with the Constitution.

Since Oli’s move to dissolve the House, the leaders of the ruling and opposition parties, civil society leaders, and experts from various sectors have taken to the streets, demanding the restoration of Parliament, which was dissolved nearly two years before the expiry of its mandated five-year term. Dismayed by the ‘unconstitutional’ and ‘undemocratic’ move adopted by PM Oli, which the protestors say is driven by Oli’s desperation to remain in power at any cost, disgruntled NCP leaders expelled Oli from the post of NCP chief and reshuffled the party organisation. For his part, Oli has formed a 1,199-member general convention organisation committee.

The split at the centre is also birthing fissures in the NCP across the country. The Prachanda-Nepal faction has filed a vote of no-confidence motion against its own chief ministers in Bagmati Province and Province No. 1, and the NCP’s disgruntled leaders have announced a nationwide protest for Tuesday. Seven ministers close to the Prachanda-Nepal faction have tendered their resignation. Oli, meanwhile, has amped up the rhetoric, vowing to counter every step taken against him, saying he will never bow down before his rival party leaders. Going against the spirit of the Constitution, the prime minister--who legal experts say is now leading the government in the capacity of a caretaker--recently inducted nine more ministers and reshuffled the Cabinet.

On Monday, Oli’s decision to appoint the ministers was challenged at the Supreme Court. But even as all the political forces are aligning to push back against Oli’s undemocratic moves, Deuba, the main opposition leader, has been leaning towards Oli.

The reasons behind Deuba’s reluctance to go full-throttle against Oli will perhaps become clear in the days to come. But leaders from Deuba’s own party warn that Oli’s moves will only lead the country towards totalitarianism and that the country could become a pawn of foreign forces.

NC leader Shekhar Koirala has been speaking out against the growing influence of foreign actors in Nepal, especially in light of the recent visit by the high-level delegation led by Guo Yezhou, the Vice-Minister of the International Department of the Communist Party of China. Guo has been holding a series of meetings with Nepal’s top leaders, ranging from the President to leaders of the main parties. And media reports state that Oli himself is mulling over visiting India in the near future.

“If Deuba doesn’t firmly stand against Oli, Nepal could become a playground for foreigners,” said Koirala in an interview with ekagaj.com, as he urged Deuba to take a more proactive role in the anti-Oil protests.