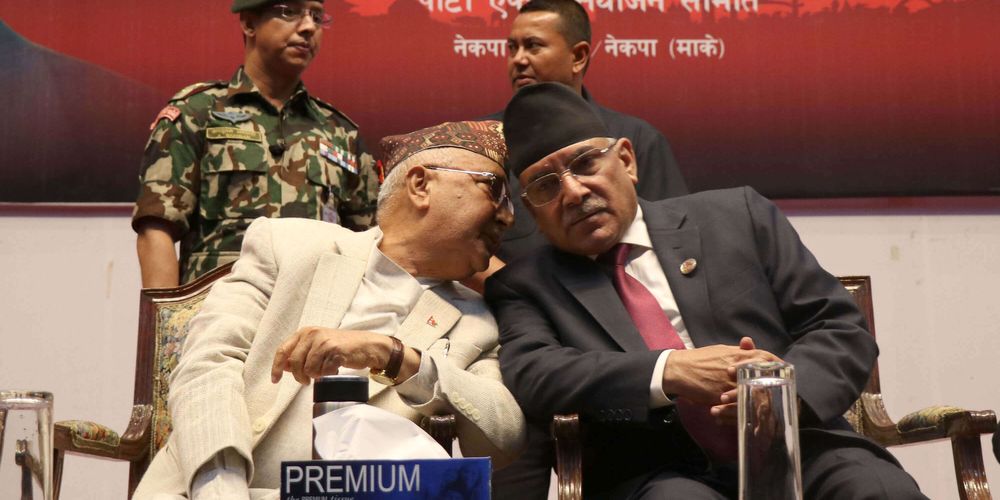 On June 6, the Election Commission granted legal status to the newly-formed  Nepal Communist Party (NCP) in spite of the party’s failure to fulfill the 33 percent minimum representation of women in its committees, as required by the law. The Commission, originally in favor of rejecting the application, was compelled register the party under pressure from the prime minister, one of the party’s co-chairs, and other powerful politicians including several former prime ministers, all of whom are Bahun men.

Article 15(4) of the Political Parties Registration Act clearly states that women must represent at least one third of the membership in all committees of a political party. Owing to the extraordinary situation of a merger between the two namesake communist parties — the UML and the Maoist Center —  that formed the NCP, the party declared its situation deserved exemption from the law. The EC granted exception on the grounds that NCP fulfill the 33 percent quota through its general convention election, to be held at a future date. The law in question, however, does not permit exceptions; therefore parties registered under such exceptions do not have legal standing and are are subject to the punitive measures outlined in the act, including monetary fines, expulsion from upcoming elections and disbandment. Consequently, in registering the party the Commission is also guilty of violating the law.

Ironically, as a party that commands a huge majority in the current parliament, the NCP is violating laws passed by its own members. The same parliamentary majority enables the party to amend laws according to the needs of their time. In spite of their access to such a legal avenue, NCP resorted to the crude bullying of Election Commissioners, undermining rule of law in the country. In this same collusion, the Election Commission is exposed as a political tool that safeguards interests of the ruling party rather than the law. In spite of being a constitutional body, the Commission has violated the spirit of our constitution, one that firmly upholds inclusion as its foundational principle.

NCP resorted to the crude bullying of Election Commissioners, undermining rule of law in the country.

Such a collusion between NCP and EC to deny women their place in leadership discredits the labor and life women have devoted to the nation-building project. In absolute numbers, there are zero women in NCP’s nine member secretariat, co-chaired by Pushpa Kamal Dahal and current Prime Minister KP Oli. Only 2 women are in its 45 member Standing Committee and 72 women in its 441 member Central Committee, a mere 16 percent and about half the required minimum. Historically even, neither UML nor Maoist Center have ever granted women proportional representation in all their committees, rendering suspect the credibility of NCP’s claims it will become inclusive in the future. Moreover, the Party Unification Coordination Committee and other task forces formed before the merger which helped determine the party’s current membership were also comprised entirely of men. In the Election Commission itself, only 1 out of 5 Commissioners is a woman. These are the exclusive institutions that have ensured and excused the marginalization of women in NCP.

The NCP is not alone in structurally excluding women. According to Commissioner Narendra Dahal, most parties registered with the Election Commission do not currently fulfill the representation quota. Recently, the Commission also registered RJP-N and RPP without sufficient representation, raising questions over the Commission’s integrity, transparency and accountability in the absence of public scrutiny. The four major parties in Nepal’s parliament, the Nepal Communist Party, Nepali Congress, RJP-N and FSF currently have 16, 21, 16, and 10 percent women in their respective central committees.  Such a prevalent male majority across the political spectrum indicates that the marginalization of women in politics is in fact a deep seated norm, not a circumstantial exception.

Dissent from within the NCP against the possibility of registering the party without including women had emerged through Binda Pandey, a central committee member, and former speaker of the House, Onsari Gharti Magar. Pandey pressed the Commission against ruling in favor of her party until women were granted their legal and constitutional right. “There are only men in the core team for selection of central members,” Pandey told Setopati, “They are, therefore, not sensitive to the issue of one-third female representation. We cannot negotiate inside the party. We will, therefore, create pressure by speaking publicly. The EC should not register the party without one-third female representation.” It has to be noted that  Prime Minister Oli has made disparaging comments against outspoken women leaders, asking them to remain silent on the issue until after the general convention elections. His remarks, coming from the highest political office, exemplify a culture that attempts to silence women even as it co-opts their right to lead parties they were instrumental in forming and promoting.

The Commission has given all parties three months to comply with the law. Historical and current trends suggest that parties will continue to skirt the law, employ pressure tactics to force the government’s hand, and silence voices of dissent through the exercise of power, especially those of women. Yet, women have law and justice on their side, and their cause should triumph over the male chauvinistic politics of this day.

Shubhashree Basnyat  Shubhashree is an intern at The Record, and a rising senior at Williams College with majors in English and Gender Studies.