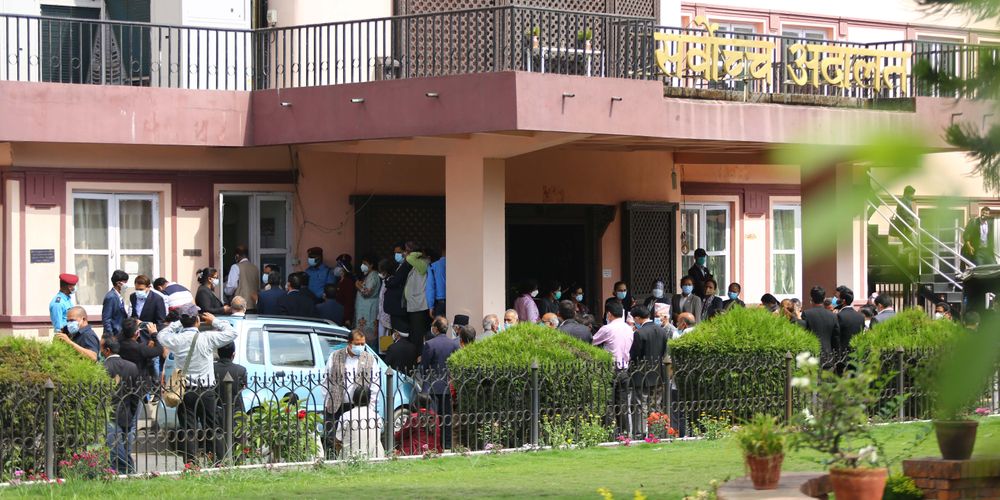 The second US President John Adams, who drafted The Massachusetts Constitution, the oldest active constitution in the world, envisioned “a government of laws and not of men”, by which he meant that law, and not personal whims, should be the mainstay of governance. Laws are above personal interests and have a social function. Notwithstanding the fact that their interpretations often depend on the aptitude and integrity of individual jurists, laws are known to establish the ethos of not just any individual but of society as a whole.

When individuals entrusted to uphold the laws bend or break the rules, the system is bound to fail. That is what President Bidya Devi Bhandari and former Prime Minister KP Sharma Oli did as they placed their personal interests above democratic norms. And they did so even as they justified their actions by interpreting various clauses of the constitution on their own terms. The relentlessness with which they assaulted the constitution is sickening. Rather than fulfil their duties as custodians of the constitution, Bhandari and Oli turned into predators.

But the Supreme Court, by invalidating the actions of the Bhandari-Oli duo and reinstating the House of Representatives that Oli dissolved twice within six months, has lived up to its social function. Constant assaults on the constitution were jeopardizing the law of the land and inviting a culture of impunity, giving way to wrongdoings. Such actions, instead of advancing state and society, forced them to retreat. That is why the court’s decision must be viewed not just as a legal decision, but essentially a moral one aimed at institutionalising -- and saving -- democracy.

On December 20, 2020, Oli suddenly dissolved the House and called for snap polls. But the Supreme Court overturned the dissolution on February 23, calling it unconstitutional. But Oli and Bhandari did not stop there. Consumed by hubris and completely bereft of morality and regard for the constitution, the co-conspirators, on May 22, dissolved the House for a second time in a brazen attempt to waylay democracy. Again, the Supreme Court reversed their decision and reinstated the House.

There have been other points in history too when Nepal’s judiciary has risen to the occasion. For instance, on December 15, 1960, Mahendra Shah dismissed the BP Koirala-led government and suspended Parliament. Koirala was jailed without trial until 1968, when he was allowed to go into exile in India. But on his return to Nepal in 1976, Koirala was charged with treason and sedition. The Panchayat government even wanted him hanged. But despite being under the autocratic Panchayat rule, a special court acquitted him of treason charges in a landmark decision.

This pattern of judicial activism reveals one thing: that our judiciary is not intimidated when it comes to imparting justice and upholding democratic values. On different occasions, the Supreme Court, along with other lower courts, has acted as the conscience of Nepali society, fighting on behalf of the people. It is the court's adherence to such an ethos that has enabled it to play its social function and help reinforce the importance of an independent judiciary among the citizenry.

Bhandari and Oli had been ushered to their positions as guardians of Nepal’s democratic institutions and traditions, such as rule of law, separation of powers, equal protection before the law, and civil liberties. Despite the push and pull of daily politics, they were expected to leave those instruments of democracy at least as strong as they found them. But they turned to the opposite direction, choosing instead to decimate democratic values and the constitution.

The constitution envisions a check-and-balance among the executive, legislative, and judiciary, helping them internalise the separation of power. The statute upholds the rule of law and places limits on the arbitrariness of power. As the supreme law of the land, it provides the standards that ordinary statutes have to comply with. It balances and reconciles legal, political, and social functions in different ways. Therefore, societal balance is built upon frameworks that ensure that no one institution has primacy over others. This allows for the management of contradictions and disagreements.

Central to maintaining that balance are the country’s courts. They must delicately consider the larger interests of the state and constitutionally protected freedoms that are occasionally disturbed by the state’s use or abuse of power. In this case, had the apex court not reinstated Parliament, it would have eschewed judicially manageable corrective measures, thereby maiming, and not just bruising, democracy in the process.

Perpetually enmeshed in political drama, we often forget to ask one simple yet normatively important question: what is the kind of society that we want? If promulgating or amending laws and appointing people to public office become pet projects of power-hungry politicians, then fairness, equity, and accountability will be in short supply. Perhaps, keeping this normative question in mind, the court acted as a conscience keeper, showing us where we as a society should be headed. Importantly, the court ensured that the people were not estranged anymore from democratic institutions.

At a time when the people’s frustration with the government had hit the roof thanks to Oli’s misadventures, the judiciary played a definitive role in reposing the people’s faith in the state’s institutions. Through its unequivocal ruling to save the constitution and the parliamentary process, the top court fulfilled its function of defining the limits of acceptable political action and the consequences of legal subterfuge. In other words, it has been able to transform the rule of law into a living reality.

Avasna Pandey  Avasna Pandey is the Program Manager at the Centre for Investigative Journalism-Nepal. She also teaches International Relations at Tribhuvan University.

The second wave is here and unless the government acts soon, Nepal will be in the midst of a public health disaster