Shallow fakes, where videos are edited to remove context andpresent statements in a different light, are just as dangerous as deep fakes. 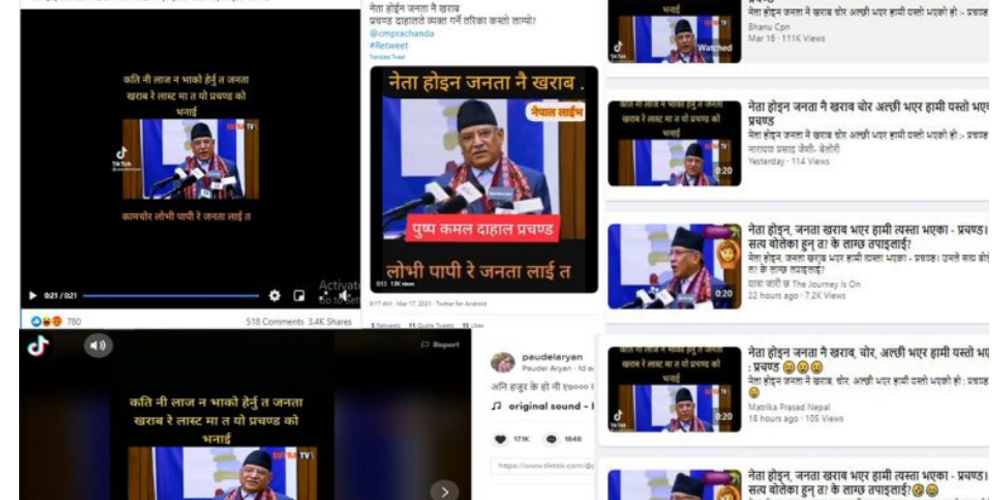 Earlier this year, in March, a video of former prime minister Pushpa Kamal Dahal went viral. In the 21-second video, Dahal can be heard saying that leaders are bad because the citizenry is bad.

“If you all become good, then leaders will have no option but to be good. But you are lazy, idlers, somewhat greedy, and more sinful, so your leaders became the same,” Dahal says in the video, which has since been shared more than 2,000 times and viewed more than 340,000 times, according to South Asia Check, a fact-checking website.

The video, however, has been selectively edited to remove all context and present a misleading picture of what Dahal had said. According to South Asia Check, a TikTok user had edited out the context in which Dahal had made his comment.

“All of you have heard of Lu Xun, the great poet. At that time, some people had developed a habit of criticizing politicians all the time. After hearing the criticisms, Lu Xun said that leaders are bad because the citizenry is bad,” Dahal had said right before the portion highlighted in the viral video. Dahal was effectively quoting Lu Xun and not making a statement of his own.

In an age of fake news and virality, this kind of content, where videos and pictures are selectively edited to alter the original meaning of the video, can spread quickly before they are exposed for being misleading. And the fact that these videos are not wholly fake but just taken out of context and only slightly edited makes them even more difficult to debunk. In countries in Nepal, where the technology to craft more sophisticated ‘deep fakes’ are harder to come by, it is these kinds of ‘shallow fakes’ that are becoming much more common.

“Nepali politicians are already notorious for making controversial statements, so the general public will seldom doubt if their statements are doctored to create controversy,” said Deepak Adhikari, editor of South Asia Check. “Edited videos will clearly misinform the public and this will further discredit them.”

Dahal’s video is not the only misleading clip that has gone viral in recent days. An altered video of Sujata Koirala, a central committee member of the Nepali Congress, was widely shared on social media in May 2020.

“In the video, which was also shared on TikTok, her statement was truncated and presented out of context. It was edited in such a way that she could be heard saying that Kalapani belonged to India. But she was merely repeating her statement, in which she had said Nepal could lease out Kalapani to India for 5-10 years because the country lacked access to the region. Different sections of a video were put together to show Koirala in a poor light,” said Adhikari.

Concerns over shallow fakes first came to prominence in the United States when a video of Nancy Pelosi, the speaker of the US House of Representatives, was edited to make it look like she was drunk by slowing down the original video. That video went viral on social media in May 2019 before it was identified as a shallow fake. This type of misrepresentation of politicians through shallow fakes can affect the integrity of elections, a major concern expressed by many global media pundits. The looming threat of shallow fakes in America is testament to why the Nepali public should also be vigilant of such deceptive content.

“We keep an eye on what kind of disinformation spreads on what platforms. People have embraced TikTok in Nepal. That may be the platform, like in India's case with WhatsApp, that could be a vector of misinformation in Nepal,” said Adhikari.

Shallow fakes have also contributed to the spread of misinformation during the pandemic. According to WHO, technology was not just used as a tool to disseminate informative news but also amplified misinformation.

According to South Asia Check, in one such case, shallow fakes of an already debunked debate between doctors in November 2020 was widely shared on Facebook during the height of the pandemic in Nepal. The 3-minute 21-second video was titled ‘Breaking News’ and claimed that WHO had retracted social distancing and quarantine guidelines. The caption that came in tow with the video also claimed that Covid-19 doesn't spread from one person to another.

Amidst rising concerns over the threat of AI-powered ‘deep fakes’ that can produce graphics and videos that are wholly new, the bulk of manipulated content that circulates on social media are just basic alterations and selective edits that can be done easily via social media apps themselves. Even though shallow fakes can be edited for satire or comedy, such videos can also mislead people.

South Asia Check has thus been providing fact-check reports in Nepal to counteract such shallow fakes and other forms of misinformation.

“For videos, we use a web-based application called InVid that turns the video into multiple keyframes. We conduct a Google reverse image search to track the images and find the source. Unlike fact-checking photos, debunking video is more technical. But a video is also more likely to go viral more than a post or a status,” Adhikari said.

Some other methods of fact-checking shallow fakes include scanning to see if the source is credible. In the case of Dahal’s viral video, a Sutra TV logo on the video led the team of fact-checkers at South Asia Check to YouTube, which turned up the full-length video.

But once such videos have been identified as false or misleading, there is little that can be done, except issuing a fact check. Shallow fakes fall in a legal grey area as they’re not technically ‘fake’, just out of context. According to Baburam Acharya, an advocate specializing in internet law, Nepal’s laws prohibit the broadcasting of misleading or harmful content but these terms are difficult to describe.

"If someone's speech is changed to make it seem like they said something they didn't with the use of Artificial Intelligence tools that replicate their voice, then there will be legal repercussions,” said Acharya. “Although there are legal provisions for deep fakes and distortion of facts, if someone just satirical graphics then that cannot be considered a violation of the law.”

Without explicit laws that prevent doctoring, there’s not much that can be done legally. But responsible viewers and readers can themselves make judgments depending on the quality of the video as successive edits can drastically reduce video quality, and also check if other media have covered the event in question. Social media users can flag or report controversial videos, encourage others to file complaints, and share fact-checks that debunk falsehoods.