The Nepal Police, government offices, private companies, restaurants, and your neighborhood uncle are all crazy about surveillance cameras. But who watches the watchers? 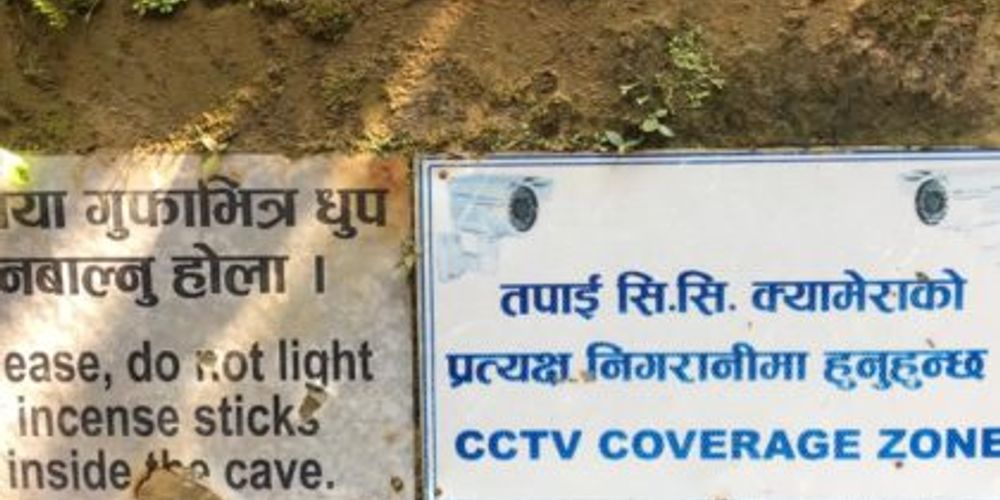 In September 2019, Kathmandu’s streets had a mere 467 CCTV cameras. That number increased by just over a third to 632 ahead of the visit of Chinese President Xi Jinping on October 12-13. This is only a teaser of what is to come, though. If Nepal Police plans work out in the next five years, Kathmandu’s streets will have cameras strung up like Tihar lights. The surveillance network, for that is what is planned, will eventually cover 18,000 locations, with more than 21,000 CCTV cameras dotting the Valley every 100m or so.

Inside the control room at the Metropolitan Police HQ at Ratna Park, the cameras are monitored in real time 24/7, by two shifts of four officers each. To one side of the bank of desktops sit the phone operators who receive calls from people reporting crimes, grievances, or complaints. The final third of the room, overseen by two police personnel, is a tangle of tech gear: the hard disks that power the computers, cables and plugs, disks of old footage, and more. In between desultory chit chat and banter, the monitoring officers cast a casual eye at their desktop screens. The entire space is dominated by an enormous screen which, when we visited in May, beamed text in Chinese that we could not read, headed by the phrase “China-Nepal” in English. The screen is used to monitor VIP movements, when necessary.

The majority of the cameras the officers monitor are in Kathmandu, followed by Bhaktapur, Lalitpur, and the Valley’s entry and exit points. None are yet equipped with facial recognition features and under half  have night vision capabilities, but most offer a 360 degree view and can be tilted, panned, and zoomed from the monitoring officers’ desktops. Recordings are erased every twenty days, except for footage pertaining to ongoing investigations.

Officials say the purpose of the cameras is straightforward, to improve security by helping investigations and deterring crime. They cite a comprehensively long list of bad things that occur on the streets: road accidents and bad driving; theft and people losing or finding objects; jaywalking; people going missing; physical or sexual assault and harassment; street fights; and rallies and political events, among others.

Ritosh Roy, Sub-Inspector at the Metropolitan City HQ, told us that surveillance cameras have also “largely contributed as evidence, especially to road and traffic management cases, and  help solve investigations and track down the culprits too,” including in cases of robbery or mugging.

The popular Facebook page Routine of Nepal Bandha recently approvingly noted that  18,000 road accidents  have been solved with the help of CCTV footage since cameras began to be officially installed in Kathmandu five years ago. We tracked down the source of the statistic, a police officer, but they did not want to be named or to discuss how they reached this conclusion.

Another officer explained a real case to us. Birendra Chaudhary (name changed) had his bike stolen from Chetrapaati on October 24, 2018 at 14:03. Nepal Police tracked the movement of the bike through CCTV footage and arrested the thief from Amrit Science Campus in Lainchour a mere 40 minutes later.

More recently, Krishna Bahadur Mahara was detained on charges of rape despite reported pressure on the survivor to recant her statement, in part because of CCTV footage that placed him in her neighborhood at the time of the alleged assault.

In downtown Kathmandu and across the Valley, privately-installed cameras—uncounted and unregulated—far outnumber those installed by the police. These, too, are for your own good. You might find yourself on camera in: shopping malls, department stores, and neighborhood pasals; bars, cafes, restaurants, and nightclubs; schools, hospitals, and temples; government offices and private companies. Or you could just be walking down the street, past a government office, an embassy or diplomatic residence, a large private house, a housing complex, or down any of Kathmandu’s zillion narrow, twisty side streets.

For as little as Rs 2,400, you, too, worried about security, can buy an IP camera with a fish-eye 360 degree lens and night vision on any of Nepal’s online shopping portals and put it up on your outside wall. All you are required to do legally is put up a sign notifying  passersby that they are under surveillance and to keep footage for at least three months. You don’t have to register anywhere. No one keeps track of private CCTV cameras in the Valley.

Man Bahadur Budha, an officer at Kathmandu’s District Administration Office, said: “The world today is all about Information and Communication Technology, we cannot ignore its importance in our daily life, and its operation has become almost impossible to control. Those installing private CCTVs have to follow the laws [as above]. Misuse of such data, invasion of anyone's privacy, or the causing of offense, it will be intolerable and actions shall be taken right away.”

Also Read: Digital privacy: an overlooked side of civil liberties in Nepal

A cursory look around Kathmandu is enough to give lie to the claim that the rules, however unconstraining, are followed. Commercial and government buildings alike, as also private residences and foreign missions, install cameras where they like and without any notices declaring this. A surveillance camera of the British Embassy—repositioned after we asked for comment—had for weeks, if not months, overlooked a neighbor’s private space. An Embassy official said it had likely been moved by monkeys.

Police officials are also blasé about privacy concerns; their approach reflects social attitudes to both privacy and security. Concern with the former is equated with having something to hide, and the latter is understood as an unproblematic concept we all have the same understanding of. State bodies, for example, may only collect data—which CCTV camera footage is—with the consent of the subjects, which is why the Nepal Police is required to notify the public where it has installed CCTV cameras. But this is almost never done. The state may also not release data except under very restrictive conditions, which do not apply to the manner in which footage from traffic cameras of the 2015 earthquakes was made public.

Former Superintendent Officer at Metropolitan City Police, Deep SJB Rana, now posted to Lumbini, expressed a widely held view when he told us: “There are concerns about privacy, but let’s look at the larger picture. People are not supposed to do things which are not allowed to be done in public. Unless you are committing a crime, you shouldn’t be afraid of surveillance. It’s for the security concerns, monitored by Nepal Police, it won’t invade anyone’s private space, as it’s only on the roads, which are public areas.”

Advocate Pravin Subedi at Paramount Legal Advisory said, “It seems as if the government takes the privacy concerns of individuals lightly. The government makes the rules and then does not follow it. There also need to be standardized practice and limits [on data collection] and preventive measures [to counter misuse].”

For more discussion on the global surveillance and citizen privacy issues, read Why security does not trump privacy.

We welcome your comments. Please write to us at [email protected] or comment below.

Having failed at punishing rapists, the government polices sexuality

Every year, cases of violence against women online are increasing in Nepal, and they have been made worse by ambiguously worded laws and policies and a general lack of public awareness.