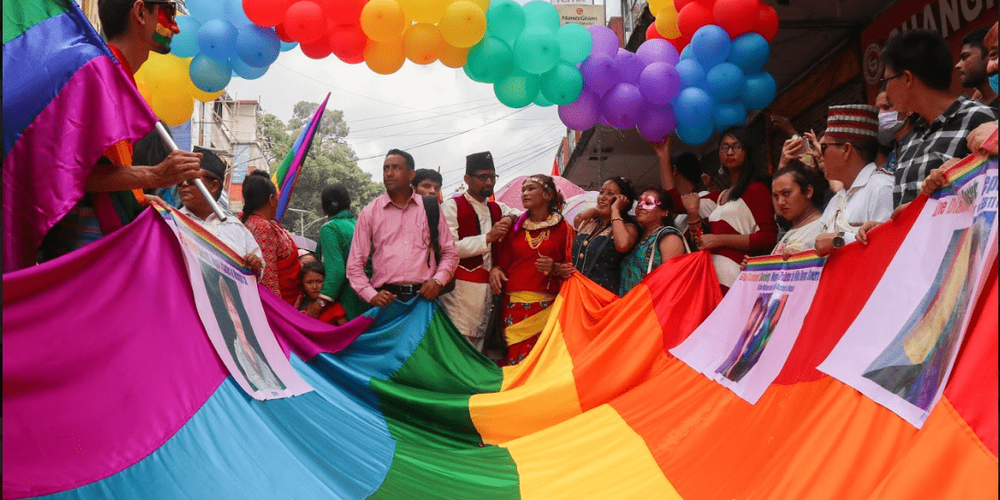 In about a month’s time, if everything had gone to plan, Nepal would have conducted its 12th national population census. This iteration of the census had attracted its fair share of criticism and praise, as the Central Bureau of Statistics had announced last year that this census would be more inclusive, counting the LGBTIQ population under the “other”category when it came to sex.

“The category is as stupid as asking someone are you a male, female or Newar? Sexual orientation is a different spectrum from gender and sex,” said Rukshana Kapali, a trans rights activist. “LGBTI are three different things: the abbreviation LGB is related to one’s sexual orientation; T is for trans people, in which a trans man identifies as a man while a trans woman identifies as a woman; and I is for intersex, where people can identify themselves as a man, woman, or non-binary.”

The clumping together of gender identity and sexual orientation into one category is making it more confusing for the queer population to mark their presence in society, said Kapali.

“The state heard the word LGBTI, and instead of trying to understand what it actually means, they mixed both gender identity and sexual orientation together,” said the 22-year-old.

With Covid-19 cases exploding across the country, the census has been halted. No official date has been released as of yet about when it will be resumed, but it is likely data accumulation will begin only next year. Many activists who are unhappy with the categorization are now using this time to advocate for changes to be made.

The census is taken every 10 years, and it records the social, economic and demographic data of the country’s entire population. The data thus collected provides a statistical foundation for targeted endeavors such as plans, policies, and research for the next decade to come.

The Central Bureau of Statistics (CBS) first introduced the ‘other’ option as a gender identity back in 2011, with an aim to be more inclusive and to provide equal space for gender minorities. However, only 1,500 people,  those of the third gender, identified themselves as ‘other’ in the last census.

“Accurate data is essential in policy design. We need to know the numbers of Nepal’s different communities, which areas they populate, and how many of them belong to a specific sex, gender, or sexuality. These statistics help determine how we make plans and policies and prioritize budget allocation, and in terms of participation for proportionate representation,” said Subin Mulmi, a human rights lawyer.

While many from the queer community are unsatisfied with the decision, there are some who see it as an opporutunity to make their presence felt.

“It takes little steps to move forward. This addition could very well be a step towards attaining inclusivity for people like me in the future,” said Anuj Peter Rai, a gay man, who says he will choose the ‘other’ category. “The way I am looking at it is this: when the census data is released, it will show the presence of our community in the population. And when we see a significant presence, we can claim quotas depending on our identities within.”

Almost two years ago, the UN Women, the CBS and other LGBTIQ organizations like Mitini Nepal, a lesbian organization, had held multiple meetings and workshops discussing strategies to make the upcoming census more inclusive, especially for gender minorities. The inclusion of the LGBTQI+ in the ‘other’ category is an outcome of the meetings that were held then.

“Whenever we ask for our rights as LGBTIQ people, government stakeholders ask for the number of people who are a part of this group. We do not have data for that,” said Sarita KC, executive director of Mitini Nepal who identifies as bisexual. “This count will not just advocate for the rights of trans people or intersex people but the rights of each of us in that community as a whole.”

But as the census is likely to be halted until next year, those who are unhappy with the category’s definition want to use this time to influence the government to change its decision which merges one’s sexual orientation and gender identity into one category.

“We are planning to file a writ petition seeking an interim order from the court that can halt the census process. This will hopefully allow CBS to also revise the questionnaire and include questions that will ensure proper gender disaggregated data beyond the binary of male and female,” said Mulmi.

“If the CBS wants to be inclusive about its data, the questionnaire for the census should include questions about sexuality as well,” said Kapali. She and her team have already drafted a set of questions and documents that can be part of the census questionnaire, and have submitted it to the CBS.

For now, Kapali suggests a simple change to avoid misrepresenting the queer community. “What can be done is instead of defining ‘other’ as LGBTQIA+, the category should be third gender and non-binary, for those who do not identify themselves as male or female,” said Kapali.

Bhutan’s shame: why the world must continue to remember the expulsion of ethnic Nepalis

Over 100,000 Bhutanese refugees have been resettled in third countries but 7,000 remain in camps in Nepal, hoping that one day they will be allowed to return home.