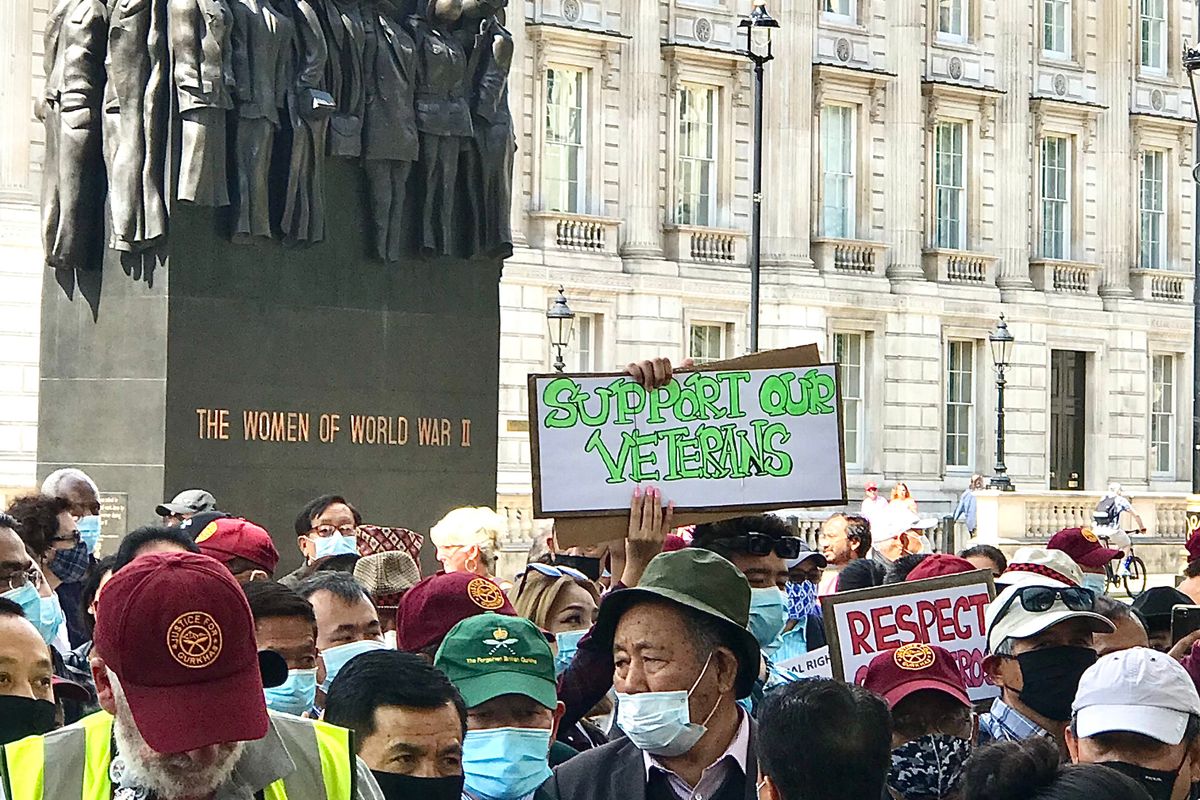 A Gurkha Justice protest rally in London in 2021. (Kamana Rai)

When I came across the Instagram page of campaign group @gurkhaequalrights, I learnt about Gurkha Satyagraha, a grassroots campaign group in the UK fighting for equal pensions and pay for Gurkhas as their British counterparts.

In the midst of the pandemic, I immediately found a close connection to the social justice movement that escalated in the form of a hunger strike and protests rallies last Summer at Downing Street.

Coming from a Gurkha family, I visited the hunger strike pen with my parents and learnt about the severity of the issue — elderly Gurkha veterans and a Gurkha widow staging a hunger strike due to the mistreatment they still faced by the British government.

With many Nepali youths in the UK attending the protests on a noticeable scale for the first time, I believe the social media page @gurkhaequalrights was a positive force in spreading awareness and mobilizing the young Nepali community to take action.

Yet what has been achieved so far?

It has been ten months since the hunger strike took place at Downing Street, led by  Gurkha Satyagraha members Gyanraj Rai, Dhan Gurung and Pushpa Rana Ghale. On August 19, 2021, the hunger strike ended after a staggering 13 days after the British government finally agreed on further talks, with deteriorating health conditions of the elderly Gurkha veteran, Dhan Gurung.

Since then, a petition to parliament has gathered over 100,000 signatures to address unequal pensions of Gurkhas who retired before 1997. Gurkhas who retired before 1997 received a fraction of the pension their British counterparts are entitled to. After service, Gyanraj Rai says that his pension was just £47 per month, while his British counterpart with the same ranking earned over £800. A parliamentary debate followed on 22 November 2021. However, the government stance echoed a broken promise on taking no tangible action on addressing Gurkhas’ grievances.

Created by Premila van Ommen, @gurkhaequalrights was prominent during the hunger strike and therefore effective in its outreach by sharing infographics, posters and event dates. For example, action to protest was organized via the page for rallies held on August 7 and August 15, 2021. The main posters were spread via social media which was an effective strategy to reach mainly a youth demographic. I was able to share it with friends and take part in the cause. I was also aware of its circulation on Instagram closely within the Ashford Nepali community, many whom I noticed also attended the rallies.

By actively participating, I was able to learn about Gurkha campaign groups such as Gurkha Satyagraha who led the hunger strike and educate myself on Gurkha history, particularly the darker reality beyond Gurkha bravery. For instance, infographics of pension differences revealed a 948% difference in British and Gurkha pensions — while a British captain earned £6,348, a Gurkha captain earned merely £606 per annum in 1989. This sheds light on the dehumanizing treatment by the British towards the Gurkhas historically and the urgency for Gurkha justice.

I believe digital social spaces like Instagram can be a receptive space for young people who can readily engage with socially conscious content, express their views and take action. Digital social spaces like @gurkhaequalrights act as an unorthodox space from traditionally white-centered media by raising attention to problems that marginalized POC communities like the Gurkha community face. Other social media pages such as @gurkhawomen share the stories of women from Gurkha backgrounds and highlight these unheard narratives that are also an important part of Gurkha history.

Social media can serve as a powerful medium to democratize access to knowledge, spread the word and build closer ties within the community. We saw this in action when the Gurkha Justice Campaign accelerated last summer and many Nepali youths took to the streets of Downing street for the first time to protest with Gurkha veterans, Gurkha widows, supporters and the wider Nepali community.

Liberty, an advocacy group in the UK, says the hunger strike forced the government to listen. Yet Mulbir Rai, a retired British Gurkha, warns that the governments have a universal way of dealing with hunger strikes — “Make a promise first and break it later.”

Since the hunger strike and protest rallies ended, this has been the case. The British government agreed to further talks with ex-Gurkhas on their grievances. Yet, it has been ten months and scheduled talks are still being postponed. The courtesy of a given date to prepare for a meeting has still not been given yet, Premila van Ommen of @gurkhaequalrights says.

On the other hand, by raising social awareness about Gurkha history, I believe there has been a positive link between social media and more youth engagement with the Gurkha Justice movement. As an indigenous Nepali young person, socially conscious digital spaces act as spaces to learn about unfiltered stories, support non-mainstream narratives often excluded from traditional media and take action. I further believe that the pandemic helped raise public consciousness during the time and the severity of a hunger strike brought attention on social media, to the Nepali community and beyond.

Knowledge is empowering, even if the truth is bitter. The history of Gurkhas is not just about bravery —  it is also seeped with historical, colonial injustice and a betrayal of a 200 years legacy of friendship — what the British government can no longer keep sweeping under the rug.

Kamana Rai  Kamana Rai is a QMUL graduate and an indigenous Nepali freelance writer based in the UK.

Why many Nepalis are converting to Christianity