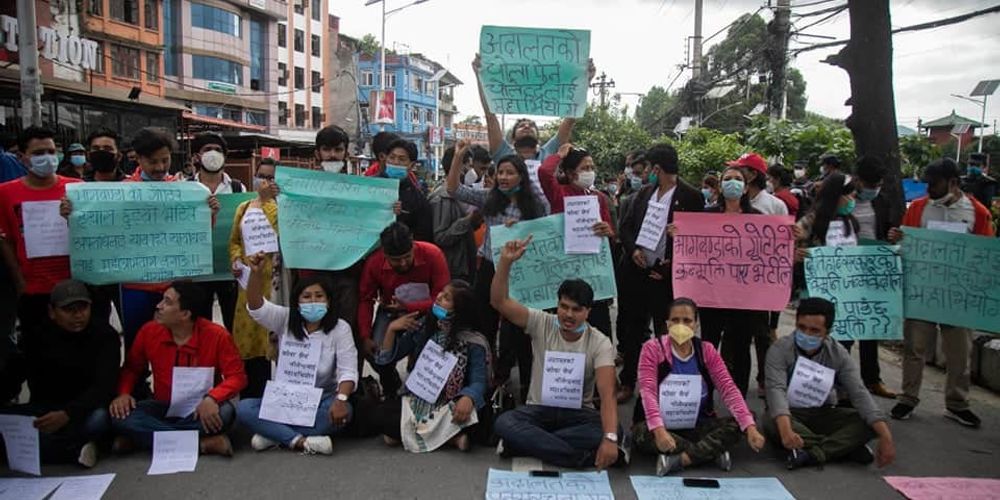 Over the last few years, the supreme court, headed by Chief Justice Cholendra Shumsher Rana, has handed down a host of controversial verdicts. The latest controversial verdict came on July 23, when the apex court commuted the sentence of Ranjan Koirala, who was serving a life sentence. It’s a decision that has enraged the public and experts.

Protests have sparked in Kathmandu and outside the Valley, demanding the impeachment of CJ Rana and other justices for their history of controversial judgements. On Friday, youths and student leaders of various political parties staged a sit-in protest at the Maitighar Mandala. During the protests, they displayed placards against CJ Rana and demanded that the political leadership immediately initiate the process for his impeachment. Some of the placards read “Searching for justice”, “Impeach Cholendra to revamp the court”, and so on. As per the Constitution, one fourth of the total members of the House of Representatives can register a motion of impeachment against the CJ or justices on the grounds of their failure to fulfil the duties of their office. These mostly pertain to violations of the Constitution and the law, or incompetence, misconduct, or failure to discharge the duties of office honestly, or if the justices are in serious violation of the judiciary’s code of conduct. Top politicians, including former prime minister Baburam Bhattarai, have taken to social media to express anger against this latest instance of faulty judgement.

The anger seems to be more than justified, especially given the details of the latest mishandled case.

On January 11, 2012, Ranjan Koirala, a Deputy Inspector General in the Armed Police Force (APF), brutally killed his wife, Geeta Dhakal, stuffed her dead body into a sack, drove it in his own car to Palung, in Makawanpur, and torched the body. He returned to Kathmandu while the body was still burning in the middle of a dense jungle in Palung.

Koirala later returned to the crime scene again to confirm that her body had incinerated completely. On his second trip to the jungle, locals spotted him at the crime site. Oblivious of his rank in the APF, they handed him over to the local police. Geeta’s family was already starting to get worried because she hadn’t been in contact for some time.

They also knew that Koirala had relations with another woman. Two days after the incident, they filed an application at the Police Crime Division, Hanumandhoka, seeking information about her whereabouts.

During the course of their investigation, the police learned that Koirala’s car had been spotted in Nagdhunga a day after his wife, the mother of Koirala’s two sons, was reported missing. This clue led them to Geeta’s charred body in the jungle and to completing the investigation. Koirala later admitted to the crime and was suspended from his job. In April 2014, the police filed a murder case against him, seeking life imprisonment and the confiscation of his properties.

Koirala’s girlfriend, Tara Regmi, was also given a jail term for being an accomplice in the murder. But she was released after serving just a year of her sentence.

Since Regmi’s release from jail, Koirala had been lobbying for his early release too. To make this possible, Koirala moved the Patan High Court, seeking to reduce his jail term. After the High Court upheld the junior court’s verdict, he moved the Supreme Court.

Responding to his appeal, a division bench, led by Chief Justice Cholendra Shumsher Rana, waived 11 years from Koirala’s jail term and ordered the murder-convict’s release. In its verdict, the bench of CJ Rana and Justice Tej Bahadur KC argued that the objective to punish Koirala had already been met and that there was no need to keep him behind bars any longer. This argument was made on the grounds that Koirala’s sons urgently needed him to resume guardian duties.

The judgement is questionable on many counts. To argue that his sons needed him makes for an exceedingly weak premise. And it is unthinkable that his sons would prefer his guardianship--no court in their right mind would entrust the guardianship of wards to the murderer of their mother. Besides, both sons are now adults. Further, Koirala’s property has not yet been confiscated, as had been mandated by the court.

None of Koirala’s family members were there to receive him when he was released from jail, on Thursday. Instead, it was his girlfriend who came to pick him up. It was only natural that his family members wouldn’t ferry him home. His late wife’s family are enraged at the court verdict. They also feel insecure. They have termed the apex court verdict unjustifiable. Further, they also fear that the waiving of jail terms of those involved in heinous crimes of a similar nature could send the wrong message to society.

The verdict has raised serious questions about how the apex court has been deciding cases. Some have questioned CJ Rana’s intent behind waiving the jail term of a murder-convict, and many are also beginning to question the judgements Rana handed down in the past. Before he became Chief Justice, Rana had worked as a judge in the Special Court, the fast-track court established to settle corruption cases. In the Special Court,  he was part of a team that routinely acquitted high-profile politicians involved in corruption, without their first conducting a proper analysis and review of the cases. Indeed, so questionable was their track record, the Judicial Council had recommended action against Rana and two other justices for wrong judgements.

And in the run up to Rana’s joining the apex court, a complaint was filed at a parliamentary hearing committee, demanding that he not be named Chief Justice—because during his tenure in the judiciary, he had registered public land as private property, in his relative’s name. Although Rana had engaged in quite a few public-relation stunts at the judiciary, he had, upon becoming Chief Justice, promised to improve the apex court’s tainted image. But under his leadership, the court’s verdicts, including some recent ones, have courted controversy one after another.

Read also: Foundations of transitional justice mechanisms in the country may be destroyed with reversal of historic Supreme Court verdict

Another recent verdict by the court, for example, has turned the public livid: the apex court’s decision to release on bail Prithivi Malla, 21, who killed Leela Devkota, of Gorkha, in a drunk-driving incident in Kathmandu. A division bench of Sapana Pradhan Malla and Manoj Pradhan ordered the release of Malla, who was the accused in the hit-and-run case. The bench’s rationale for releasing Malla was that he suffered from severe depression and asthma and was thus at high risk for Covid-19 infection.

Dismayed by the apex court’s decision to slash the jail term of murder convicts, the Office of the Attorney General (OAG) has filed an appeal. Hours after the release of Koirala, Attorney General Agni Kharel convened a meeting and initiated proceedings to file the application at the apex court. The office of the OAG has stated that the decision to reduce the jail terms of murder-convicts has undermined the previous precedents of justice applied in several similar cases.