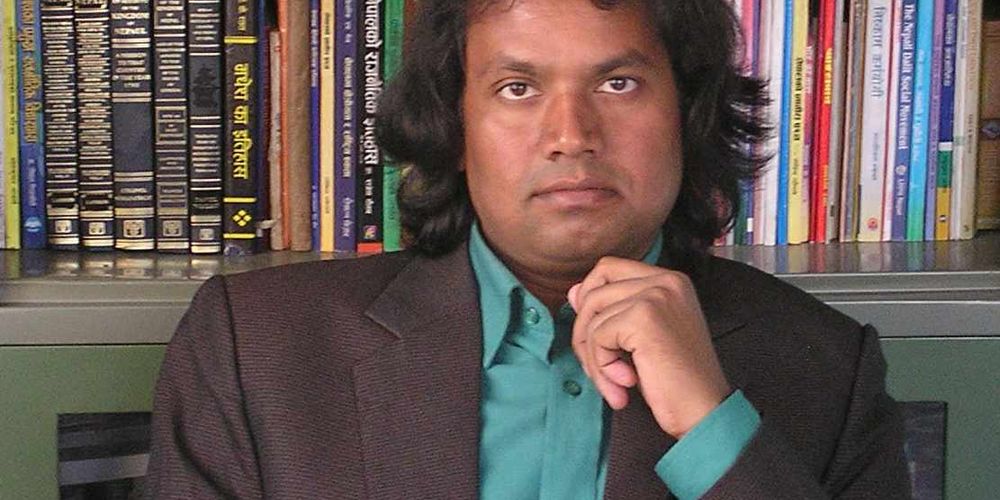 When I got to the Special Court, the hearing was already under way in the case of Government of Nepal v. CK Raut. The defendant is a man who is being prosecuted for his writings denouncing discrimination against the Madhesis and advocating for swaraj (self-rule)—an individual with ideas powerful enough for the Nepali state to feel threatened. The government accuses him of “crime against the state” and has charged him under a law created during the monarchy to stifle dissent. If he is found guilty, Raut will be sentenced “for life,” which means 20 years in jail.

I took a seat in the middle row and listened as each side made its case.

“He has a website where he publishes separatist information,” the government prosecutor said in his closing statement, “we can also prosecute him for cybercrime under Electronic Transaction Act because the published material is still there.”

In the front of the court, three judges sat at the bench, identically dressed in daura, suruwal, and topi. The chief judge at the centeked,

“Others have written similar things, but why should we only prosecute CK Raut, and that too years after he first published his views?”

“That type of literature should be banned,” the government lawyer replied, resting his case after several moments of rambling. He did not answer the question.

It was now the defense’s turn. With his voice cracking, advocate Sunil Kushwah argued that Raut was merely exercising his fundamental right of freedom of expression, which is inscribed in the Interim Constitution.

“The state should return his confiscated goods and respect the dignity of the individual and the freedom of expression,” Kushwah concluded.

The hearing was over by noon. For five hours we waited as the Special Court deliberated over whether Raut should be released on bail as his lawyers had pleaded.

It was only then that I noticed CK Raut sitting in the last row, the backbench corner, with his back to the wall, surrounded by Madhesi friends. He was not handcuffed. Two policemen sat in the next bench, one in front, and two diagonally. Raut had long, wavy hair and sported a moustache. His dark blazer contrasted with his white shirt. He could easily have been one of the lawyers in the room. He was smiling, displaying a row of teeth the color of his shirt. He looked healthy.

“This is your time to interview him,” a friend murmured, nudging me forward. I collected myself and crossed the room. As I approached, I stuck out my hand and eagerly switched on my recorder. Raut shook my hand politely. It was surreal, facing a man who had been jailed for speaking his mind. For a moment, I faltered, unsure what to ask. I had to remind myself why he was there.

“Why do you think Madhes should secede?”

“The police have told me not to do interviews,” he said.

I asked him about his family, whether he was allowed to talk to them on the phone. He said he wasn’t. Raut looked over my shoulder; there were a few other people in the room he wanted to speak with. He asked someone to come and sit next to him. I moved away and decided I might be better off talking to people who knew him personally.

The hours passed slowly. As we waited for the court order, everyone in the room must’ve read the same copy of Kantipur that was passed around to kill the time. I watched as Raut flipped through it. He then read the printout of the law under which he was being prosecuted.

“One good thing is that by the time he gets out, Doc Sa’p will be a law expert,” someone joked. (Most people call Raut “doctor” in reference to his Cambridge PhD.) Raut was sarcastic throughout the day when he talked about his case, with flashes of seriousness when he spoke of the Madhes movement and politics.

Some people left, others arrived. Except for the police, I noticed that I was the only non-Madhesi in Raut’s corner. The police simply sat and looked on as he spoke. At one point a lawyer came and whispered in his ear. At another point two policemen followed him to the toilet.

Three hours later, as I was talking to someone who had known Raut since he was a young man (Raut was the youngest son of working class parents and was stubborn, the man confided), Raut came over and stood behind us. He leaned forward, his hands spread over the back of the bench.

“What do you think of the Nepali Congress proposal on federalism?” I asked him.

“It’s dishonest,” he said, “federalism could be a positive step toward ending discrimination, but that’s not going to happen.”

“Do you think the current government will take steps to end discrimination against Madhesis?”

“No,” he said sternly, “the discriminatory character of the state will not end. This government is moving in the opposite direction. We have given them time to change, but there has been no change. The problem is that of an entrenched Pahadi attitude that thinks, mistakenly, that a country’s boundaries are unalterable. But countries break, just as families break when two brothers can’t stay under the same roof.”

In his written statement to the court Raut doesn’t come off has a radical separatist. He has said that his writings are intended for “social, political transformation and political rights.”

I asked for his thoughts on why he was arrested at this time, a few months before the deadline for constitution. He had been putting forth the same views for years before the police decided to arrest him.

Raut thought his arrest was a kind of “testing tool” of a section of Nepal that doesn’t want a constitution.

“They will keep me in jail for the next six months or so under different pretexts—until the deadline for the Constituent Assembly passes,” he said. “You heard earlier the way the government lawyer was invoking the Electronic Transaction Act. That was a message. Even if they let me out on bail on this subversion case, I’ll be re-arrested, either under Public Offense or this Electronic Act he brought up.”

He then asked me not to talk about his family in the media. “There is a hatred against me out there,” he said, “that’s part of the reason there’re so many police around me.”

At 5 pm, a government official entered and asked Raut to come to the registrar’s office. Raut’s men and the trailing police officers followed. A few-minutes wait and the registrar arrived, sat on his swiveling chair, and addressed the audience of fifteen men and a lone woman, who looked like a reporter.

Many faces in the room lit up, but Raut remained passive. His eyes were on the registrar; his fingers were on his lips. He was thinking.

“Ok, let’s all go now, come on,” the press officer of the court said, “you can read the court order later.”

“Perhaps it’s better for everyone to listen to the order,” I suggested.

While the registrar read the order from the bench of three judges—Mohan Raman Bhattarai, Bhupendra Rai, and Narendra  Siwakoti—he was frequently interrupted by phone calls, which he took, grunting out information we all already knew.

He turned to the defendant.

“Given that the defendant refuses the allegation that he ran a campaign to break Nepal from Mechi to Mahakali, south of the Chure Hills to the no man’s land . . . but given that it cannot be said that no crime against the state has been committed . . . and keeping in mind the freedom of expression . . . based on Muluki Ain . . . a bail amount has been set.”

As the registrar read, Raut looked irritated and fidgety. He clearly disapproved of the order.

“We can go today? Now? Sure? He won’t be re-arrested?” one of his friends asked, incredulous. Nobody expected this order.

By now, the press officer was keen to get everyone out of the registrar’s office. “You can carry on your discussions outside,” he said. Everyone then flocked to the corridor. Raut was led to a bench where he sat, surrounded by supporters.

“Why do you think they will re-arrest you?”

“This is a mayajal. I will not pay the bail and stay here.”  I had heard Raut say earlier in the day that he was like a fish on a hook. If they thought he was too much trouble, they would just pull the string tighter.

A jovial police inspector walked into the crowd. I had chatted to him earlier in the day about his stay in Kapilvastu, constantly amazed by his views about the people he was supposed to serve and protect. He laughed easily and spoke alternately in Nepali and Hindi. It seemed that the easy laugh was a part of the arsenal he carried, just like his camouflage shirt or his gun.

“Is it true that the police will arrest him again if he pays the bail?” I asked him.

“That is so,” he said, grinning from ear to ear. “The order you just heard said nothing about the Biratnagar case. We’ll have to take him there.”

For a moment, inside the registrar’s office, I’d assumed that Raut had refused to pay the bail because he thought it would be better for his movement if he stayed in jail. Whether he’s inside or outside, all he wants is for the movement go on, someone had told me earlier in the afternoon. So at first it seemed the man refused his freedom for the sake of his movement. But that was not true. Raut was not free to go. The law had not spoken. The bail was a bait, and Raut didn’t bite. All that had transpired that rainy afternoon was one more gimmick by the state, which knows that it must release Raut eventually, but carries on because it can. For now.