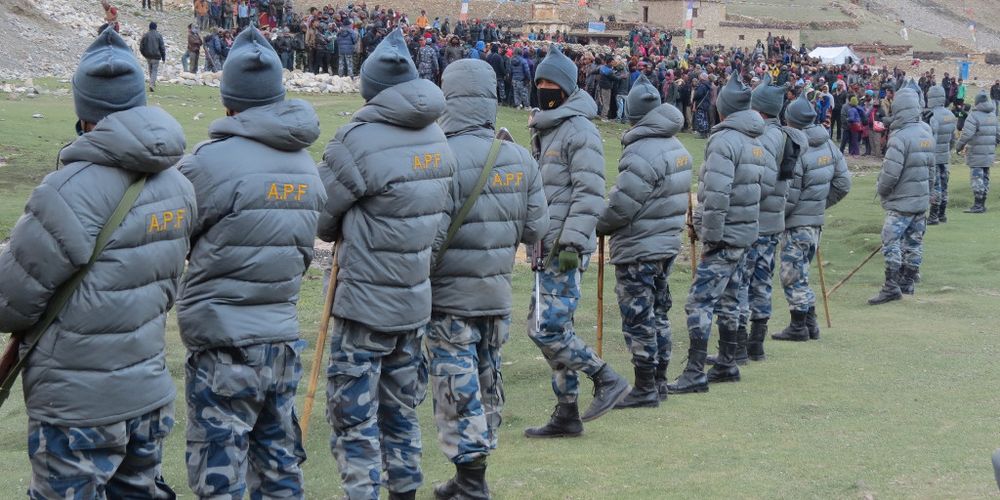 Dho-Tarap in Dolpo comes alive during its short-lived summer from May to July. Grey mountains acquire rich textures, the river valleys turn green, and thousands of people, both locals and those from outside, move to higher pastures in search of the precious caterpillar-fungus, yartsagumba. By collecting and selling it, a family may be able to sustain themselves for the rest of the year.

Yartsagunbu is highly prized in Traditional Chinese Medicine for its rumored ability to cure cancer, impotence, and work as a tonic and aphrodisiac. Although more popularly called “yartsagumba,” the more accurate term is yartsagunbu, which means “summer-grass winter worm” in Tibetan. A single piece – weighing, on average a third of a gram – goes for between USD 3 to USD 10 locally. By the time it gets to markets in mainland China and Hong Kong, it is sold for over five times its cost price.

In June 2014, Dho-Tarap was the site of violent clashes between locals and the police. On 3 June around 4 pm, 50 heavily armed police from the Armed Police Force (APF) and Nepal Police (NP) opened fire on a group of over 250 locals, who had gathered for a meeting. Subsequently, the police conducted forcible house searches of the entire village, breaking door and vandalizing their property. By the end of the violent incident, one man was killed, 13 were taken into custody, and several dozens were injured. Another man died while undergoing treatment in Kathmandu.

Ebi Tsewang, 85, vividly describes the traumatic impact of the police actions that night.

The violence had erupted over the management of yartsagunbu harvest in the area. Tensions escalated when representatives from Shey Phoksundo Buffer Zone Management Committee (SPBZMC) halted the local practice of collecting a “nominal fee” from yartsagunbu harvesters from outside the region, and sought to supplant that with an ambiguous set of regulations, which seemed to require the use of APF.

The 13 who were detained, and tortured, were released the following day on the condition they sign their names on a document stating that the death of a local was not caused by police beating. The group included women and those who could neither read nor write.

This eruption of violence reveals the distance between the state and the people of Dolpo. Not a single person in the bureaucracy and security forces comes from the local community. Neither do they speak the local language, nor do they care to learn about its culture, acting instead as a colonial power. The police repeatedly shouted derogatory and provocative comment at locals: “Saaley bhote haaru lai ek ek gari maar din chu, we will kill you Bhotes one by one.” Bhote is a pejorative used against the highlanders, suggesting that they are Tibetans, and therefore not Nepali.

Ngawang Tenzin recounts bitterly how during his detention, the police inspector in charge of the APF yelled at him in English: “This is Nepal. But it is not your country.”

“But it is not your country”

The assumption that Dolpöpas are not Nepali people is akin to discrimination against people of Terai, where the Madhesis are dismissed as Indians. Despite Nepal’s cultural and ethnic diversity and move towards federalism, the idea of a monocultural national identity persists. This continues to shape behaviors towards the ethnic “other,” particularly from local senior bureaucrats and members of the security forces.

Kunga Samdup, who was also detained, speaks of how the police repeatedly kicked him in the face, calling Dolpöpas animals and the women from the community whores.

The next day, disgruntled yartsagunbu collectors claiming to represent 28 districts – also victims of the incompetence of the national park’s management – protested vociferously against the locals, demanding immediate permission to harvest yartsagunbu without paying the nominal fee.

Preceding this demonstration, Dolpo’s representative in the Constituent Assembly had brokered a deal among the locals and representatives of SPBZMC. A provision of Rs. 10 lakhs to the family of the deceased Tsering Phurwa Gurung was agreed upon. According to multiple sources, the amount was later reduced to Rs. 5 lakhs for his family, while Rs. 3 lakhs was promised to the family of Dhondup Lama, who died while undergoing treatment in Kathmandu a week after the meeting. So far, the former has received Rs. 4 lakhs while the latter has received Rs. 1.5 lakh.

Nearly a month later, the Home Ministry formed a three-member panel led by the chief district officer of Surkhet, Raju Kumar Shrestha, to investigate the incident. However, the team returned from Dunai, the district headquarters of Dolpa, located at a travel distance of three days from the site of the violence, without meeting a single victim. Their report has not yet been made public. A case registered at the National Human Rights Commission has also not yet been followed up.

Later in 2014, months after the violence, the locals walked down to Dunai to demand the implementation of the agreement they had reached with the SPBZMC. According to the minutes of the meetings, among the things the authorities agreed on was the return of 80 percent of the tax collected from the yartsagunbu harvesters to the locals, as well as the amount that had been confiscated from them. Further, harvesters would be restricted from entering winter pasture beginning the following year. Unsurprisingly, none of these promises have been met.

In 2015, as the next yartsagunbu season drew closer, locals made several requests to the authorities at Shey Phoksundo National Park (SPNP) in the district headquarters to restrict the number of harvesters. However, the officials turned a deaf ear to this plea and the harvest went on as haphazardly as before: thousands stormed the high pastures, while the locals watched, dejected and defeated.

There are various acts, regulations and guidelines that govern the management of national parks and buffer zones in Nepal, but they do not contain specific provisions on the nature and extent of local participation in the management of the buffer zone. They also lack directions on how park authorities should disburse parts of their revenue to the local population.

According to a source, park officials collected royalties approximately worth Rs. 35 million from Dolpa district, with around Rs. 12 million from Dho-Tarap alone. According to the Buffer Zone Management Regulation 1996, a certain percentage of the park revenue should be used for community development activities. However, Gyalpo Bhote, a local educator, said: “The SPBZMC, in the name of conservation, has been giving entry to thousands of outsiders to Dho-Tarap buffer zone area and have also been collecting entry tax without discussing or getting consent from the local buffer zone user committee. So far, not a single penny has been used for development activities in the area.” Several other members of the local user committee I spoke with said they had no idea on how the amount collected each year is spent.

At the end of the 2015 season, given the violence that marked the previous year and low expectations regarding assistance from the state, the locals in Dho-Tarap were thankful for the fact that no major violence had occurred. However, a range of misfortunes struck the community. The quantity and price of yartsagunbu plummeted. The earthquake in central Nepal damaged the border road with China at Kodari. This cut Dolpo residents off from their annual share of subsidized rice, which is delivered across the Maryum La border pass through Tibet. One of the harshest winters followed, due to which, along with overharvesting of yartsagunbu in winter pastures, many yaks died of starvation. In early 2016, armed robbers terrorized the whole community and robbed two of their eight gonpas (monasteries).

Added to the list of issues causing anger and frustration is the poor state of management of the national parks. George Schaller, the acclaimed wildlife biologist who accompanied the writer Peter Matthiessen in their 1973 trek to Dolpo, returned to the region after 40 years in 2016. In an unpublished note (detail summaries of the note can be found here), he expresses his disappointment at “the seeming lack of interest and initiative of the park authorities and the army unit”. He writes, “Cooperation between Park and communities is minimal… Trails are not maintained, litter not collected, and there is gross lack of oversight of logging and the caterpillar fungus issue… communities are not paid promised funds, creating mistrust toward the Park and government. The Park authorities seem to know little about the Park, and indeed have never visited many parts of it.”

Changing climatic conditions have made the yartsagunbu harvest unreliable. In 2015, when Dolpo saw the heaviest snowfall in recent memory, harvesters noticed a sharp decline in the availability of yartsagunbu. The following year, there was an immediate drop in the number of harvesters. According to Phurwa Lama, a former teacher at the local school, there were only about 500-600 yartsagunbu harvesters in Dho-Tarap from outside this year, which is a considerable decrease from over 5000 harvesters in previous years. This is an alarming signal for the livelihood of the locals, but for the moment, they welcome it as a consoling change.

Meanwhile, the people of Dho-Tarap, along with Bentsang Tso-Sum, now constituted under the Dolpo Buddha Rural Municipality within the new federal structure, participated in the local elections on 14 May 2017, held for the first time in 20 years. The renewed hope and excitement among locals is palpable. Gyalpo explains: “We have an elected local body for the first time in decades. Therefore, we hope to once again manage and conserve the buffer zone on our own which we have done for generations.”

Only time will tell whether this will be another example of empty promises and frustrated expectations, both of which have led to conflict in the past. Meanwhile, management of the harvest continues to be haphazard. And three years on, the families of the bereaved still await compensation, and the people of Dho-Tarap still wait for judicial accountability for the sustained violence they endured during Dolpa’s longest night.

Author’s note: I am extremely grateful to Sey Namkha Dorje for allowing me to use his footages here, and to Gyalpo Bhote for sharing his valuable insights and updates from Dolpo.