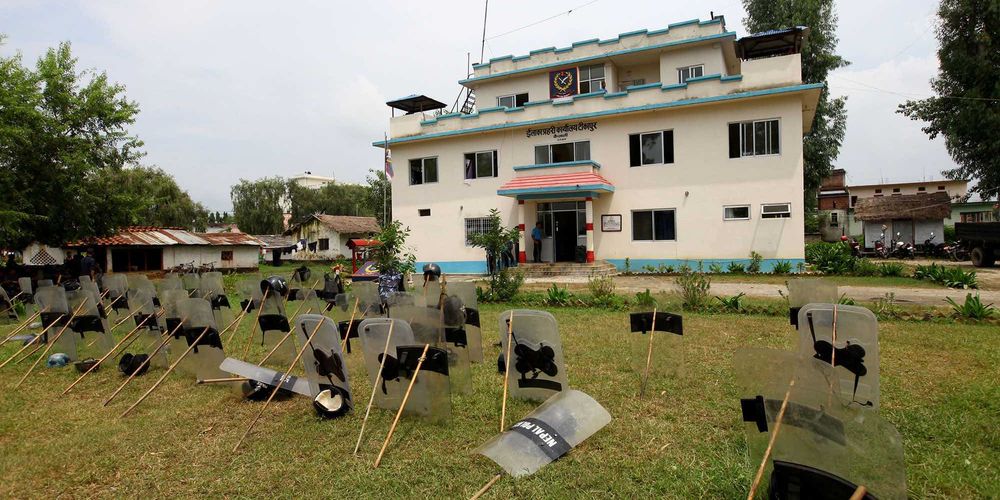 “Everything has changed since that incident,” said CP Sapkota, a shopkeeper in Tikapur, a small town in Kailali district. It was a dusty afternoon; he was dusting the clothes hanging outside his shop, keeping an eye out for customers. Nearby in Khadga Chowk, a large poster of an infant hung on a wall. Bold letters proclaimed him a martyr of the Akhanda Sudur Paschim.

In August 2015, Tikapur witnessed a violent confrontation between the indigenous Tharus and the security forces. Eight security personnel lost their lives. A child was killed by a stray bullet.

A little further from Sapkota’s shop, a charred signboard of Phulbari FM lies abandoned in the street in front of a burnt building. After the killings on 24 August, an irate crowd burned down a radio station belonging to a Tharu. The vandals belonged to Akhanda Sudur Paschim, a group that claims to represent Pahadi interests. They were backed by the security forces. Around the town one can see dozens of fully or partially burnt homes and shops of Tharus.

In the aftermath of the killings, thousands of Tharus crossed the border into India and fled to other parts of Nepal to escape the crackdown by the security forces. Many have not returned yet.

The Tharu-Pahadi divide in Tikapur has deepened. Tharus are now boycotting shops owned by Pahadis.

“In Tikapur bazaar, the majority of shops belong to the hill community,” says Chitra Bahadur Chaudhary, a 46-year-old teacher at a local school. “Tharus don’t go there anymore.”

Tikapur has changed in other ways too. Before the incident, it used to be the hub of Tharu activists demanding an autonomous Tharuhat state. Not anymore. Many Tharus feel discrimination against them has become more blatant.

Ganesh Chaudhary, a local journalist, says that members of the hill community refuse to nominate Tharus even for the low ranking post of peon. The Tharus make up 40 percent of the population in the municipality, according to the 2011 census. Yet not a single Tharu was nominated in the recently formed committee of Tikapur Smart City committee and the Red Cross Society.

"Even today, the Tharus can't sleep in peace," adds a local Tharu leader from CPN-UML, who left the party to become a Tharuhat activist but has since returned to his old party.

Members of the hill community offer a completely different narrative. Rang Adhikari, a local UML leader and Akhanda activist, says the situation is “normal.” He blames Madhes-based leaders who gave fiery speeches in the days before the protests for destroying social harmony in Tikapur. “The homes and shops of the Tharu leaders were destroyed by the relatives of the murdered police and child,” he says. “Later, local goons burned hill people’s shacks and handcarts too.”

A staff member of Tikapur municipality, who was also an Akhanda activist, claims the government was right to ban rallies organized by Tharus before the killings on 24 August. “Otherwise who knows what could’ve happened,” he says.

On the other hand, locals say the ban on rallies was the main cause behind the clash between the Tharus and the security forces.

An ugly day in Tikapur

But Akhanda supporters wanted the two districts to belong to an undivided Far-West province.

After a draft constitution was released with a map of six states, protests erupted in many places. The major parties in Kathmandu quickly addressed the demands of protesters in Surkhet, Thori [Parsa], Baglung and Jumla. But the Tharu’s demands went unheard.

The anger of the Tharu activists “reached a tipping point” when major political parties added a seventh province to placate the protestors in the hill districts. The Tharu community took to the streets. They felt this was a “do or die” moment. The leaders of the Tharuhat movement described it as the “ultimate battle,” says Ganesh Chaudhary.

The government responded by imposing curfews. The Akhanda supporters, whose demands were met, now started obstructing Tharu rallies. Prior to August 24, Akhanda supporters and Tharus had fought at Durgauli, four kilometers north of Tikapur. Cadres of Akhanda burned the office of the Tharu Kalyankarini Sabha, one of Nepal’s oldest community organizations working for Tharu welfare. They vandalized shops belonging to the Tharus in the bazaar.

The government turned a blind eye to the violent acts of Akhanda supporters. It continued imposing curfews at night and issued “prohibition orders” during the day to prevent Tharu from holding rallies in the town center.

The “fast-track” process for promulgating the constitution gained momentum. Meanwhile, Tharus were denied the chance to protest. On August 24, The Tharuhat Struggle Committee planned to go to Tikapur, break the “prohibition order,” and hang a signboard that said ‘Tharuhat Autonomous Province’ on the Municipality office building. Protesters in other Tarai districts had hung similar signs on government buildings.

On August 24, a large rally of Tharus had gathered on the town’s outskirts. But the police did not allow the rally to proceed to Tikapur. Tharus had long felt that the security forces were on the side of Akhanda supporters. The aggressive crowd went out of control. In the ensuing violence, a mob of angry protesters killed eight policemen. A child in a nearby home was also killed by a stray bullet – there are disputes about who fired the shot. Contrary to standard practice, the police did not carry out an autopsy.

The police have filed cases against 58 Tharus. Twenty-four are in jail and the rest are in hiding. The arrested include leaders of the political parties, teachers, ordinary youth, Badghars (village chiefs), and ex-Maoist fighters.

A new report published on 19 July 2016 by Amnesty International reveals that in the wake of the August 24 incident, many Tharus were subjected to arbitrary arrests, torture and other forms of ill treatment at the hands of the police. Most of the detainees the organization spoke to said they had been tortured in custody. All detainees said they were forced to sign “confessions” admitting to their alleged crimes.

The Akhanda supporters and the security forces reacted with fury. During the “curfew” imposed after the killings on August 24, more than 41 homes and shops, including Phulbari FM radio station, were looted, burned, and destroyed overnight. The homes and shops belonged to the leaders and supporters of the Tharuhat movement. The security forces, angered by the death of their colleagues, encouraged the attacks, according to eyewitnesses. Lawmaker Janak Raj Chaudhary and Resham Chaudhary, Vice-chairman of Nepal Sadbhabana Party, were among those whose houses were destroyed.

“Journalists, human right activists, security forces in civilian clothes – all were involved in burning and looting Tharu’s property,” said Chitra Bahadur Chaudhary, a local teacher who was imprisoned for 11 months on trumped up charges during the Maoist war.

Numerous sources revealed that journalists belonging to government media, including Nepal Television, led the mob that included local leaders and cadres of the Nepali Congress and UML – all supporters of the Akhanda movement.

None of the journalists or media associations bothered to bring out a press release denouncing the burning down of the radio station.

In the following days, the Nepal Army and the Armed Police Force were also deployed in a crackdown against Tharus. Security forces raided Tharu villages around Tikapur.

“It was worse than during the war. In the days following the August incident, the army and police patrolled the town in plainclothes. They used to come in vans wearing masks,” says Raj Kumari Tharu, whose first husband was disappeared by security forces during the Maoist conflict. “No Tharu could walk in the street. They were arrested for just being Tharus.” Non-Tharus, however, were free to roam in the streets in groups.

Following the targeted attacks against Tharus and their property, locals filed a case against 29 Akhanda leaders at the district court. According to Johari Lal Chaudhary, a lawyer who is assisting Tharus, the complaints were signed by the victims and mailed to the Prime Minister’s Office, the home ministry, and the district police.

Not a single complaint was registered.

Lawyer Johari Lal Chaudhary says that the Tharus filed the complaint through the post office because they feared arrest if they showed up at the police station. Many of those whose homes were burned down are accused of being involved in the August 24 killings.

Ten months after the attacks, no one has been arrested or charged for the looting, arson, and destruction of Tharu homes and property.

“The government can’t dodge its responsibility by putting the blame on an ‘unknown group,’” says Johari Lal Chaudhary.

The victims assert that the government should start a judicial investigation into both the incidents, and that politicians who encouraged the Akhanda mob should also be held responsible.

After the major parties addressed the demands of hill communities – in Jumla, Surkhet, Baglung and Thori (Parsa) – Tharu leaders coined the term ‘sajatiya’ (of same caste/ethnicity). Many Tharus feel the government only addressed the demands of ‘sajatiya’ movements, one led by people of the same ethnicity as the leaders of the major parties. For the Tharus in Kailali, the state’s conciliatory response to the protests in Jumla and Surkhet proved that the state viewed the Tharus differently.

The district security committee has decided to ban Tikapur Tharus from holding political programs such as mass meetings and rallies.

However, Govinda Rijal, the Chief District Officer of Kailali, claims that both Tharus and non-Tharus have been banned from holding political programs. Rijal describes the situation as “normal” but is worried about renewed conflict.

“The government is ready to provide relief to the owners of the 82 houses who suffered damage,” he says. He claims the Tharu complaints were not investigated because they weren’t “properly filed.” He has promised to talk to the government lawyer to look into the matter. Rijal admits that many Tharus had complained to him about being treated unfairly by the security forces.

Tharus refute the claim that the government’s action has helped preserve social harmony. For example, the then PM Sushil Koirala went to Tikapur after the August incident, but did not meet any Tharu people.

“The Tharu people say – Hami milera baseka hoinau, sahera baseka hau,” [We have not lived in harmony, we have tolerated each other],” said Ganesh Chaudhary. “There was no social harmony before, there’s none now. The Tikapur incident only brought that to the surface.”

But the political parties, NGOs and civil society bodies such as the Chamber of Commerce are all pretending there’s no communal divide in Tikapur. Local journalists and Tharu intellectuals told The Record that last year’s protest against the proposed state boundaries was the first instance in which the Tharu community in Tikapur had stood up for their rights and identity. They are still paying a price for it.

“Twenty-nine hill people accused of crimes are walking freely, while Tharus have been jailed, displaced, and forced to live underground,” said Phularam Chaudhary, a former Maoist combatant who led the Tharuhat movement in Kailali district. “How can you call it a peaceful and harmonious situation when Tharus are living in terror?”

Editors note: This news is made possible by the support of our readers who contributed to our crowdfunding campaign. Thank you.

The police and the paramilitary biased against us: Saptari locals

Relationships deteriorate after the police forces killed five Madhesi protesters in the district.

The mob, calling the women “Christians,” vandalized their tent and threatened to decapitate all of them