The mob, calling the women “Christians,” vandalized their tent and threatened to decapitate all of them 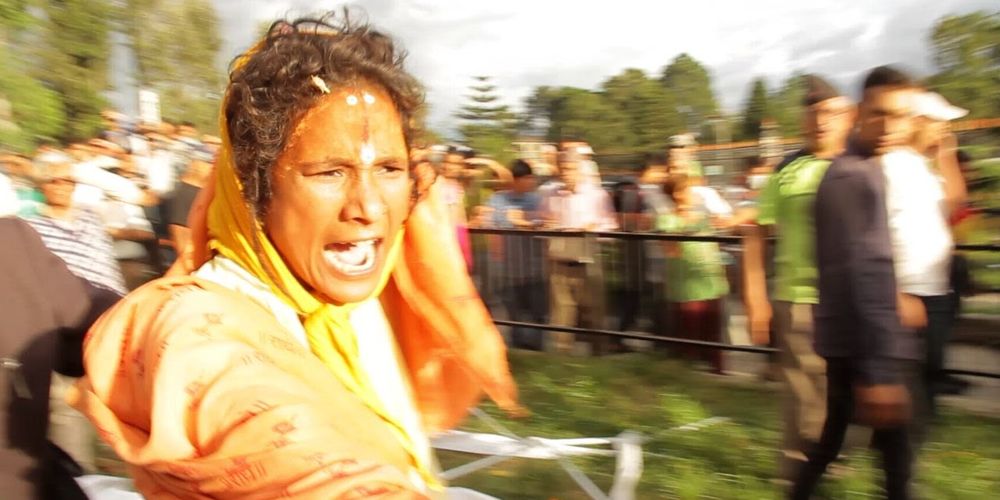 The feminist reading group Chaukath couldn’t have made its point clearer in a more ironic way. Their discussion on women’s access and security at public spaces held in Ratna Park on Tuesday evening, August 5, was broken up when a mob comprising a Hindu guru and his disciples attacked the women, calling them “Christians” and “whores.”

The mob, composed of at least two hundred people, overwhelmingly male, tore and trampled upon a small white tent the women had set on the side of Rani Pokhari pond. One brandished a trident. The mob included followers of organizations calling for Nepal to be declared a Hindu state, including Baidik Sanatan Hindu Rastra Nepal, Sansthagat Samyukta Sangharsa Samiti, and Dharma Rakshak Bahini. At times it was led by “youth saint” Shree Shreeniwascharya.

The screaming mob encircled the reading group of about 12 gathered at the public park for more than an hour and chanted slogans in favor of a “Hind]u Nepal.” Murder threats to decapitate and mutilate the participants filled the air. The Record’s reporter at the scene described it as surreal and intensely intimidating.

The women eventually abandoned the location, albeit reluctantly, after they were warned several times by the leaders of the mob to go away or face “anything that could happen, which could be murder.” The police at the scene, despite their efforts to quiet down to mob were unable to assure security to the women.

The group continued the discussions at The City Museum in Durbar Marg, where the guest speaker, Kalpana Viswanath, spoke about the importance of urban planning to make cities safe for women in New Delhi and other South Asian cities.

“Today’s event is a further proof that South Asian culture excludes women from public spaces,” Viswanath said. “We should never forget that everyday harassments of women needs to be fought along with crimes like rapes.”

The deputy superintendent of police, Rajkumar Silwal, told The Record that the mob became excited when it was told (falsely) that it was a meeting of Christians advocating killing cows.

“I was told that a group of Hindus was attacking a group of Christians. But when I got there, I found out that it was a rumor to incite violence. If the victims file complaints at the district administration office naming those involved, we’ll jail the inciters,” he said.

Members of Chaukath repeatedly complained of being treated as a spectacle even before the Hindu mob attacked them.

“The park—which should be a public space for all genders, classes and ethnicities—is today a space mostly used by men. First, we became a spectacle, then victim,” said Kala Rai, a member of Chaukath who thought the police, too, acted unequally by prodding them to leave.

“Our meeting wasn’t about religion, but even if it were, given that Nepal is a secular country, the public space belongs to all religions,” Rai added.

Later, at The City Museum, where the discussion continued until 9 p.m., Rai faced another predicament thousands of women in Kathmandu face everyday.

“It’s dark already, and I’m scared of going home after it gets dark,” she said, and sighed.

Update: At the request of a Chaukhat member who cited security fears, a photograph of the mob with a group member has been taken down. Chaukath would also like to clarify the feminist collective is more than a reading group. You can read more about Chaukath here.

The police and the paramilitary biased against us: Saptari locals

Relationships deteriorate after the police forces killed five Madhesi protesters in the district.

Who will guard the guards themselves?