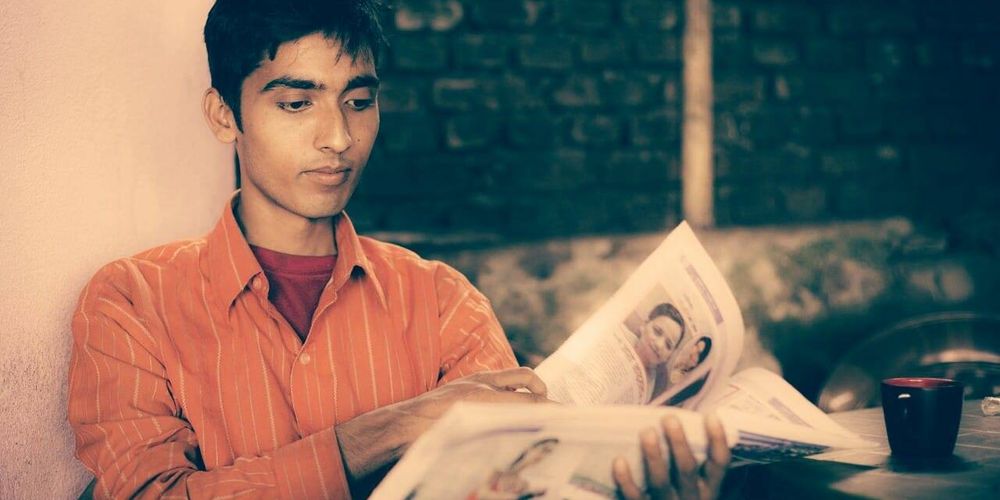 Thakur Prasad Timilsina, alias Rasuwali Kabi, is a writer from Rasuwa district who has published articles and poems in various media outlets. His most well known work is a poetry collection titled

On April 15th, at around 10:30 am, Kabi was drinking tea and chatting with friends at a tea shop in Balaju when about a dozen Armed Police Force (APF) officials barged in and demanded that he come with them for an interrogation. They accused  him of being a supporter of the Netra Bikram Chand ‘Biplab’ led Communist Party of Nepal (CPN), which has recently been labeled as a criminal outfit.

A full body search was conducted on 27 year old Kabi, after which APF handed him over to the Balaju Police Station.

The next day, on April 16th, five of Kabi’s fellow poets and friends visited him in Balaju.

“The police are going to file a case of sedition against the Kabi,” said Jwalamukhi Lamichanne, who met with the police regarding Kabi’s arrest.

“They said that his books are the reason why he has been arrested.” Lamichanne added.

The police allegedly searched through Kabi’s room, and found books related to Karl Marx, Mao and Biplab in his possession.

Arguing that Kabi’s arrest was arbitrary and unjust, a group of writers handed over a memorandum to the Chief District Officer of Kathmandu district on 16th April, demanding his release. Senior writers Narayan Dhakal, Rajan Mukarung and Hangyug Agyaat were amongst the many who took part in the memorandum handover.

On April 19th, campaigners held a program titled Abhibyakti Shwatantrataka Laagi Nagarikharu in Kathmandu. They asserted that Kabi’s arrest was a breach of civil rights and a crackdown on freedom of speech.

“Water, food, and freedom of speech are basic rights that people need in order to live,” said writer Aahuti at the program. “We strongly condemn this government violation of people’s rights, freedom of speech must be respected.”

The police allegedly searched through Kabi’s room, and found books related to Karl Marx, Mao and Biplab in his possession.

Kabi is amongst the over 300 writers, CPN party leaders and cadres who have been arrested in the past couple of months regarding their association with Biplab. Hemant Prakash Oli, alias Sudarshan, was the highest ranking party official who was arrested. Oli is a CPN standing committee member and has published numerous books, including a jail memoir.

It is not only those who are directly involved with Biplab’s party who have been targeted— Raj Bahadur Kunwar, former senior vice chairman of Pragatishil Lekhak Sangh (Progressive Writers Association) was arrested on 15th April and released soon after.

“I was with friends who had come to Kathmandu for medical treatment. The police took me to a room at a hotel in Sundhara and pressed me to name CPN leaders so that they could be arrested. I did not agree to do this, and the Teku police let me go later that night,” said Kunwar.

According to Prakash Dumre, chairman of journalists close to CPN, journalist Jitendra Maharjan is being held in police custody at the Teku station, while  journalists Gopal Chand, Ganesh BK, KB Gurung, Karna BK have been released on bail.

During the Maoist insurgency, the police and the Royal Nepal Army targeted writers. Writers Krishna Sen Ichchhuk and D. Kaudinya were killed after being arrested by the police, while many others were taken into custody and eventually released.

Pushpa Kamal Dahal ‘Prachanda’ led CPN (Maoist) activities were criminalized by the government during the insurgency. Ichchhuk and Kaudinya lost their lives because the government believed that the writers were close to the Maoists.

Pushpa Kamal Dahal is now the co-chairman of the ruling party, and the fact that he is in support of the same censorial regime that banned his own political activities with regards to Biplab is a fact that many have noted with irony.

The Nepali constitution protects freedom of expression, and any Nepali citizen should technically be allowed to freely express their political opinions. But it appears that the incumbent government is following the footsteps of the various governments led by Surya Bahadur Thapa, Girija Prasad Koirala, Sher Bahadur Deuba, Gyanendra Shah, and the Panchayat system at large where any and all critique is thwarted with an iron fist.