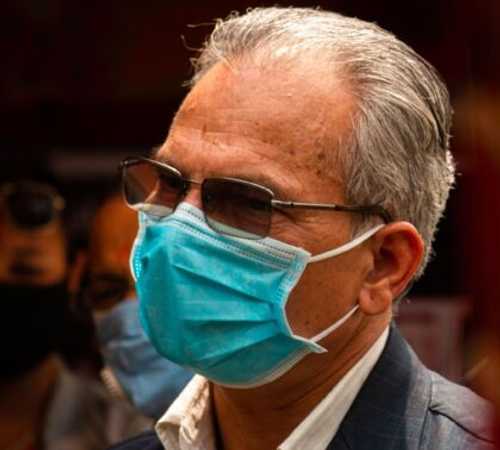 Anyone who has been closely examining his public position on important issues would agree that Baburam Bhattarai is a no-nonsense leader. The former prime minister usually knows what he is talking about, a noteworthy attribute in a country where it's hard to differentiate prime ministers from comedians. Unlike Pushpa Kamal Dahal, Bhattarai seldom changes his public position, although his stubbornness has sometimes cost him politically.

It’s therefore surprising that Bhattarai’s recent allegation about massive corruption in the Budhi Gandaki Hydropower Project is not getting the attention it deserves in the public sphere.

“KP Oli, Sher Bahadur Deuba, and Prachanda have embezzled 9 billion rupees in commission in the Budhi Gandaki Project. Started during my tenure, the project now remains in jeopardy. I can prove my claim if I have to,” said Bhattarai.

On Monday, while addressing a political rally in Parsa District that has now landed in controversy for violating social-distancing rules,  Bhattarai reiterated his claims, alleging corruption not only in the Budhi Gandaki deal but also in the purchase of the Airbus widebody jet by Nepal Airlines, and in the Ncell scam.

Bhattarai did not provide details but did claim that he could furnish proof of massive anomalies in the hydropower project.

Despite the seriousness of the allegation, Bhattarai’s statement has not generated much interest among experts, except on social media. The response in social media has been mixed. Some have accused Bhattarai of using bogus allegations to score political points in his home constituency, while others have begun demanding that concerned bodies look into his allegations.

A few others are bewildered that a person of Bhattarai’s stature had hidden such sensitive information and had been shirking his moral responsibility of exposing corruption--withholding such information constitutes offense that can land public officials in jail.

“On Ashoj 24, I had requested Dr Baburam Bhattarai, via ABC television, to make public the proof of his allegation against the country's three top leaders of embezzling 9 billion rupees. Has he shown the proof? If not, he should be deemed irresponsible,” Nepal Communist Party leader Bhim Rawal tweeted.

Bhattarai’s motive for airing his allegation remains unclear, but the seriousness of the matter warrants investigation--not just because it was made by a former head of the government, but also because vested interests and rampant corruption have long plagued big projects like Budhu Gandaki.

It's a well-known fact that development projects in Nepal have forever been a breeding ground for corruption, mismanagement, and bad governance. Be it donor-funded projects or government-funded ones, most development projects languish for years, or even decades, stuck in the planning process. Most national-priority projects, including the Buddhi Gandaki project, have lain lifeless for decades. The projects on which work has started fare even worse, strangled as they are in red tape, which increases the cost of construction. For example, work on the Melamchi Water Supply Project was started in 1998, but it still hasn’t come into operation--two decades since the project inception. The Melamchi fiasco is representative of how mismanagement and bad governance can hobble projects.

Bhattarai’s allegation is also extremely sensitive because the geopolitics informing the project has turned Budhi Gandaki into a political football.

In June 2016, Pushpa Kamal Dahal’s government had awarded Budhi Gandaki to the China Gezhouba Group Corporation (CGGC). In November of the same year, Sher Bahadur Deuba’s government revoked the contract, claiming that the award process had violated the country’s Public Procurement Act. The Deuba government then decided to build the project using internal resources. Soon after coming to power in 2017, the Oli government again awarded the project to CGGC.

In a white paper on the energy sector unveiled in May 2018, the Ministry of Energy, Water Resources and Irrigation (MoEWRI) had announced that construction work on the project would start before the end of that fiscal year.

Three years on, the project continues to face unexplained delays, and the government has not been able to complete even the work of land acquisition.

Budhi Gandaki is a reservoir project expected to cost at least USD 2.5 billion. It is considered one of the most feasible hydropower projects due to its location and proximity to three power-hungry cities.

Those same characteristics make it one of the most coveted projects in Nepal--one that both India and China want to be involved in. The two governments have  been relentlessly angling to land the project. Officials privy to negotiations related to the project say both neighbours appear determined to snag the deal--whether through enticement or by deploying subtle threats.

New Delhi, for example, has signaled that it will not buy the electricity generated by the project if it is built by a Chinese company. With Nepal’s two giant neighbours locking horns over the project, it will be difficult for Nepal to get the project rolling.

While geopolitics has certainly complicated the matter, the bigger problem has to do with Nepal’s homegrown issues. Despite the country’s potential for hydropower, more than half of Nepal’s population still lives in darkness, with powerful leaders and their cronies holding up big projects for the sake of petty personal gains. A few, like Upper Tamakoshi, have been languishing due to widespread corruption and lack of accountability.

Before coming to power in 2017, the Oli government had promised to usher in an era of economic growth and development. It was said that hydropower would be the driving factor of that growth. But Nepal has seen very little of those promised benefits. The Oli administration now has just over two years left to prepare a conducive environment for producing the promised 10,000 MW of electricity within a decade.