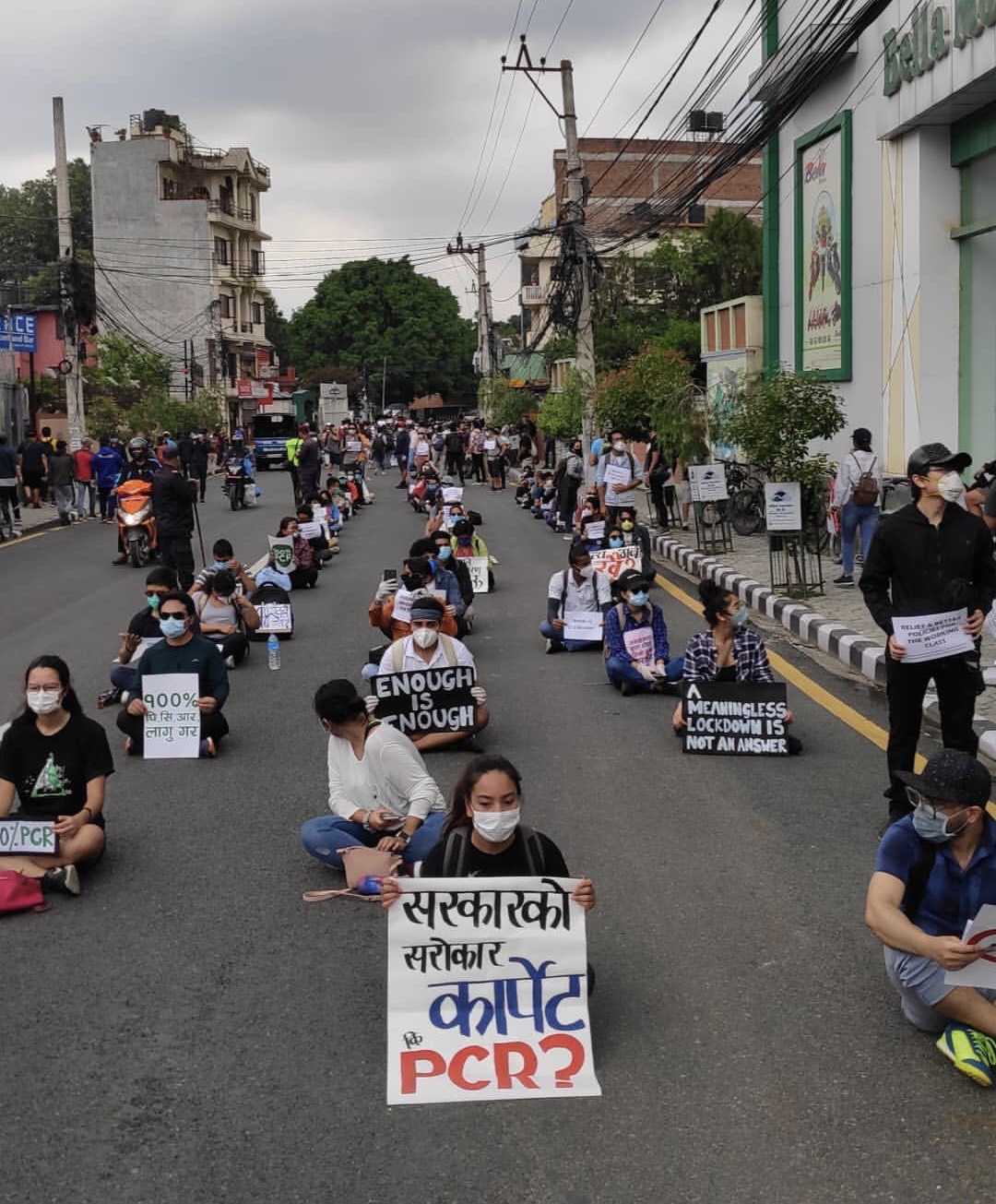 In mid-June last year, nine young people from Kathmandu formed a private group on Facebook, the primary function of which was to act as a platform to talk about the Nepal government’s handling of the Covid-19 pandemic. The group’s members shared news, held discussions, and vented their frustration at the government’s lackadaisical response to the raging pandemic. The group was named Enough is Enough.

These youths, some of whom didn’t even know each other then, had come together to “fight for a good cause”, as Robic Upadhyay, one of first nine members of the campaign, put it.

“In the early days of the lockdown, everyone was talking about the government’s incompetence, and were moved by the scenes of people walking for days to get to their homes,” Upadhyay said. “We friends were all actively sharing articles and expressing our opinions. But there was no platform to channel that frustration.”

Within a week of the group’s formation, the members decided to organise a peaceful protest to place pressure on the government to better take care of the most vulnerable during the pandemic. Until a couple of days before the protest, the group had expanded to 20 people and the team decided to make the group public to reach out to more interested parties. By the day of the protest, slated to take place at Baluwatar near the prime minister’s residence, the group had expanded to over 400 people.

“We learned that everyone was frustrated with the government’s response and a collective voice started to form,” said Upadhyay. After the first protest on June 9, 2020, the now-public group’s membership rose exponentially. Within a week, the group had expanded to almost 100,000 members, and the protests continued. The core members utilised the resources they had -- social media memes and digital posters, slogans and pamphlets, and, of course, Facebook statuses and tweets.

“I think it would be fair to say we facilitated the protests, rather than organised it,” said Upadhyay. “Within a week, there were over 100 protests, small and big, happening around the country. It just grew.”

In the weeks to follow, numerous similar protests, organized on social media by young people, took place across the country.

As internet and mobile phone penetration increases, more Nepalis than ever are taking to social media platforms to call out individuals, organisations, and the government over their alleged misdeeds. The ‘Enough is Enough’ protest in June 2020 might have been the most visible and widespread protest movement organized solely through social media yet, but there are questions about the effectiveness of such movements, especially their longevity.

Perhaps the first instance of a widely popular social media campaign organized largely on social media in Nepal was 2013’s Occupy Baluwatar, which occurred in the wake of Occupy movements taking place all over the world. While the casus belli for Occupy Baluwatar was the rape and robbery of Sita Rai, a migrant worker who had returned from abroad, by airport officials, the movement demanded action against perpetrators for violence against women and an end to impunity.

A year later, in 2014, the #FilltheBucket campaign collected and distributed relief material to victims of floods and landslides in the Far West. But social media activism was perhaps most prominent during the aftermath of the 2015 earthquakes when thousands of individuals in the country and abroad got together virtually to plan relief programs for victims.

Many of the iterations of the more recent Citizen’s Movement -- or Brihat Nagarik Andolan, born in the wake of Prime Minister KP Sharma Oli’s December 20 dissolution of Parliament -- have also been planned and coordinated on social media. However, the Citizen’s Movement is largely facilitated by older activists who have traditional networks to mobilize; social media is simply an added bonus.

The Enough is Enough campaign in 2020, however, was significant because it was the first time that a protest movement organized solely on social media had expanded to cities across the country. This proliferation reflected the exponential increase in the number of internet and social media users in Nepal. As of January 2021, around 24 million people in the country had access to the internet via fixed broadband or mobile connections.

While social media activism and protests organised via virtual platforms are not new across the world, they’re just beginning in Nepal, said Sudhamshu Dahal, a media studies professor at Kathmandu University’s School of Arts.

“Social media has played a big complementary role in driving youths to the streets for their demands,” Dahal said. “Laws have been repealed and swift action during disasters have been possible through social media. Social media criticism has also influenced government decisions, for instance in the Tootle case.”

In 2019, the government decision to ban ride-sharing platforms Tootle and Pathao had invited an uproar on social media. The decision was duly withdrawn.

With the growing power of social media to give voice to those who might have access to traditional forms of discourse, such as newspapers, the television, or the radio, numerous social and political issues have received new attention. For instance, women have taken to social media to tell stories of sexual harassment while misogyny, sexism, xenophobia, and racism are routinely called out.

In February this year, new proposed changes to immigration rules by the Department of Immigration ignited a blaze across social media. The department had proposed that all women under the age of 40 who are leaving the country on a tourist visa must first obtain permission from their families and the local government. Thousands decried the new rule on social media, calling it “paternalistic and parochial”, a new excuse to control women’s movement. The department hurriedly backtracked, clarifying that the rule would only apply to women under 40 leaving the country on a tourist visa for the first time and only those going to the Middle East or Africa.

The last few years have changed the idea of what activism means in Nepal, according to Neeti Aryal Khanal, a professor of sociology at Patan Multiple Campus. In Nepal, activism has always been understood as something that takes place on the streets, where people shout slogans and burn tyres, she said.

“An activist can be anyone who wants to change the status quo,” Khanal said. “Writers can be activists, singers and artists can be activists. In fact, anyone who voices their opinion on social media demanding that something needs to change is contributing to some form of activism. Activism is done to bring change by questioning the status quo and asking for accountability.”

“In many instances, collective voices fizzle out as soon as they rise,” she said.

Indeed, even as more social movements are being planned on the internet, experience has shown that these movements often die out relatively soon. Occupy Baluwatar received sustained attention from the press and the government, with then prime minister Baburam Bhattarai even pledging to address the protestor’s demands. But the movement disbanded in a matter of weeks and there were few efforts to keep up the pressure.

The Enough is Enough campaign has also suffered a similar fate, largely dying down after the first week of protests. Individual members went on hunger strikes to try and keep up the pressure and the government took note, with Prime Minister Oli even visiting the campaigners himself and the government signing agreements. The Nepal government largely moved away from using Rapid Diagnostic Tests for Covid-19, which was one of the major demands of the Enough is Enough campaign. The movement might have contributed to the government’s decision but it would be difficult to attribute the achievement solely to the movement itself.

As of now, the original Enough is Enough Facebook group doesn’t exist anymore and numerous copycat groups have sprung up in its wake.

In a 2010 New Yorker article subtitled “Why the revolution will not be tweeted”, the American writer Malcolm Gladwell argued that whatever changes social media activism may bring about are rather small in scale. According to Gladwell, social media’s biggest strength is also its drawback, i.e., its ability to level the field and provide relatively equal say to everyone.

“How do you make difficult choices about tactics or strategy or philosophical direction when everyone has an equal say?” Gladwell wrote. “[Online activism] makes it easier for activists to express themselves, and harder for that expression to have any impact.”

Much has changed since Gladwell wrote his article. Social media has been instrumental in guiding movements -- from 2011’s Arab Spring to the more recent Black Lives Matter. A recent article, published in the New Yorker in 2020, acknowledged this and gave a slight twist to Gladwell’s thesis: “the revolution will not be tweeted -- at least, not entirely.”

The substance of Gladwell’s article, however, appears to apply to Nepal’s current scenario. Nepali social media activism, says Khanal, fails to last because it is not concentrated and only goes for small victories.

“In Nepal, online activists single out individuals and organizations, which is great, but they also need to look deeper into the society that produces them,” she said. “Activism focused solely on singling out individuals is hollow and it is in this respect that Nepali social media activism seems to be falling behind.”

There are, of course, numerous inherent barriers to the internet in a country like Nepal. Mobile phones might have helped bridge the digital divide somewhat but many Nepalis still remain disconnected from the internet due to poverty, lack of infrastructure, lack of awareness, and illiteracy. With internet access and social media use still largely limited to the cities and urban centers, the issues that become agendas for social media activism might not resonate with those living in rural areas, or even with the population at large. A vocal minority on social media can make issues seem larger than they really are.

But for Upadhyay, who is a photographer and documentary filmmaker, their success in organizing the Enough is Enough protest proves that it is possible to do so entirely through social media “if the cause is genuine and if it resonates with youths.”

“I think it has also set an example,” said Upadhyay. “That protests can be peaceful, unlike the violent student protests of yesteryear. And also that with a weak opposition, our democracy had a vacuum, and the youths tried to fill that vacuum.”