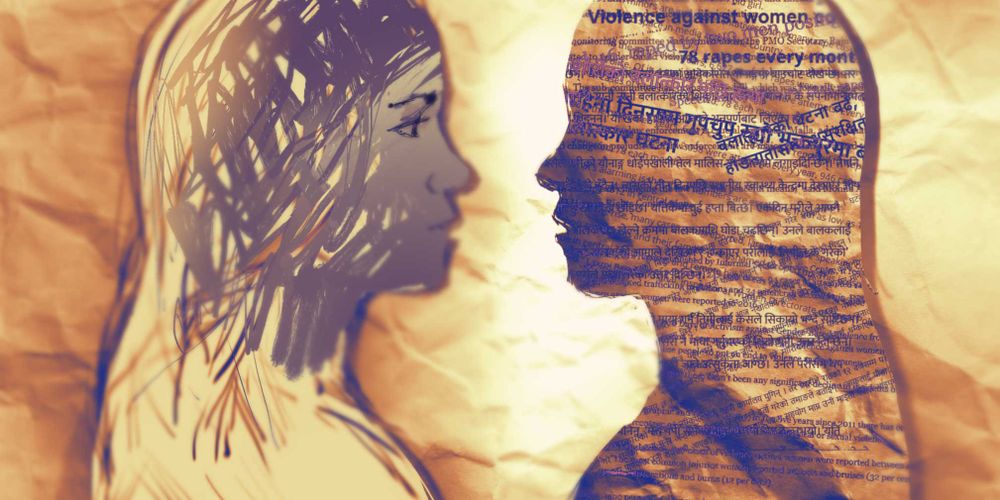 There are at least half a million women in Nepal who have experienced some form of sexual violence. Reported rapes have increased over the years, rising from 317 reported in 2007 to 1131 in 2017. Yet, given the statistics on the prevalence of rape, this number remains under-reported.

Rape cases in Godamchaur, Durbarmarg and other locations in early 2018 renewed public discussion on sexual violence. Women’s rights advocates also turned attention to flaws in Nepal’s news media when addressing the topic, such as the use of stereotyping illustrations, sensationalist language in reporting, and insensitive behavior towards survivors.

Because of the sensitivity required in covering stories of sexual violence, news media and news organizations around the world have set ethical journalism guidelines on writing such pieces. To understand the scenario in newsrooms of Nepal, The Record, in collaboration with feminist podcast Boju Bajai, interviewed nine Nepali journalists and editors who shared their working style and their views on how the media’s reporting could be improved.

[Please use the player below to listen to Boju Bajai's companion podcast episode to this piece, This is how Nepal's news media covers rape.]

Absence of guidelines and training in newsrooms

None of the five newsrooms the interviewees worked in had written guidelines for covering rape and sexual violence. Decisions about framing and presenting the story were left largely to the journalists’ own devices, or hashed out over office meetings which tended to revolve around pedantics like the choice of words and legalese, rather than the conceptual structuring of the story. Journalists stressed that news reporting on sexual violence had become more sensitive overall than in the past. Having said that, a number of recent news articles have still used sensationalist language, lingered on voyeuristic details, or disclosed too much information that identified the survivor.

Also lacking is discussion around the visuals used in articles on rape and sexual violence. Many images used in such pieces reinforce stereotypes about sexual violence and rape survivors.

The majority of interviewees believed that basic norms of journalism were sufficient guidelines by themselves. They also attributed the development of their own sensitivity towards the topic to personal reasons or career experience, rather than something learnt through instruction, which points to the absence of institutionalizing this learning so that new journalists can begin with the same level of sensitivity.

While a few had heard of media training on sexual violence conducted by various organizations, none interviewed had personally attended such programs.

Journalists primarily get tips on rape and sexual violence cases from the police. Most of the journalists interviewed mentioned speaking to rape survivors only in a handful of cases. Asides from the difficulties of identifying and reaching survivors, the stigma attached to rape means survivors are also hesitant to come forward. Also, journalists covering the stories are usually men while most stories are about female victims.

Getting information from the police is also not without caveats. “Having heard from survivors about the harassment they face at the police station itself, I am doubtful of how much accurate information we can get from them,” said Kalpana Ghimire, former journalist at Kantipur. Survivors had told her that some cases of rape had been mediated by the police themselves.

Women underrepresented in the newsroom

Women are underrepresented in journalism. According to the Global Media Monitoring Project 2015 report, only 23 percent of reporters in the papers, TV and radio in Nepal were women. Among the 13,050 members of the Federation of Nepali Journalists (FNJ), a national umbrella organization for journalists, only 18 percent are women. Freedom Forum’s report on gender in nine national dailies (Kantipur, Gorkhapatra, Nagarik, Annapurna Post, Naya Patrika, The Kathmandu Post, The Rising Nepal, The Himalayan Times and Republica) found that in 2017, of the 4330 bylines recorded in the research, 5.4 percent were female while 53 percent were male.

None of Nepal’s broadsheet dailies or national television networks have women editors.

Women had nominal presence in the newsrooms surveyed. The crime beat was almost entirely men. Also, none of Nepal’s broadsheet dailies or national television networks have women editors.

“I don’t find women in decision making levels [in the papers], which makes it difficult for me to push some of these stories or ask for support,” said Kalpana Ghimire.

The journalists interviewed stated that there was an unspoken hierarchy of topics in the newsroom, with issues regarding women and children often relegated to interns and younger recruits. “Seasoned reporters don’t usually cover stories of sexual violence,” said Janakraj Saptoka, crime beat reporter at Kantipur. “Political news is seen as the most important.”

When sexual violence does get covered, it is often confined to newsbytes. There are also few follow-ups to such cases, which can take years to conclude. “These issues need to become a campaign,” said Manish Gautam, formerly at The Kathmandu Post’s crime beat. “We need to look at trends, tie in opinion pieces and report on relevant activism, creating a discourse—as in the case of Sita Rai.”

“We need to look at trends, tie in opinion pieces and report on relevant activism, creating a discourse..."

The 2012 Sita Rai rape sparked Occupy Baluwatar, a protest movement against violence against women that lasted 107 days. The protest received significant coverage from both national and international papers.

“The coverage of the protest and the issues was so intense that at one point people showed up to the protests out of fear of ostracization if they didn’t attend,” said Dewan Rai, who covered the protests as The Kathmandu Post’s journalist. “There were none who considered themselves intellectual who did not come. That is when I realized what media pressure could do.”

A beat by itself

Journalists agreed that reporting needed to go beyond incidents and into wider sociological and cultural concerns, and include collaboration with experts of other fields. They recommended that newsrooms provide more support and resources to journalists covering cases of sexual violence; work that can be drawn out and very different from the daily news grind.

Institutional weaknesses are also visible. While Nepal Press Council’s code of conduct requires respecting the privacy of victims of sexual violence, there is no history of strong action against violators. A blatant example of journalistic callousness towards victims is the Shrisha Karki case. Uddhav Bhandari, a former policeman, had photographed actor Karki after forcing her to pose nude. Kishor Shrestha, editor of Janastha, published the photos in October of 2002 without Karki’s consent. A few days later, Karki committed suicide. Shrestha, on the other hand, is now the acting president of the Nepal Press Council.

The media shapes how rape and sexual violence is perceived by readers—as a phenomenon that must be urgently addressed, or as yet another crime statistic in the background. “It’s time for media houses to consider,” added Sapkota, “whether this topic now deserves a beat by itself.”