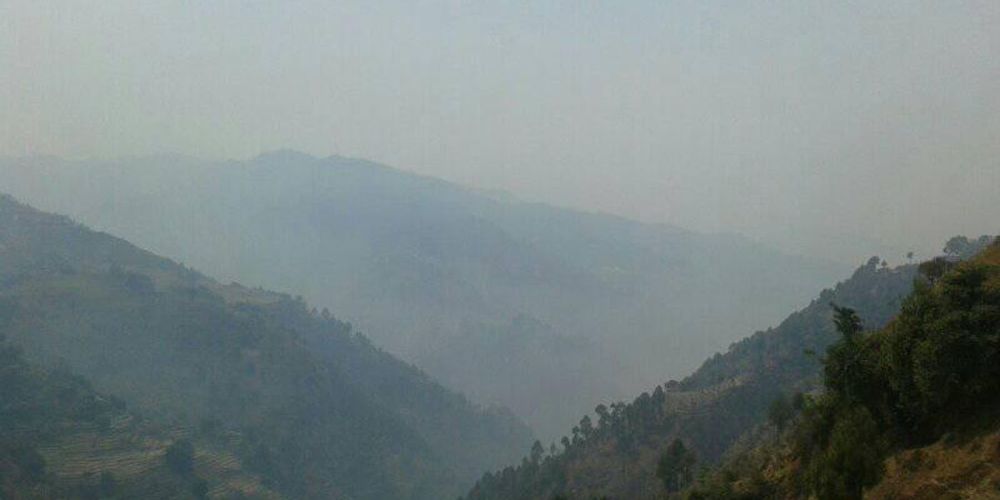 After weeks of hearing about raging wildfires across the country, Kathmandu residents woke up on Sunday to plumes of dense smoke rising from the north. A forest fire had broken out in Tarebhir, on the northern rim of the valley within the Shivapuri Nagarjun National Park.

Rabina Adhikari, who lives nearby in Budhanilkantha, said it was “scary” to see a wildfire just a few hundred meters from her backyard.

“I had never seen anything like this before,” said Adhikari, who tweeted a picture of a cloud of thick smoke spiralling out from Shivapuri’s lush green forests. “We felt helpless; all we could do was watch the fire from a distance and hope that the authorities take care of it before it gets worse.” 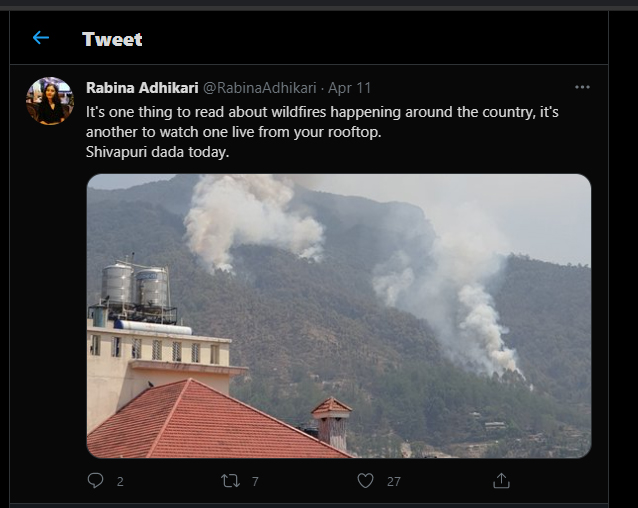 As the day progressed, another forest fire broke out in Telkot, on the foothills of Nagarkot to the east of Kathmandu.

The past few weeks have seen an unprecedented number of wildfires break out across the country. Hundreds of forest fires, particularly in the mid-hills and the Tarai, have destroyed thousands of trees and blanketed the entire country in a thick haze of smoke. Over the last seven days alone, 115 wildfires have been documented by the Nepal Disaster Risk Reduction Portal. Subsequently, air quality dropped across the country, particularly in Kathmandu, which made headlines for being the most polluted city in the world. Light showers over the weekend had helped alleviate the pollution a little but on Monday, the air quality index (AQI) in Kathmandu was once again at “very unhealthy” levels of above 220, according to data published on airnow.gov, a US-based website that monitors air quality. AQI levels between 200 and 300 are considered “very unhealthy” and can lead to serious health effects.

While forest fires take place every year during the dry season, the record-breaking number recorded this year has left local governments and disaster response units scrambling to control the damage. Over the past nine years, forest fires between November and March, which is prime wildfire season, have hovered in the hundreds, never crossing a thousand. This season, between November 2020 to March 2021, there were 2,700 wildfires, a nearly 15-time increase from last year.

“This situation was not projected for this time of the year,” said Anil Pokharel, who leads the National Disaster Risk Reduction & Management Authority. “And the peak is yet to come. If we aren’t able to control the fires, there could be a disastrous scenario here, like in Australia and California, where people lose their lives and homes.”

So far, forest fires have not reached many settlements and there have been few human casualties. But there are already signs that it is only a matter of time. Last week, a forest fire in Surkhet burned down eight homes.

Pokharel believes that low pre-monsoon rainfall, following an extended winter drought, has exacerbated the fires this season which are likely to continue to burn in the days to come. This would mean a further spike to already high levels of air pollution, especially in valleys like Kathmandu and Pokhara, whose bowl-shaped geography traps pollutants in the air for longer periods.

Public health experts warn that air pollution levels now constitute a significant public health risk and that unless preventive measures are taken, the respiratory health of citizens across the country is very likely to suffer.

“What’s happening now with forest fires and air pollution is of historic proportion, but there hasn’t yet been a response of the same level. Where is the urgency?” said Dr Anup Subedee, an infectious disease specialist at HAMS hospital. “If business as usual continues then the consequences will be disastrous, with more people at a younger age developing respiratory ailments.”

Children are especially at risk from air pollution as they tend to breathe in and out more frequently and their still-developing bodies are more sensitive to hazards, according to the World Health Organization. Lung damage from air pollution in the early years can be “irreparable”.

For parents with kids who already have health issues, the spike in air pollution in recent weeks has meant more anxiety. Jenny Gurung’s seven-year-old son has asthma and the thick haze in her hometown of Pokhara has meant that he is at higher risk of developing respiratory problems

“Since school was closed for nearly a week, we made him wear a mask at all times, even at home,” Gurung said. “But he is a kid after all and would sometimes take it off while playing, which really worried me.”

Luckily, the skies cleared without her son complaining of serious breathing issues. But Gurung says that it is distressing to know that she will always have to live in fear for her son’s health as long as pollution levels keep rising.

“There is only so much we can do, taking precautions and all, hoping that one day the air will be clean enough for my son to breathe without worrying about falling sick,” she said.

Besides the immediate health hazard posed by polluted air, experts warn that prolonged fires across the country, many of them in hilly areas, will greatly reduce forest cover, which may in turn exacerbate the annual devastation wrought by heavy rainfall-induced landslides.

Madhukar Upadhya, who has studied watershed and natural resources management, says it is time to shift our attitudes towards these incidents and look at it from a broader climate perspective. Forest fires in districts like Taplejung and Manang in the winter could be indicators of shifting patterns.

“A wildfire isn’t an isolated event; there are many factors that go into making it as destructive as we have seen this year,” said Upadhya. “A dry winter, combined with the drying up of springs across the mid and upper hills of the country, could have exacerbated the fires.”

Forest fires take place in Nepal every year, but earlier, the effects were less devastating as forests had pockets of moist soil due water seeping up through the ground from underground aquifers and springs.

“The spring season used to be more green and less dry, and moist lush pockets in the hills worked as fire breakers,” said Upadhya. “But now, everything's adding up as rainfall is more erratic, water sources have dried up, and people are migrating away from the hills, leaving fewer people to put out small fires.”

Beyond the forest fires’ immediate destruction and the resulting air pollution, experts warn that such incidents could worsen disasters during the monsoon. While there isn’t an exact number on how many hectares of forest cover have been destroyed by the months-long fires across the country, the loss of shrubs and grass cover in the mid-hills could lead to more mudslides during the monsoon.

Bijay Kumar Singh, who has extensively studied Nepal’s Chure region, says that wildfires in the sensitive Chure hills could have a lasting impact on the ecology of the area and the communities living there.

“In ecologically fragile zones like the Chure, where there already isn’t sufficient grass cover, a sustained blaze will probably reduce whatever little cover that exists to ashes by the time the fire is controlled,” said Singh. “There will then be a higher risk of soil erosion and debris flow in the monsoon, which could lead to more devastation.”

“While we may not have enough ground to link these forest fires directly to climate change yet, we know that actions like open pit burning, increasing reliance on fossil fuels, and domestic industrial emissions from vehicles and brick kilns are contributing to the rising air pollution in cities like Kathmandu,” said Anustha Shrestha, an environment researcher at the Institute for Social and Environmental Transition. “We have the policies and strategies to tackle them, all we need to do is implement them.”