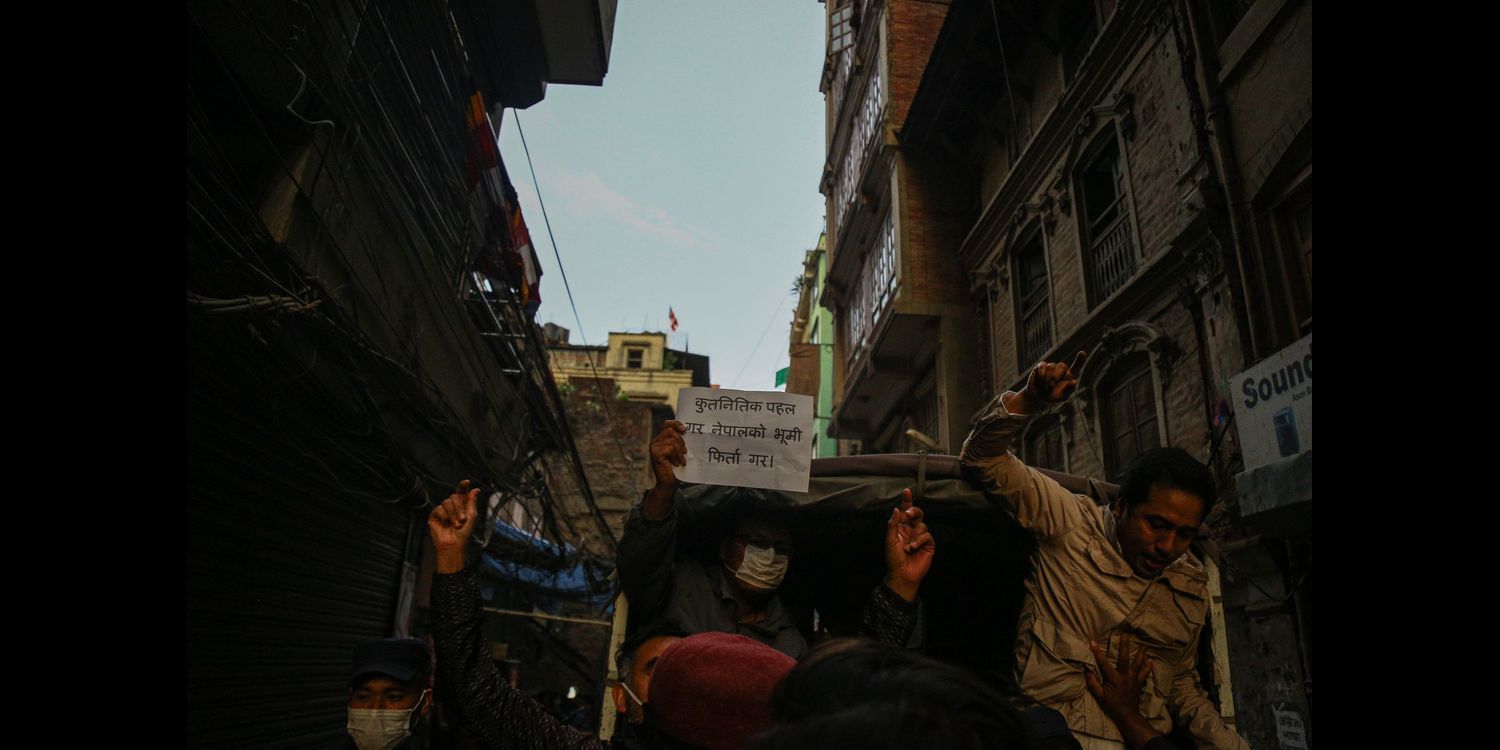 China has always counseled Nepal to maintain a healthy relation with our southern neighbour India, despite the unconcealed reality that New Delhi wants to thwart every move made by Kathmandu to creep closer to Beijing. It is actually quite a mystery among Nepalis why China provides such counsel. One can surmise that China does not want to jeopardize its relations with India over Nepal. Equally, such a stance also impacts global perception, which itself occupies an important place in international relations. But how does China actually perceive Nepal-India relations? Everyone knows that Beijing reckons that Nepal-India relations are rooted in cultural and civilizational ties, which are undergirded by people-to-people relations. This contrasts with the Nepal-China relationship, which is for the most part informed by the interests of Nepal and China.

For the Nepali public, it’s not difficult to infer India’s intentions. One merely has to observe the latter’s behaviour. But historically, the Nepali public has had very few opportunities to get acquainted with the Chinese mind. Thus, up until now, we have been able to observe only the overt behaviours of the Chinese. We have not been able to deeply understand how China actually thinks when it comes to Nepal, and especially, how it views Nepal-India relations.

How does China Think?

India claims South Asia as its traditional sphere of influence. However, with the alarming growth of China’s presence in South Asia, through Chinese investment and aid, India’s claim over its traditional sphere of influence has definitely shrunk. But such aid and investments by China make for merely the discernible aspects of China’s diplomacy. What motives trigger such actions? China’s intent is probably not only limited to checking Indian influence in the region, because there have been some rare occasions when both nuclear powers didn’t contest certain contentious claims--indeed, when they actually resorted to collaborating together to resolve issues. India’s recent announcement of the pilgrimage route to Kailash Mansarovar via Lipulekh Pass, in Nepal, seems to have resulted from that same kind of India-China quid-pro-quo thinking.

In 2015, when Nepal was focused on dealing with post-earthquake relief, rehabilitation, and reconstruction, India and China, without Nepal’s consent, decided to use Nepal’s Lipulekh as a trading point. That agreement between India and China not only stirred controversy in Nepal, but also raised questions about the intent of Nepal’s two immediate neighbours. Besides dwelling on anti-India sentiments, the public in Nepal often wonders why Beijing agreed that New Delhi could use this route, given that Nepalis have always regarded China as a friendly and welcoming neighbour. And this despite some of us knowing that Chinese President Xi Jinping and Indian President Narendra Modi agreed on the Lipulekh corridor without Nepal’s consent. The 41-point agreement, signed on May 15, 2015 between China and India, called for, among other things, “enhancing border-area cooperation through border trade, pilgrimage…and to expand border trade at Nathu La and Qiangla/Lipu-Lekh Pass and Shipka La”.

Understanding India’s motives and intent behind their interventions in Lipulekh is not difficult. What’s startling is that amidst the current pandemic--when Nepal has closed its borders with India and China--New Delhi chose to inaugurate a new Kailash Mansarovar pilgrimage route via Lipulekh Pass. What makes the move strategic is that its inauguration wasn’t done by the Ministry of Road Transportation and Highways, but by the defense minister himself. India’s strategic interest in Nepal dates back to the 1950s, when the Indian leadership recognized the Himalayas as a defensive bulwark. On December 6, 1950 Prime Minister Nehru stated in the Indian Parliament that “from time immemorial, the Himalayas have provided us with a magnificent frontier…we cannot allow that barrier to be penetrated because it is also the principal barrier to India”.

The construction of the Indian road linking Uttarakhand’s Pithoragarh with Kailash Mansarovar via the Lipulekh corridor probably stems from India’s security interests regarding Nepal, though the route is ostensibly identified by India as a pilgrimage route. In fact, it has been named “Kailash Mansarovar Yatra”. And it is not mere coincidence that India decided to announce the opening of the new route in the middle of the lockdown, when no pilgrim will be able to travel to Kailash Mansarovar, at least in the foreseeable future. But the route leads to Kailash Mansarovar, which lies in China’s Tibetan Autonomous Region (TAR).

When the Araniko Highway, meant to link Nepal’s capital to the Chinese border, was being built, Chairman Mao had said that “once these roads are opened, India may be a bit more respectful of you”. Today, China’s acceptance of India’s new route to Kailash Mansarovar through Lipulekh not only weakens Nepal’s claim over Lipulekh, but also starkly exposes the limitations of small states like Nepal.

In recent years, the trade volume between India and China has increased significantly, and both nations are eyeing an all-weather trading route to further expand bilateral trade over land routes. Although the two countries share a 3,488km land border, the Nathula Pass is the only functioning trade route between them. And the Nathula Pass is not a route that remains open year-round. In fact, the pass was closed after the 1962 India-China War, reopening only in 2006. Hence, Lipulekh presents the best alternative to the Nathula Pass for increasing India-China trade and connectivity via land.

It’s also notable that the year 2015 wasn’t the first time that both these Asian giants agreed upon the Lipulekh route. In this regard, Nepal’s ‘historical amnesia’ needs to be condemned. In 1954, India and China agreed to permit India’s Mansarovar-bound pilgrims to use Lipulekh Pass for the first time. Further, in 1999, during Indian External Affairs Minister Jaswant Singh’s visit to Beijing; in 2005, when Chinese Premier Wen Jiabao visited New Delhi; and in 2014, when Chinese President Xi Jinping visited India, both countries discussed the issue of using the Lipulekh route for trade and pilgrimage. These meetings clearly indicate that India and China do not have divergent views on Nepal’s claim to Lipulekh. But that makes the Nepali public wonder why China is planning to extend the Qinghai-Tibet railway to Nepal’s border with India--when New Delhi and Beijing have already jointly decided to use Lipulekh Pass as a trade corridor.

While Nepal was waiting for the Chinese response to India’s constructing a road inside Nepal’s territory, we learned that Indian and Chinese soldiers were injured in a cross-border clash during a face-off at a remote crossing point near Tibet. Once again, the Nepali public puzzled over the contours of the Sino-Indian relation, and struggled to delineate the nuances of how the two nations view their relation through their prism of conflict, cooperation, and competition. Although the Xi-Modi Wuhan meeting of 2018 aimed to stabilize their bilateral relation, the relation is still plagued by border problems, struggles pertaining to global governance, and their contest for regional supremacy. All these issues have actually made for a major 21st century rivalry. Nonetheless, whenever China and India cooperate on some issues pertaining to the TAR, while confronting each other on other TAR issues, Nepalis can’t fathom what is actually happening.

Kathmandu has always looked to Beijing whenever Delhi attempts to dilute Nepal’s sovereign right as a modern state. When Nepal promulgated its new constitution in 2015, China welcomed it unconditionally, whereas India greeted the statute with a blockade that eventually obliged Nepal to sign the Transit and Transportation agreement with Beijing in 2016, which provided Kathmandu access to the Chinese port of Tianjin. Today, Nepal has access to seven Chinese sea and dry ports, and Beijing has become a significant player in Nepal’s politics and economy. And yet, Nepal isn’t sure whether China will respect its territorial integrity or not, even as Kathmandu awaits Beijing’s response to India’s announcement of the Lipulekh route. Nepal’s lack of confidence in its relationship with China has been undeniably undercut by its recurring failures in understanding China’s motives.

Nepal could have better understood China’s motives in 2015, when China paid no heed to Nepal’s calling out its neighbors over Lipulekh. Also, Nepal could have diplomatically lobbied its cause after 2015, despite its small-state syndrome, and asked Beijing not to ink further agreements over Lipulekh. For now, instead of merely hoping that we will someday figure out Beijing’s stance on Lipulekh, it would be better if Nepal could realize that without understanding Beijing’s motives, Nepal’s hopes and aspirations about working with the northern neighbor, mainly on matters related to growth-oriented prosperity and infrastructure-propelled development, cannot be materialized. More importantly, that understanding needs to percolate down to the public as well.

I had to fight my family, the party, and the state to get where I am