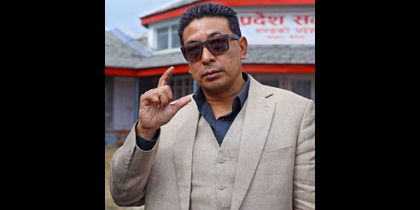 Nepal Communist Party (NCP) leader Agni Sapkota was sworn in as the Speaker of the Federal Parliament on Monday, January 27. He was elected unopposed to the post on Sunday after the opposition parties chose not to field any candidates for the race.

Sapkota’s election has drawn widespread backlash from human rights activists and conflict victims who had been demanding the ruling party withdraw his nomination citing his alleged role in the killing of a school administrator during the Conflict.

Senior advocate Dinesh Tripathi had filed a writ petition at the Supreme Court on January 24, seeking a halt to the election process. But the hearing scheduled for Sunday was postponed. In his petition, Tripathi also requested the court to order Sapkota’s immediate arrest.

The post of the Speaker had been vacant since October 1 following the resignation of then incumbent Krishna Bahadur Mahara over rape allegations. After a month of factional wrangling, the NCP nominated Sapkota as a consensus candidate.

Following his victory, Sapkota told the media that he would work in an impartial manner to uphold the dignity of the House.

Sapkota, who has a pending case at the Supreme Court is listed as absconding by the Nepal Police. He was elected in the parliamentary election from Sindhupalchok district.

Police on Thursday, January 23, arrested Gandaki Provincial Assembly member Rajib Gurung aka Deepak Manange, for allegedly assaulting Milan Gurung, the president of the Kaski chapter of All Nepal Football Association (ANFA). Milan had filed a complaint at the Kaski district court demanding action against Manange, a day after he was manhandled and beaten by Manange at a public function. Manange, a gangster-turned-politician, had allegedly attacked Milan for not taking proper care of football players from his constituency in Manang who were in Pokhara to participate in a football tournament. He was released on bail on Sunday.

The government has appointed new office-bearers for the Truth and Reconciliation Commission and the Commission of Investigation on Enforced Disappeared Persons amid opposition from conflict victims, rights groups and the international community.

Chief Justice Cholendra Shumsher Rana administered the oath of office to the two chairmen and sworn in members from both commissions at the Supreme Court on January 23.

The appointments have been widely criticized for being political in nature and for failing to address victims’ concerns and demands over the need to amend the TRC Act before forming commissions.

The election was held to fill up the positions of 19 current NA members who are completing their two years tenure on March 3. Of the outgoing assembly members, nine are from NCP, seven from Nepali Congress, two from Rastriya Janata Party Nepal and one from Samajwadi Party Nepal.

According to the Election Commission, the NCP won 16 seats, while RJPN won two seats. Meanwhile the Nepali Congress lost seven seats and the Samajwadi Party lost one seat.

Finance Minister Yuwaraj Gyawali, who was appointed by the President based on the recommendation of the government, is also retiring on Monday. Some notable new faces in the Assembly include NCP spokesperson Narayankaji Shrestha and Beduram Bhusal, an ideologue of the communist party.

No respite for protesting farmers

Minister for Industries,Trade and Commerce Lekhraj Bhatta has said that the government was working to settle all outstanding dues owed to sugarcane farmers who have been protesting for months now over delayed payments by mill owners.

Speaking at a program in Dadeldhura on January 23, Bhatta said more than 70 percent of farmers have already received payment from the sugar mills following the ministry’s intervention.

“All payments will be settled in the next few weeks,” he said.

The plight of the sugarcane farmers received wide coverage in the media after a group descended in the Capital and held strike at Singha Durbar.

Despite Bhatta’s claim, news reports show that many farmers are yet to receive their payment for their yields which have been pending since last few years.

On January 25, sugarcane farmers burnt tyres and protested outside Sagarmatha Sugar Mill in Sarlahi demanding immediate payment of the due money.

Speaking at a program held at his residence on Wednesday, Dahal said that Bhattarai and Rai were wasting their time in futile endeavors.

"They are welcome to join NCP and work in our nation building effort instead of creating hurdles under various pretexts," Dahal told reporters.

Bhattarai was Dahal's immediate deputy and a key ideologue of the UCPN (Maoist Centre) and served as Nepal’s prime minister from 2011 to 2013. He quit the party to form Naya Shakti, later joining hands with Upendra Yadav to form Samajwadi Party.

Rai had broken away from then UML party citing reservation over party's position on state restructuring.